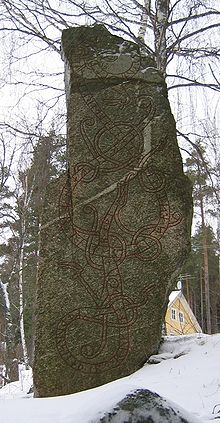 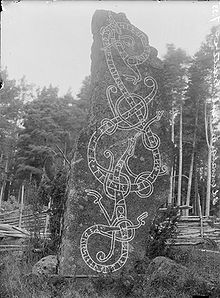 The Näsby Runestone, designated as U 455 under the Rundata catalog, is a Viking Age memorial runestone that is located in Näsby, Uppland, Sweden.

The Näsby Runestone memorializes a family tragedy. It was raised by a man in remembrance of his parents who had both drowned. The design on the granite stone, which is three meters in height, consists of runic text that is inscribed on the bodies of thin beasts. The inscription is well preserved, with none of the runes damaged.[1] The inscription is classified as being carved in runestone style Pr4,[2] which is also known as Urnes style. This runestone style is characterized by slim and stylized animals that are interwoven into tight patterns. The animal heads are typically seen in profile with slender almond-shaped eyes and upwardly curled appendages on the noses and the necks. The inscription, although unsigned, for stylistic reasons is attributed to the runemaster Fot,[3] who was active in the mid-eleventh century.

Transliteration of the runes into Latin characters