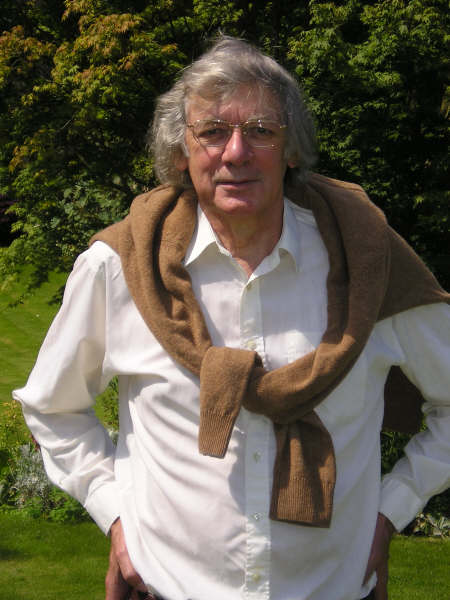 Ted Honderich (born 1933) is a British philosopher, Grote Professor of the Philosophy of Mind and Logic, and Visiting Professor, . His work has been mainly about five things: determinism's truth and its consequences for our lives; the nature of and its relation to the ; right and wrong in the contemporary world, in particular with respect to ; the supposed justifications of by the state; and the political tradition of .

Honderich was born Edgar Dawn Ross Honderich on 30 January 1933 in Baden, Ontario, Canada. An undergraduate at the , qualifying as B.A. (Hons) in Philosophy and English Literature, he came to to study under the Logical Positivist , graduating with a in 1968. He has since lived in England and become a British citizen. After being a lecturer at the he became Lecturer, Reader, Professor and then Grote Professor at University College. He was visiting professor at the and . He is author of many books and articles on such subjects as the correspondence theory of , Russell's theory of descriptions, , , Mill's "On Liberty", and against on and defence of Marx's theory of history. He has also edited several series of philosophy books.

He has been involved in controversy for his moral defence of Palestinian , despite his justification of the founding and maintaining of in its original 1948 borders.

His papers in philosophical journals have been published in three volumes by Edinburgh University Press. He has appeared on radio and television, is the editor of "The Oxford Companion to Philosophy", has written a philosophical autobiography, and is Chairman of the Royal Institute of Philosophy. He is married to Ingrid Coggin Honderich.

In "A Theory of Determinism: The Mind, Neuroscience and Life-Hopes", Honderich expounds a theory of as well as other lawlike connections. This he uses to formulate three hypotheses of a deterministic . They are argued to be true, mainly on the basis of neuroscience. The clarity of is contrasted with the obscurity of the doctrines of or .

Honderich argues that both views are mistaken, since freedom as voluntariness and freedom as origination are each as fundamental to our lives. The real problem of the consequences of determinism is not choosing between the two traditional doctrines, but a more practical one: trying to give up what must be given up, since we do not have the power of origination. Honderich's rejection of both traditions has been taken up by other philosophers, many of whom find his criticisms decisive. The theory is summarised in his "How Free Are You?: The Determinism Problem".

Honderich's Union Theory of mind and brain is defended in "A Theory of Determinism". The Union Theory takes it as possible that conscious events like our choices and decisions are in a way subjective but are nevertheless physical rather than near-physical events. They stand in a kind of lawlike connection with neural events, sometimes called the of mental events on neural events. These psychoneural pairs, as Honderich calls them, are just effects of certain causal sequences, and are causes of our actions. This sort of physicalism, a predecessor to the notion of supervenience, has since been succeeded in Honderich's writings by the near-physicalism of Radical Externalism. Radical Externalism holds that perceptual consciousness does not have a nomic sufficient condition in a head but only a necessary one. Honderich argues that reflective and affective consciousness are different again. He also argues that this is consistent with contemporary , rescues us from the argument from or , and also from the dubious conclusions of theory and .

The Principle of Humanity

Honderich argues that the Principle of Humanity is that what is right always consists in what, according to the best available knowledge and judgement, are actually rational steps, effective and not self-defeating ones rather than pretences, to the end of getting and keeping people out of bad lives. Bad lives are defined as those deprived of six fundamental human goods: a decent length of life, bodily well-being, freedom and power in various settings, respect and self-respect, the goods of relationship, and the goods of culture. It is a principle, but not the , nor just the claim that the ends justify the means. Honderich argues that the principle is fundamental to but not the whole of a morality of humanity. This, he claims, includes certain policies of equality and inequality and certain practices, one being a better than we have. Honderich concludes that the Principle of Humanity is better supported than any other sort of moral principle, on the basis of both consistency and certain facts. He takes it that non-consequentialist reasons are not really reasons at all, nor, he says, does the Principle grant any distinction between acts and omissions.

Following , Honderich published "After the Terror". The book first lays out some of the facts of bad lives and good lives, both in Africa and in rich countries. With respect to bad lives, Honderich argues that our omissions have resulted in 20 million years of possible living-time lost by a certain sample of Africans. He also considers the creation of in 1948 and records what he describes as the bad lives of Palestinians as a result of what is called the neo-Zionist expansion of Israel since the 1967 war. Honderich asks whether those in the rich societies do wrong in doing nothing about bad lives. He considers natural morality as well as our worked-out or philosophical moralities. Such outlooks as and such ideologies as and are also considered, as is what Honderich calls 'hierarchic democracy'. The Principle of Humanity is used to judge our moral responsibility for the many bad lives, which Honderich tells us is great. The Principle also condemns the terrorist killings of as hideous. The killings were not rational means to an end that was partly defensible. The West's subsequent attack on is excused. But the taking from Palestinians of at least their freedom in the last fifth of their homeland, historic , is condemned. Honderich writes: '...the Palestinians have had a moral right to their terrorism as certain as was the moral right, say, of the African people of South Africa against their white captors and the apartheid state'.

Honderich claims that we need to see the power of our societies as deadly. Americans, first of all, because of their unique power, need to think more carefully about their actions. He also argues that we should supplement our democracies with the transformations of the civil disobedience of , , , and those in Eastern Europe who brought down the wall.

His later book, "Humanity, Terrorism, Terrorist War: Palestine, 9/11, Iraq, 7/7..." begins by asking if analytic philosophy in considering large questions of right and wrong should proceed by embracing , , or the like. Honderich, finding these means of judgement wanting, again takes up the Principle of Humanity. The book justifies and defends Zionism, defined as the creation of Israel in its original borders, but also reaffirms that Palestinians have had a moral right to their liberation -- to terrorism within historic Palestine against what Honderich calls the ethnic cleansing of Neo-Zionism, the expansion of Israel beyond its original borders. After a further consideration of 9/11, there is an analysis of 10 reasons for what he calls 'our terrorist war' in Iraq. Honderich condemns the war as morally barbaric, given the foreseen and thus intentional killing of many innocents. In condemning the 7/7 terrorist attack on , Honderich considers the importance of horror to morality. He also argues that and are friends rather than enemies of terrorism. The book ends with a postscript on the charge of anti-semitism against critics of neo-Zionism -- a charge Honderich says is principally a part of Neo-Zionism or at least something insufficiently detached from it.

In "Punishment: The Supposed Justifications", Honderich surveys and analyses 14 traditional, backward-looking reasons for the justification of by the . Most have to do with desert or retribution, others with annulment or consent. All are found to be weak or worse. Honderich then argues that the strong tradition of punishment must have in it some real content or argument. This is found to be that punishment is justified by giving satisfaction to grievance-desires --doing no more than satisfying them. This, Honderich concludes, is the reality of , but it cannot be an effective justification of punishment. The Utilitarian prevention theory of punishment is also rejected, because it justifies certain victimizations. Mixed theories of punishment, drawing on backward-looking considerations as well as the notion of prevention, sometimes in terms of the of offenders, are also found to be untenable. Robert Nozick's theory in particular is examined. Honderich's conclusion is that the long-running problem of the justification of punishment is now dead. Its justification must be in terms of its consequences -- in discouraging and licensing certain kinds of behaviour. The live issue is determining what these are. Honderich's answer has to do with the Principle of Humanity. Punishment is or would be justified when it rationally takes forward the humanization of our societies. He argues, on the basis of this, that most punishments are in fact wrong.

Honderich's book "Conservatism" begins with a general inquiry into the distinctions between British and American . He argues that one has to do with eternal values and therefore with rather than change, a view underpinning Edmund Burke's condemnation of the and all conservatives since. Other distinctions have to do with the right kind of political thinking and with human nature, with particular doctrines of incentive and reward, and with certain freedoms, including those of private property. Given these distinctions which set conservatism apart from other views, Honderich asks what underlies and brings these distinctions together. What is the rationale or underlying principle of conservatism? The answer he gives is not just that the conservative tradition is selfish. Its self-interest, he argues, does not distinguish it from other political traditions. What does distinguish it, Honderich concludes, is that it lacks a moral principle to defend its self-interest. It is unique in its . "Conservatism" was much discussed not only by political philosophers but also by politicians in 1990. It was enlarged as "Conservatism: Burke, Nozick, Bush, Blair?" in 2005, and includes Honderich's consideration of whether Britain's is truly in the conservative political tradition.

Honderich has been involved in controversy since the publication of his book "After the Terror" in 2002. Honderich arranged with in Britain and the publisher of "After the Terror", Edinburgh University Press, to have the £5,000 advance on royalties go to the charity, along with more money from the publishers. The Canadian newspaper "The Globe and Mail" suggested that Oxfam was taking money from a terrorist sympathizer, and it then declined the contributions, for which it was judged adversely in the British media. The book was published in a German translation. Mischa Brumlik, director of a holocaust centre and Professor of Pedagogy at , demanded publicly that the book be withdrawn from sale by the publisher, Suhrkamp Verlag. Despite the declaration by the philosopher , who had recommended the translation, that the book was not anti-semitic, it was withdrawn from sale. Honderich demanded the dismissal of Brumlik from his professorship, for violation of academic principle. There was a media firestorm in Germany. The book was retranslated and republished by an antizionist Jewish publishing house, Melzer Verlag [T. Honderich, "The Rise and Fall of a Book in Germany", March (2005) [http://www.ucl.ac.uk/~uctytho/BrumlikSumbyTH.html] ] . Lesser controversies have included an imputation of anti-semitism by a student newspaper in London, against which Honderich took successful legal action. There have been attacks by Palestinians on Honderich's justification of Zionism too, including disruptions at meetings. [T. Honderich, "On Being Persona Non Grata to Palestinians Too" CounterPunch, March (2005) [http://www.counterpunch.org/honderich02192005.html] ]

Honderich wrote a number of papers in criticism of Donald Davidson's , and in particular made the objection that on certain assumptions the view is . The papers are reprinted in "Mental Causation and the Metaphysics of Mind", edited by Neil Campbell. Earlier journal papers are about Austin's , , , Russell's , and John Stuart Mill's essay "On Liberty". Honderich's philosophical autobiography, "Philosopher: A Kind of Life", is a personal and general picture of English academic life over several decades. An encyclopedia edited by him, "The Oxford Companion to Philosophy", is in its second edition.