Distemper is a term with a variety of meanings for paints used in decorating and as a historical medium for painting pictures. The binding element may be some form of glue or oil; these are known in decorating respectively as soft distemper and oil bound distemper. 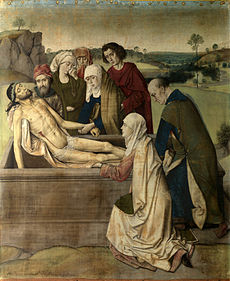 Distemper is an early form of whitewash, also used as a medium for artistic painting, usually made from powdered chalk or lime and size (a gelatinous substance). Alternatives to chalk include the toxic substance, white lead.

Distempered surfaces can be easily marked and discoloured, and cannot be washed down, so distemper is best suited to temporary and interior decoration. The technique of painting on distempered surfaces blends watercolors with whiting and glue. "The colours are mixed with whitening, or finely-ground chalk, and tempered with size. The whitening makes them opaque and gives them 'body,' but is also the cause of their drying light...a source of considerable embarrassment to the inexperienced eye is that the colours when wet present such a different appearance from what they do when dry."[1] 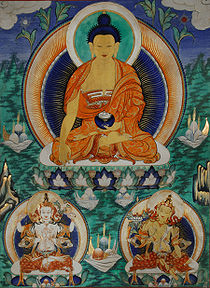 Many Medieval and Renaissance painters used distemper painting rather than oil paint for some of their works.[2] The earliest paintings on canvas were mostly in distemper, which was (and is) also widely used in Asia, especially in Tibetan thankas. Distemper paintings suffer more than oil paintings as they age, and relatively few have survived. It was the commonest medium for painting banners and decorations for temporary celebrations, both of which attracted artists of the highest quality, especially when they were official court artists. In distemper painting, "the carbonate of lime, or whitening employed as a basis, is less active than the pure lime of fresco...to give adhesion to the tints and colours in distemper painting, and to make them keep their place, they are variously mixed with the size of glue (prepared commonly by dissolving about four ounces of glue in a gallon of water). Too much of the glue disposes the painting to crack and peel from the ground; while, with too little, it is friable and deficient in strength."[3]

In modern practice, distemper painting is often employed for scenery painting in theatrical productions and other short-term applications and also cheaper than oil paint. Contemporary artist John Connell, was known for using distemper in paintings sometimes as large as ten feet. [4]

Examples of paintings in distemper