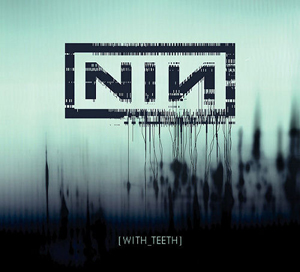 "With Teeth" is the fifth studio album by American act , released in 2005 on . The album was produced by Nine Inch Nails frontman and long-time collaborator . Reznor ultimately described the album as "13 songs that are friends with each other".

Following the release of the band's previous album, "" (1999), Trent Reznor struggled with addiction. "That was the path I chose", Reznor told "Spin" in 2005. "I was going to just drink myself or drug myself out of it. I got back to after the "Fragile" tour, and I'd pretty much lost my soul." After Reznor hit bottom and decided to go to rehab, he began work on a new album. The songwriting process moved along easier for Reznor than in the past. He said that was due to having "a pretty good game plan [...] I had themes and subjects [...] As my brain started working, the songs just started to come out. I regained my self-confidence."

Reznor originally planned the album to be a , complete with a storyline. "I'd come up with this kind of elaborate storyline, and the record was gonna be a concept record that had a number of pretentious elements to it," Reznor said. "I was gonna talk about multi-layered reality and waking up in a dream you can't wake up out of, and eventually finding acceptance after you go through this period of trying to fight it. It was all kind of a big analogy for me getting sober." [ [http://www.roadrunnerrecords.com/blabbermouth.net/news.aspx?mode=Article&newsitemID=69127 BLABBERMOUTH.NET - 'Year Zero' Not NINE INCH NAILS' First Attempt At Concept Album ] ]

Reznor recorded the album at Nothing Studios in New Orleans, the last release he recorded at the location before permanently relocating to Los Angeles.

Early reports indicated that the album had a working title of "Bleed Through". [cite web
url = http://www.billboard.com/bbcom/news/article_display.jsp?vnu_content_id=1000507555
publisher = "Billboard
first = Jonathan
last = Cohen
title = Nine Inch Nails Prepare To 'Bleed'
accessdate = 2008-02-27] Reznor stated that the name was eventually changed because "it was supposed to be about different layers of reality seeping into the next, but I think some people were thinking about blood or a commercial." [cite journal
title = Hot Albums for 2005
journal =
issue = 1038
month=January | year=2005] Mixing began on , and on New Year's Eve Reznor revealed that the album was complete, as well as the album's final title.

Before the release of the album, fans were able to listen to "With Teeth" in its entirety by attending listening parties that took place in 13 cities throughout the U.S. Anyone who attended received promotional posters and stickers. Those who pre-ordered the album received a limited edition 7" containing the single "The Hand That Feeds," as well as the track "Home."

Reznor also released multitrack files for a few of the songs. In retrospect Reznor said, "That whole idea of putting up multi tracks, really was just, several years ago, bored in a hotel room [...] just as an experiment I happened to have the multi tracks with me--I think I was doing press for "With Teeth"--I loaded up "The Hand That Feeds" and made it as a multi track, in Garage Band. [...] I thought it would be cool to give the sound to people, and I knew the challenge would be to get that past Interscope, essentially giving the masters out. But they agreed."

Before its release, Reznor would describe "With Teeth" as "more song-oriented", "much more lean" than "", and "just straight to the point." [cite web
last = Baltin
first = Steve
url = http://www.rollingstone.com/news/story/5937146/nine_inch_nails_let_it_bleed/
title = Nine Inch Nails Let It Bleed
publisher = ""
date =
accessdate = 2008-02-27] Reznor said he "tried to keep a lo-fi aesthetic running through it, a kind of carelessness." The album's lyrics tackle Reznor's relationships with himself, the world in general and where he fit into it, and his addiction troubles from previous years that almost claimed his life. Although it dealt with these issues, Reznor was hopeful that it was still "disguised enough that [it was] not a terribly boring record about recovery and addiction". Moreover, he stated the music was less of a , and more of "a collection of songs that are friends with each other, but don't have to rely on each other to make sense". [cite web
url = http://www.mtv.com/bands/n/nin/news_feature_050509/index3.jhtml
title = The Upward Spiral
publisher =
month = May | year = 2005
accessdate = 2006-12-18]

Reznor also drew influence from the , which occurred shortly after his recovery. The album's first single, "", was a direct example of the themes of protest and propagandistic fear that helped influence the album.

An interesting side-note is that the first song, "All The Love In This World", was originally part of the soundtrack to the game . [http://www.idsoftware.com/games/quake/quake/]

Critical response to the album was generally favorable, with an average rating of 71% based on 22 reviews on .

Other critics panned the album, however, such as who labeled the album as "shtick".

Nine Inch Nails supported the album with the "Live: With Teeth" tour. The touring lineup featured , , , and . Midway through the tour, Dillion was forced to stop playing due to a medical condition. He was initially replaced by , and then later by .