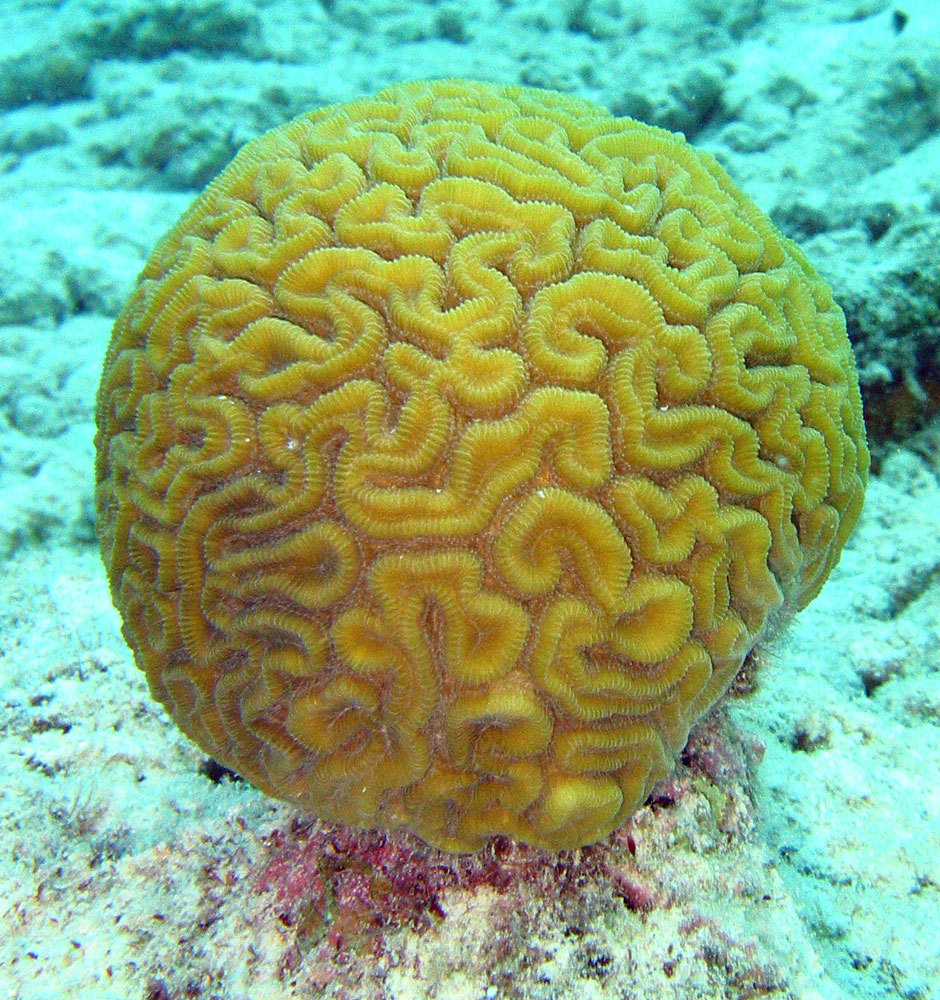 
Scleractinia, also called Stony s, are exclusively marine animals; they are very similar to s but generate a hard skeleton. They first appeared in the Middle and replaced tabulate and s that went extinct at the end of the . Much of the framework of coral reefs is formed by scleractinians.

There are two groups of Scleractinia:
*Colonial corals found in clear, shallow waters; they are the world's primary -builders.
*Solitary corals are found in all regions of the oceans and do not build reefs. Some live in , polar waters, or below the down to 6000 meters.

As mentioned above, Scleractinians may be solitary or compound. The most common forms include conical and horn-shaped scleractinians. In a colonial Scleractinia, the repeated by the polyps causes the corallites to be interconnected, thus forming the colonies. There are also cases in which the adjacent colonies of the same species form a single colony by fusing.

The skeleton of an individual scleractinian is known as a corallite. Each of its radially-aligned elements, termed , lies in the flanked by the members of a mesenterial pair. The skeleton originates as a thin basal plate from which the septa arise vertically. The structure of both simple and compound scleractinians is light and porous, rather than solid as in the .

Septa are secreted by the and are therefore added in the same order as the mesenteries. As a result, septa of different ages are adjacent to one another, and the symmetry of the scleractinian skeleton is or . This pattern of insertion is termed "cyclic" by paleontologists. By contrast, in some fossil corals, adjacent septa lie in order of increasing age, a pattern that is termed serial and that produces a bilateral symmetry. Scleractinians are distinguished from the Rugosa also by their pattern of septal insertion. They secrete an aragonitic exoskeleton in which the septa are inserted between the mesenteries in multiples of six.

In scleractinians, there are two main secondary structures:
* Stereome is an adherent layer of secondary tissue, which covers the septal surface. It consists of transverse bundles of aragonitic needles and protects the scleractinians. However, its function can be nullified by the thickening of the septa itself.
* Coenosteum is a perforated complex tissue that separates individual corallites in a compound scleractinians.

Scleractinians fall into one of two main categories:
* Zooxanthellate
* Non-zooxanthellate

In zooxanthellate corals, the are replete with . These symbionts benefit the corals because nearly 95% of the organic carbons produced by zooxanthellae are used as food by the polyps. The oxygen byproduct of photosynthesis and additional energy derived from sugars produced by zooxanthallae enable these corals to grow as much as three times faster than if they had no symbionts present. These corals are restricted to shallow (less than 200 feet - 60 meters), well-lit, warm water with moderate to brisk turbulence and abundant oxygen and prefer firm, non-muddy surfaces on which to settle.

There are two main hypotheses about the origin of Scleractinia. The closest scleractinian analog in the is the , which suggests direct, possibly , descent, with different scleractinian suborders having originated in different rugosan families. The second hypothesis suggests the similarities of scleractinians to rugosans are due to a common non-skeletalized ancestor in the early Paleozoic. Recently discovered Paleozoic corals with aragonitic skeletons and cyclic septal insertion - two features that characterize Scleractinia - have strengthened the hypothesis for an independent origin of the Scleractinia.