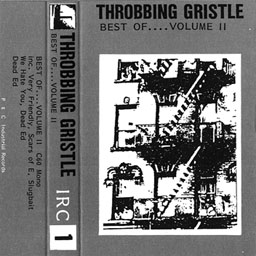 "Best Of.... Volume II" is a cassette release by industrial group , and was the second ever released material by them. It was originally handcopied and limited to 50 copies, but later rereleased in the original TG24 cassette boxset. Its catalogue number was IRC1, which helps to explain why the first Throbbing Gristle album, , had a catalogue number of IR2. This was speculated to be given a full release as IR1, though that never came to pass. However, a number of tracks were rerecorded for , which presumably would've been released as IR1, though as it was never released within Industrial Record's lifespan, the next recorded album was releasd under IR2.

The studio recording of "Very Friendy" is the same exact version from "Best of Vol. I", except that the ending is a bit cut off. "Scars of E" is also from the same source, but with less laughing at the end, and a much shorter introduction with a fade-in. "Short Instrumental" was also recorded as "Not Quite" on "Nothing Short Of A Total War" and "Dead Bait" on "The First Annual Report". "10p For A Pack Of Cigarettes" was also recorded under the same name on the "New T.G." cassette bootleg, as well as "10 Pence" on "The First Annual Report". "Slug Bait" was also recorded a few other times in the studio. There are two takes of it on the "Nothing Short Of A Total War" cassette bootleg, as well as an incomplete version on "New T.G.". The version of "Slug Bait" included here sounds almost exactly like the first take of it on "Nothing Short Of A Total War", except that it is missing the announcement by Genesis. "We Hate You" is the same exact version that appeared on the later single, and it sounds like it was recorded during the same session with the "10p For A Pack Of Cigarettes" included here.The rest of the songs here were recorded live, and can be found on IRC2 and IRC3.