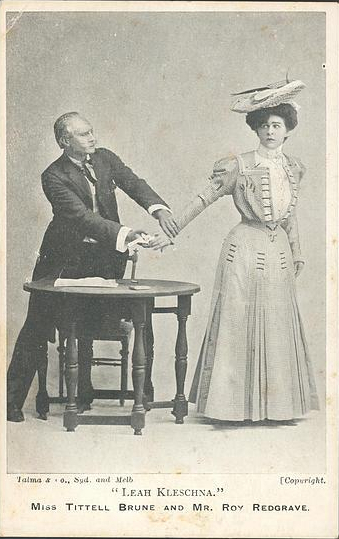 Roy Redgrave (, [According to IMDB/Internet Movie Database it is sourced as "1871"] &ndash; ) was a stage and . Roy Redgrave was the eldest son of George Augustus Redgrave, a maker of the board game Bagatelle, and Zoe Beatrice Elsworthy Pym and was the patriarch of the Redgrave acting family.

Born George Edward Redgrave in , a district of in in 1873, he was by 1897 professionally known as 'Roy' Redgrave apparently in the belief that he was descended from Rob Roy. The Redgrave family originated in the Northamptonshire village of and a tentative link has been established to another Northamptonshire village Stowe Nine Churches in the early 16th century. Redgrave also assumed the middle name "Elsworthy" from his mother Zoe Beatrice Elsworthy Pym, and his sister took the stage name Dolly Elsworthy.

About this time Roy fell in love with a young actress named Esther Mary Cooke, (known on the stage as Ettie Carlisle), daughter of Victor Cooke, huntsman and riding master. Ellen discovered the affair and Ettie fled England for . Roy followed her to South Africa and persuaded her to return to England in 1903. They had one son, Victor (later known as Victor Carlisle).

At some point Roy left for Australia alone. In the "History of Australian Theatre" archives, the American actress Tittell Brune made her first appearance in Australia on 21 September 1904 at , in the play "Sunday", supported by Roy Redgrave. Roy toured with her on the circuit. According to Corin Redgrave, Ellen (Judith) pursued Roy to Australia, arriving in time to pay his unsettled hotel bills. Ellen was unable to persuade him to return him home with her to his family. Ellen remarried Frederick John Nettlefold, a respectable landed gentleman in 1907.

However Roy did return to England, appearing in at the Grand Theatre, , where he met Daisy Bertha Mary Scudamore. They married at Glasgow Registry Office in 1907 while touring in the north and had one child, the actor Sir born on 20 March 1908, later to become the father of actors Vanessa, Lynn and Corin.

Six months after Michael's birth, Redgrave left for again, this time permanently. William Anderson, a Melbourne producer, had just built the King's Theatre, and needed actors. His name appears in June 1909, when he performed in the play "The Bank of England". The following year, Anderson, known for his fondness of the lurid and sensational, had Roy collaborate with him on a play about the just ended Crippen case. Crippen was hanged in November 1910. The play was called "By Wireless Telegraphy", but there is no record that a production came out of it. In 1911, Anderson was ruined financially by an expensive flop, and had to lease away his King's Theatre, and Roy turned his attention to the new and burgeoning film industry, under contract to Lincoln-Cass Films. He appeared in several s, beginning in 1911 with "The Christian". Later he played the villain in "" (1913) as well as six shorts, played the lead in "The Hayseeds" (1917), and co-starred in "Robbery Under Arms" (1920). Back in England, the forsaken Daisy had changed her name to Margaret and married Captain James Anderson, a wealthy tea planter.

Roy remained in Australia until his death sometime in the 1920s, but exactly where he lived and when he died remained a mystery to his family in England until his granddaughter visited Sydney with her then husband John Clark, and vowed to find him. Their search ended at the library, where, as she recounts in her play "" (page 48), they came up with Roy's obituary, learning that he had died on , and was buried at South Head Cemetery. There they learned that he had been put in an unmarked grave by somebody called Minnie, who paid 15 shillings. (The idea that it may have been the religious Minnie Tittell Brune feeling sorry for him is enticing). They found the spot, and arranged for a , asked his son Michael what it should say, and he said to put, simply, "Roy Redgrave, Actor". It was later discovered that Roy married an Irish widow named Mary Leresche in 1916. His marriage certificate makes reference to his previous marriage to Ellen (Judith) but not to his subsequent marriage to Daisy (Margaret Scudamore). Mary died in 1948.