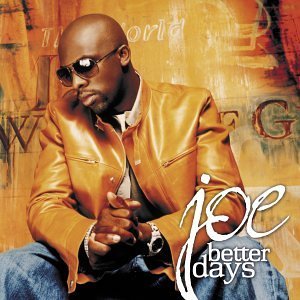 "Better Days"' is the 4th studio album from singer Joe. It was released in December 2001.

The album was released in on , with a bonus track titled "It Won't End".

On his fourth project, Better Days, he diplays his growing versatility as an evidently serious recording artist. His work has great depth expoloring serious and relevant human issues and expresses genuinley deep, honest emotion. He has an undeniable flair for ballads with such offerings as What If A Woman, Alone and Isn't This The World. The gentle and sensual musical arrangements which have all the emphasis and elements of the modern day R&B sound are all beautifully mellow with each holding an undeniably timeless appeal.

To begin with, only two songs feature guests, and one of those songs, "Let's Stay Home Tonight," is a rather straightforward remix for the rap audience featuring . The other collaboration, "Ghetto Child," is a bit more ambitious, featuring Shaggy and The Boys Choir of Harlem. Elsewhere, the emphasis is on Joe. There isn't a roll call of big-name producers here (though do make a showing), so Joe is left to carry much of the album's weight. He proves more than capable of the challenge on songs like the lead single, "Let's Stay Home Tonight," but too often these songs recycle the same songwriting techniques and find Joe revisiting the same motifs over and over. In sum, this plays like a pop album -- a few obvious standout singles and lots of repetitive filler. However, if you're looking for a few quality singles rather than a consistent album, you should find this to be an engaging album, even if its rushed and ultimately thin on original ideas.

"Better Days" was nominated for the 2003 for "Best R&B Album". "Let's Stay Home Tonight" was nominated for the 2003 Grammy Awards for "Best Male R&B Vocal Performance". R&B love man Joe (if you need to write him a check, his last name is Thomas) spent a fair part of the '90s working a number of variations on the romantic soul crooning style that makes women of all ages blush at 100 paces. He's known for his sensual vocals and lush, smooth R&B production. That hasn't changed on Better Days, as Joe seems to still be the original smoothie, laying down heartfelt evocations of love and lust with skill and verve. But the lyrical subject matter is a bit wider than on Joe's previous albums, as he takes on larger social issues (witness the collaboration with Shaggy and The Boys Choir of Harlem on "Ghetto Child" for example). Despite the broadened thematic material, though, Joe never gets too high-minded to leave behind the likes of the undeniably carnal "I Like Sexy Girls." And the sexy girls undoubtedly reciprocate.