The Unit Interventie Mariniers (Unit Intervention Marines, UIM), formerly known as the Bijzondere Bijstands Eenheid (BBE), is an elite Dutch special forces unit, which is specially trained for intervention missions. It consists of a selection of specially trained marines of the Dutch Marine Corps, and it is part of the Maritime Special Operations Forces (MARSOF), which is the maritime counterpart of the Dutch Army's Korps Commandotroepen.

The Unit Interventie Mariniers is a special forces unit that is specialized in counter-terrorism operations. It is able to operate in and outside of the Netherlands, with emphasis on maritime special operations. This also includes long-range reconnaissance, direct action and military assistance operations, both foreign and domestic, often in conjunction with SF units of the Maritime Special Operations Forces (MARSOF).

Similar units are the French GIGN and German GSG 9. 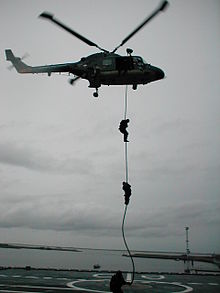 On 22 February 1973, the Dutch government officially created a specialist counter-terrorism unit in response to the Munich massacre, when 11 Israeli athletes were murdered by Palestine pro-Fatah militants. The government felt the urge of protecting the nation against such incidents in the future, and so members of the Dutch Marine Corps were selected for this special unit. Marines were chosen because, at that time, they were particularly notorious: Dutch marines are hardened, highly trained, professional soldiers. The creation of an counter-terrorism unit within the Marine Corps would help relieve the Corps from this negative image.

On July 1, 2006, a new government organ, Dienst Speciale Interventies (DSI) was founded. This is a joint operations centre for counter-terrorism actions in the Netherlands. Members of the UIM and special police units work together, and form a Unit Interventie, which is a joint task force of Defence and police personnel.

The Dienst Speciale Interventies is the joint operations centre for domestic CT operations, and it combines special units from the Ministries of Defence and Justice. These units are:

The UIM (or BBE Mariniers prior to 2005) has seen a lot of action since its creation. The first real intervention mission was the recapture of the Scheveningen prison in October 1974. Operators used hand-to-hand combat and stun grenades against jailed terrorists, who had revolted and held the prison under siege.

The best-known intervention mission was ending the combined siege of a train and a primary school, which was done by South-Moluccan terrorists. The UIM managed to kill the 6 captors on the train during a short but precise raid. Unfortunately, 2 hostages did not survive this. The raid was successful due to the fact that the Royal Netherlands Air Force was called in, with 6 F-104 Starfighter aircraft making very low flypast manoeuvres in full afterburn. This was mainly a distraction, allowing for a swift raid and the killing of the six captors on board. The siege at the primary school ended not long after the train siege had ended.

On 13 March 1978, the UIM responded to a province hall hostage crisis in Assen. The raid came just in time: the hijackers had almost executed two people.

A known operation of the UIM was at on 10 November 2004 in The Hague. The police had tried to arrest Ismail A. and Jason W. (members of the Hofstad Network) in a house at the Laakkwartier, but failed, as three police officers had been injured by grenades thrown at them by the terrorists. UIM operators were ordered to secure and maintain the site. After a successful raid, the two young terrorists were arrested.

In 2008, the UIM had been active in the seas near Somalia as a security detachment for the Royal Netherlands Navy frigate Hr. Ms. De Ruyter, that was tasked with the escort of cargo ships that were contracted by the United Nations' World Food Programme. The unit was deployed several times to fight off pirates that attempted in raiding the ships, and some teams were stationed on some of the ships as well.

In April of 2010, an UIM-team embarked on board Hr. Ms. Tromp re-captured the German container ship MS Taipan off the coast of Somalia, that was under the control of Somali pirates. Though multiple shots were fired, including a machine gun barrage on the ship's bridge, the only injury was an operator that was slightly injured when he fell while storming the ship. A video released by the Royal Netherlands Navy, shows helmet camera footage of the Marines storming and re-taking the ship. [1]

The UIM uses a variety of weapons:

It is important to note, however, that UIM operators have been reluctant to use deadly force in the past, instead preferring to use non-lethal methods, intimidation, and non-discriminate fire (shoot only when being shot at) that enable them to capture instead of to kill.