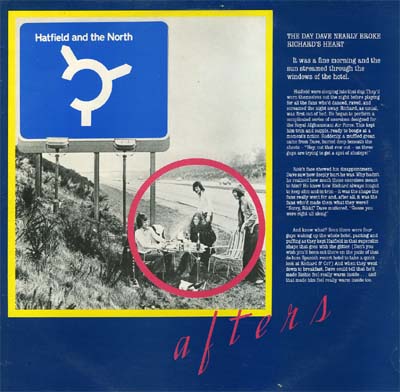 
"Afters" is a 1980 compilation album (LP only) released by band . Of the sixteen tracks, eleven are taken from the band's two studio albums "Hatfield and the North" and "The Rotters' Club", three are live recordings, and the two remaining songs are those from their 1974 single "Let's Eat (Real Soon) / Fitter Stoke Has a Bath". [cite web
url = http://www.iris.dti.ne.jp/~yutayuta/rs/hatfields.htm
title = Track listings and scans of Hatfield and the North records
accessdate = December 3
accessyear = 2006]

Tracks 1 and 2 were released as the A- and B-sides respectively of a 1974 single released on . Tracks 3, 4, 5, 10, 11, 15 and 16 are songs from "The Rotters' Club", tracks 6 to 9 inclusive are from "Hatfield and the North", and tracks 12 to 14 inclusive are edited recordings of live performances in France. [cite web
url = http://homepage.ntlworld.com/andymurkin/Resources/MusicRes/Canterbury/Hatfield/Afters.html#Tracklist
title = Afters
accessdate = December 3
accessyear = 2006]