Types of membership of Opus Dei

Types of membership of Opus Dei 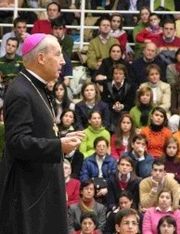 Bishop Echevarria, the prelate of Opus Dei, in a get-together with different members of the Opus Dei prelature and their friends

The Catholic organisation Opus Dei is made up of several different types of membership: 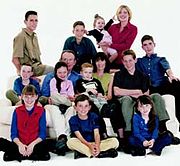 Perrottet family of Sydney. Members are inspired by Catholic teaching that "large families are a sign of God's blessing and the parents' generosity" (CCC 2373).

Supernumeraries, the largest type, currently account for about 70% of the total membership.[1] The term "supernumerary" is a civil designation for an additional member of a society, for example professors, judges, actors, etc.

Toni Zweifel, Swiss engineer, an Opus Dei numerary whose cause of beatification has been started.

Numeraries, the second largest type of members of Opus Dei, comprise about 20% of total membership.[1] Numeraries are celibate members who usually live in special centers run by Opus Dei. "Numerary" is a general term for persons who form part of the permanent staff of an organization.

Both men and women may become numeraries in the Opus Dei prelature, although the centers are gender-segregated, with only minimal contact between male and female numeraries.[2] Numeraries are required to be celibate. Numeraries generally have normal careers and devote the bulk of their income to the organization.[3] According to Opus Dei's 1982 statutes, potential numeraries ordinarily "ought to have a civil academic degree or professional equivalent, or be able, at least, to obtain one after the admission"[4]

The priests of Opus Dei comprise about 2 % of the membership.[1] They always hail from among the male numeraries and associates and have typically lived as lay members for several years before their ordination. At their ordination, they are incardinated into the Personal Prelature of the Holy Cross and Opus Dei, meaning the prelate of Opus Dei becomes their bishop. Priests of Opus Dei observe the same disciplines as numerary members, including living in Opus Dei centers and practicing corporal mortification.

The Priestly Society of the Holy Cross is the association of priests associated with Opus Dei. Part of the society is made up of the clergy of the Opus Dei prelature-- members of the priesthood who fall under the jurisdiction of the Opus Dei prelature are automatically members of the Priestly Society. Other members in the society are traditional diocesan priests--- clergy who remain under the jurisdiction of their diocesan bishop. Technically speaking, such diocesan priests have not "joined" Opus Dei membership, although they have joined a society that is closely affiliated with Opus Dei.[5]

Associates are unmarried, celibate members who typically have family or professional obligations.[3] Unlike numeraries and numerary assistants, the associates do not live inside the special Opus Dei centers.[6]

Those lay faithful are called Associates, who surrender their full life to the Lord in apostolic celibacy in keeping with the spirit of Opus Dei; nevertheless, they must devote themselves to concrete and permanent personal, family or professional obligations which ordinarily lead them to live with their own families. They resolve all these things, at the same time as they fulfil some duty of apostolate or formation in Opus Dei.

To become a member of Opus Dei one has to receive a divine calling or a vocation, a calling which requires practising the modes of the Opus Dei prelature. For this the directors of Opus Dei will have to discern if someone does have the vocation, before allowing him to be incorporated into the prelature.

Incorporation into Opus Dei is done through a written contractual bond between the person who has the vocation and the prelature.

There are some key procedures that be followed for someone to become a member of Opus Dei:

Freedom
In order to join Opus Dei a person must freely ask to do so, in the personal conviction of having received this divine vocation. He may find this out through his prayer and usually with the help of a spiritual director.
Adulthood
In accordance with canon law, no one may be juridically incorporated into the prelature until he has reached 18 years of age.

Nevertheless, from the age of 14 years and 6 months, a young person can show his interest in the organization, and begin to participate in its activities: recollections, retreats, seminars, spiritual direction, apostolate.

Written request
The request is made in writing.

Acceptance by the prelature
The request needs to have been accepted by the authorities of the prelature and admission is granted after a minimum of six months. After a period of at least a year, the interested person can be incorporated temporarily to the prelature by means of a formal declaration of contractual nature. This is known as oblation, and is renewable annually.

Stages of membership: Admission and incorporation

Admission is granted after a minimum of six months.

After an additional period of at least one year since the moment of his admission, the person can be temporarily incorporated into the prelature (oblation) through a formal declaration of a contractual nature, which is renewable annually.

After a minimum of five more years, the incorporation can become definitive. This step is called Fidelity, that ties to perpetuity to the member of the Opus Dei. If the member wishes to leave the prelature, he needs a dispensation which the Prelate alone can grant.

If anyone, before incorporation as a Numerary or Associate is seen to lack suitability for that, he may be retained as a Supernumerary, as long as he has the requisite conditions.

On the part of the prelature: The prelature is committed to provide the member with formation in the Catholic Christian faith and in the spirit of the Work, as well as the necessary pastoral care from the priests of the prelature.

On the part of the person to be incorporated: incorporation means the commitment to remain under the jurisdiction of the prelate in all that concerns the aim of the prelature: sanctity and apostolate in the middle of the world. He is also to observe the norms by which the prelature is governed, and to fulfill the other obligations of its faithful.

In summary, all the faithful of the prelature commit themselves to seeking sanctity and to carrying out apostolate according to the spirit of Opus Dei. This involves, principally, growing in spiritual life through prayer, sacrifice, and receiving the sacraments; using the opportunities that the prelature provides for acquiring a deep knowledge of the doctrine of the Church and the spirit of Opus Dei; and taking part in the task of spreading the Word carried out by the prelature, according to the circumstances and situations of each person.

Cessation of the bond and "lawful" departure

At the end of the term of the contract with the prelature the bond with the prelature of Opus Dei ceases. It can also end earlier, if the member requests for it in agreement with the directors of the Opus Dei. If permission for departure is given it is considered a "lawful departure" ("exitus legitimus" according to the currently applicable Latin version of Opus Statutes).

When someone leaves the prelature lawfully, there is a cessation or ending of mutual rights and duties. Opus Dei does not give back any goods or money received during membership.

29."During temporary incorporation or when the definitive [incorporation] has already been made, for anyone to voluntarily leave the Praelature, he needs a dispensation which the Prelate alone can grant, after hearing from his own Council and Regional Commission".

30."The faithful, either temporarily or finally incorporated into the Prelature, cannot be dismissed except for serious causes which, if it is a question of final incorporation, always ought to proceed from the fault of the faithful person, himself".

"Bad health is not a reason for dismissal unless it has certainly been established that it was deceitfully concealed or dissembled before temporary incorporation".

34."The person, who for whatever reason says farewell to the Prelature or is dismissed by it, can demand no recompense from it for services rendered to it, nor on account of what, whether by [his] industry or exercise of his own profession, or by any title or manner might have been paid him".

In other words, no departing member of Opus Dei may receive any compensation of any sort for the contributions that they may have made to Opus Dei during their time in the organisation, this applies to all categories of membership.

When, however, someone leaves the prelature unlawfully (i.e. without the permission of the Prelate) he or she is considered by continuing members to be in a state of mortal sin, and there is usually no further contact between the ex-member and his or her former friends and associates.

Nevertheless, the Congregation for Bishops states: "The laity incorporated in the Prelature Opus Dei continue to be faithful of the dioceses in which they have their domicile or quasidomicile and are, therefore, under the jurisdiction of the diocesan bishop in what the law lays down for all the ordinary faithful".