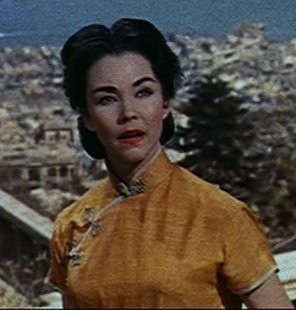 Jones was born Phylis Flora Isley in , the daughter of Flora Mae (née Suber) and Phillip Ross Isley. [ [http://freepages.genealogy.rootsweb.com/~battle/celeb/jenjones.htm 1 ] ] Her parents toured the in a traveling tent show they owned and operated. Jones attended Monte Cassino Junior College in Tulsa and , where she was a member of sorority before transferring to the in in 1938. It was here she met and fell in love with fellow acting student Robert Walker. The two were married on January 2, 1939.

They returned to Tulsa for a 13-week radio program arranged by her father, and then headed for . Isley landed two small roles, first in a 1939 western titled "New Frontier", followed by a serial entitled, "". In these two films, she was billed as "Phyllis Isley" (Phyllis now spelled with two Ls). However, when she and Walker failed a screen test for , they decided to return to .

While Walker found steady work in radio programs, Isley worked part-time modeling hats for the Powers Agency while looking for possible acting jobs. When she learned of auditions for the lead role of "Claudia" in Rose Franken’s hit play of the same name, she presented herself to ’s New York office but fled in tears after what she thought was a bad reading. Selznick, however, overheard her audition and was impressed enough to have his secretary call her back. Following an interview, she was signed to a seven-year contract.

She was carefully groomed for stardom and given a new name: Jennifer Jones. Director was impressed by her screen test as for "The Song of Bernadette" and she won the coveted role over hundreds of applicants. In 1944, Jones won the for her performance as St. Bernadette. That year, Jones' friend, , was also a Best Actress nominee for her work in "For Whom the Bell Tolls". Jones apologized to Bergman, who replied "No, Jennifer, your Bernadette was better than my Maria." Jones presented the Best Actress Oscar the following year to Bergman for "Gaslight". [cite web
url = http://theoscarsite.com/1943.htm
title = All the Oscars: 1943
publisher = the OscarSite.com - A celebration of all things Oscar
author = Gary Moody
accessdate = 2006-12-10 ] Over the next two decades, Jones appeared in a wide range of roles selected by Selznick. Her dark beauty and sensitive nature appealed to audiences and she projected a variable range. Her initial saintly image — as shown in her first starring role — was a stark contrast three years later when she was cast as a provocative bi-racial woman in Selznick’s controversial film "Duel in the Sun". Other notable films included "", "Love Letters", "", "", "Madame Bovary", "Carrie", "", "", "", "Love Is a Many-Splendored Thing", "", "" and "A Farewell to Arms". Her leading men during this period included , , , , , Lord Laurence Olivier, , , , , , and .

The portrait of Jones for the film "Portrait of Jennie", was painted by .

Jones' first marriage produced two sons, (born April 15, 1940), and Michael Walker (born March 13, 1941). Both later became actors. Jones met and began an affair with , which eventually led to her separation from Walker in November 1943 and divorce in June 1945.

Jones married Selznick on July 13, 1949, a marriage that lasted until his death on June 22, 1965. After his death, she semi-retired from acting; her last appearance was a supporting role in the 1974 film "". Jones' only child with Selznick, Mary Jennifer Selznick (August 12, 1954—1976), committed suicide by jumping from a 20th-floor window. This led to Jones's interest in mental health issues.

On May 29, 1971, Jones married multi-millionaire industrialist, art collector and philanthropist , who sadly also survived the suicide death of his son Robert, in 1969. Years before he'd met future wife Jennifer Jones, he had attempted to buy the portrait of her used in the film Portrait of Jennie (1948). Later Simon met Jennifer Jones at a party hosted by fellow industrialist/art collector Walter Annenberg. Norton Simon died in June 1993. Jennifer Jones-Simon is currently on the board of directors of the in Pasadena.

Jones is a survivor. The actress , who died of breast cancer, was married to actor Christopher Jones and named her only child Jennifer Robin Jones in the actress' honor.