All the Way… A Decade of Song

All the Way… A Decade of Song 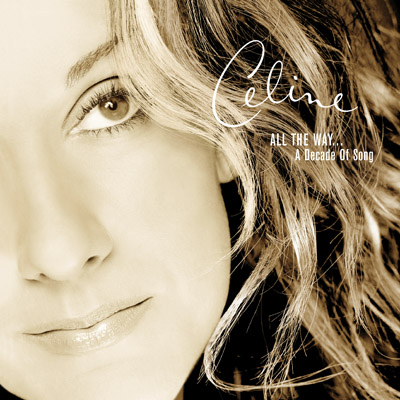 "All the Way… A Decade of Song" is a first English album by Canadian singer Céline Dion, released on . It's her 7th English album and 26th in total.

"All the Way… A Decade of Song" is a compilation of Dion's most successful hits coupled with seven new songs, including the leadoff single "That's the Way It Is," written and produced by a team who worked with , and at that time. Céline Dion performed it live with 'N Sync, during her TV special, presented in late November 1999 to mark the release of the album. The TV special included also guest appearance by .

Céline Dion also worked with Robert John "Mutt" Lange, best known for his multi-platinum recordings with . They recorded "," with Twain on background vocals. The song was originally performed by .

Among new songs recorded for this compilation, there are two other covers: 's "The First Time Ever I Saw Your Face" and 's "All the Way" (recorded as a duet with Sinatra's vocals). The latter was nominated for a .

"" became the last 's song recorded by Dion. Two more tracks written by Warren and produced by were recorded during the "All the Way... a Decade of Song" sessions, but they never made the album. One of them, called "Would I Know" leaked into the internet in May 2005 ( recorded her version in 2003), but the second, "Run Like a River" still remains unreleased.

The last track on the album is an English version of the song "Vivre" from the "Notre Dame de Paris" musical and it's called "."

Later that year she has won a World Music Award for World's Best-Selling Female Pop Artist and two s. In January 2001, she has received an American Music Award for Favorite Artist in Adult Contemporary Category.

An accompanying "" DVD was released in 2001, including videos for seven new songs and eleven older hits.

"All the Way… A Decade of Song" was very successful, selling 22 million copies worldwide, including 8.8 million copies in the United States, 5 million in Europe (1.2 million in the United Kingdom and 1.1 million in Germany), 2 million in Japan [ [http://translate.google.com/translate?u=http%3A%2F%2Fwww.riaj.or.jp%2Fdata%2Fothers%2Fgold%2F200705.html&langpair=ja%7Cen&hl=en&ie=UTF-8&oe=UTF-8&prev=%2Flanguage_tools RIAJ Million single/album recognition work summary] ] and 1 million in Canada.

The album topped the charts around the world, spending 10 weeks at number 1 in Europe, 9 weeks in France, 7 weeks in Belgium Wallonie and Switzerland, 6 weeks in Germany and Austria, 5 weeks in Norway, 4 weeks in Ireland and Finland, 3 weeks in the United States, 2 weeks in Australia, Netherlands and Sweden, and 1 week in other countries.

In the United States, "All the Way… A Decade of Song" debuted at number three, selling 303,000 copies in its first week. In the following week, the album sold 394,000 copies and climbed to number one. In the sixth week, Dion sold an impressive 640,000 copies of her compilation, which marked her biggest weekly sales in the U.S.

In November 2007, "All the Way… A Decade of Song" re-entered the charts in the United States, Japan, United Kingdom and Ireland, just after Dion released her "" album, and few months before the . Although 8 years old album, it managed to re-enter top 20 in Ireland and top 40 in the UK.