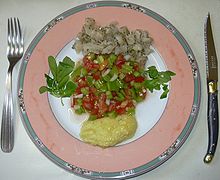 Corn salad grows in a low rosette with spatulate leaves up to 15.2 cm long.[3] It is a hardy plant that grows to zone 5, and in mild climates it is grown as a winter green. In warm conditions it tends to bolt to seed.[4]

Corn salad grows wild in parts of Europe, northern Africa and western Asia.[5] In Europe and Asia it is a common weed in cultivated land and waste spaces. In North America it has escaped cultivation and become naturalized on both the eastern and western seaboards.[6]

Corn salad was originally foraged by European peasants until the royal gardener of King Louis XIV, de la Quintinie, introduced it to the world.[7] It has also been used as food in Britain for many centuries and appears in John Gerard's Herbal of 1597 but only became commercially available there in the 1980s. [8] It was grown commercially in London from the late 18th/early 19th century and appeared on markets as a winter vegetable. See 'Vegetables and their Culivation', Sanders, T. W. 1917. The common name corn salad refers to the fact that it often grows as a weed in wheat fields. [8]

Like other formerly foraged greens, corn salad has many nutrients, including three times as much vitamin C as lettuce, beta-carotene, B6, B9, vitamin E, and omega-3 fatty acids. It is best if gathered before flowers appear.[2]