Accounts of the song's origin vary somewhat, but it grew out of the late 1969/early 1970 nexus of English and American musicians known as , that involved Delaney and Bonnie Bramlett, Leon Russell, , and various others. The song's working title during portions of its development was "Groupie Song".

In its first recorded incarnation, the song was called "Groupie (Superstar)", and was recorded and released as a to the Delaney & Bonnie single "Comin' Home" in December 1969. Released by , the full credit on the single was to Delaney & Bonnie and Friends Featuring Eric Clapton.

Sung by Bonnie, the arrangement featured slow and bass parts building up to an almost gospelish chorus using horns.

The song was about, as the title suggests, a who holds a strong love for a rock star after a short sexual involvement. He has moved on to the next town, and despite his promises to see her again she can now only hear him on the radio. She is just left with the pure hopeless yearning of the chorus:

Delaney & Bonnie were not yet well known at the time, and "Comin' Home" only reached number 84 on the U.S. pop singles chart, although it achieved a peak of sixteen on the .

During the first half of 1970, 's legendary Mad Dogs and Englishmen revue toured in the United States. Ex-Delaney and Bonnie vocalist was a on this tour, and song co-writer was the bandleader. Some accounts have Coolidge suggesting or inspiring the song's creation in the first place, and working with Bonnie Bramlett on her portion of the writing. In any case, Coolidge was given a featured vocal on the song during the tour; she took the verses with an air of resignation but the choruses with more anguish. The arrangement was fueled by Russell's evocative line laced with dynamic fills, with understated horns, , and behind it.

In August 1970, the live album "Mad Dogs and Englishmen" was released, using performances recorded in March and June of that year. The song, now under the name "Superstar", appeared on it. The album became a huge hit, reaching number 2 on the Billboard pop albums chart and number 23 on the Billboard Black Albums chart. So it was on this album that people started becoming aware of the song. The performance helped vault Coolidge to greater visibility, especially when it was also included in the 1971 "Mad Dogs and Englishmen" film of the revue.

The unknown but very lively singer began making regular appearances on "" in August 1970. During one such appearance, she sang "Superstar".

Later, once The Carpenters' version had become a hit, she sang it again on "The Tonight Show" in October 1971. Her recording of it then appeared on her 1972 debut album "The Divine Miss M".

Around September 1970, recorded "Superstar" as her last single for . Released in October or November 1970, and in the gap between 's heyday and the start of Cher's solo successes, it did not chart. After the song became better known, a concert performance of it was included in the 1973 "".

Next up was Australian singer 's recording of "Superstar", which was released by May 1971 and became a moderate hit in . 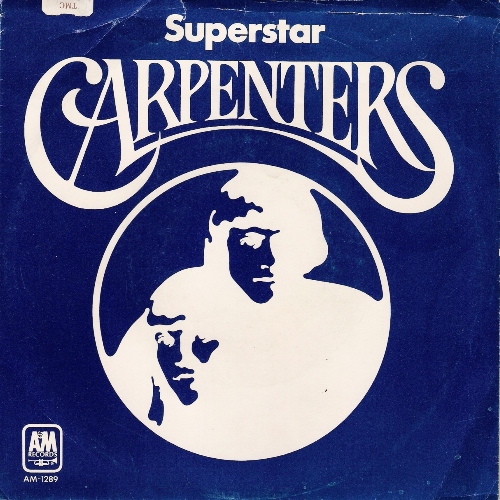 "Superstar" became its biggest hit version for the Carpenters. Richard Carpenter was unaware of the Bramlett or Mad Dogs originals, but as he later wrote in a compilation album's liner notes: "I came home from the studio one night and heard a then relatively unknown Bette Midler performing this song on the "Tonight Show". I could barely wait to arrange and record it. (It remains one of my favorites)."

Carpenter's arrangement featured an line at the start, followed by Karen Carpenter's clear voice set against a quiet in the verses, which then built up to up-tempo choruses with a quasi-orchestral use of horns and strings. Produced by Richard with Jack Daugherty, it was recorded with members of the famed s The Wrecking Crew. It is said that Karen Carpenter recorded her vocal in just one take, using lyrics scribbled on a napkin. Since the song's subject was more risqué than usual for the clean-cut image of the Carpenters, Richard changed a lyric in the second verse [cite news |first=Johnny |last=Black |authorlink= |coauthors= |title=The Greatest Songs Ever! Superstar
url=http://www.blender.com/guide/articles.aspx?id=826 |work=Blender |publisher= |date=October 2002 |accessdate=2008-02-19] from:

:"And I can hardly wait:"To sleep with you again

To the somewhat less suggestive:

:"And I can hardly wait:"To be with you again.

The duo's rendition was included on the May 1971 album "Carpenters", and then released as a single in September 1971. It rose to number 2 on the pop singles chart that autumn and earned status. It also reached number 18 on the UK pop singles chart and did well in Australia and as well.

Richard Carpenter would be nominated for a Grammy Award for Best Arrangement Accompanying Vocalist for his efforts. "Superstar" would go on to appear on two mid-1970s Carpenters live albums as well as innumerable compilation albums.

In the 1995 comedy film "", 's character and 's character argue over what music to listen to on the radio (Farley prefers heavy metal; Spade prefers more modern rock) when they stumble upon this song. Both insist that the other should turn to another station if the song offends them; in the next scene both of them are loudly singing the song's chorus. The song was also used in the 2007 movie, "", with as the Ghost Rider. In the movie, tries to turn off "Superstar", when Cage defends the song and states that nobody messes with Karen Carpenter. On the "Ghost Rider" official soundtrack, a song is entitled "A Thing for Karen Carpenter."

The original Delaney and Bonnie version would finally surface on an album in 1972 when "" and "The Best of Delaney & Bonnie" were released, around the time that their marriage and collaboration ended. It also was included as a bonus track on a 2006 reissue of the 1970 album "Eric Clapton".

Bonnie Bramlett would later re-record the song on her 2002 solo album "I'm Still the Same". Now using just the "Superstar" title, she did it as a very slow, -based .

In the early 1980s American R&B singer had "Superstar" in his stage act, sometimes in a rendition that stretched out at nearly six minutes, with vocal interpolations, an , and plenty of swaying and swooning females in the audience.

This was the first prominent version by a male singer, and by now the original "groupie" association was far gone. Instead, the song was presented as a tale of universal longing.

Second-season "" contestant found his tic, R&B groove early in the Final 12 rounds when he performed a Vandross-influenced "Superstar". It got rave reviews from the judges and established Studdard as one of the early leaders in the competition, a position he held until winning the title in May 2003 in a close battle against .

By now his , Studdard recorded "Superstar" as the B-side of his June 2003 first single and number two hit, "". Studdard would earn a nomination for for "Superstar", but lose out to his idol Vandross. Studdard's treatment was also included on his December 2003 debut album "Soulful".

In addition to those mentioned earlier, "Superstar" has been recorded by:

* (a group consisting of 's wife and sister-in-law) on their "Spring" album in 1972.
*English singer , on her million-selling 1981 album "Pearls"; it then became a staple of her live sets and a strong fan favorite.
*, who always found unlikely inspiration from the Carpenters, [cite news | url=http://www.toledoblade.com/apps/pbcs.dll/article?AID=/20070812/ART10/70811056 | title=Sonic Youth broke new ground with ‘Daydream Nation’ | author=Christopher Borrelli | publisher="The Blade" | date=2007-08-12 | accessdate=2008-02-27] on the 1994 tribute album "If I Were a Carpenter", and later on the soundtrack for the 2007 film "Juno". It was also featured in the film "" and in the theatrical trailer for "High Tension". It also appeared in professioal skateboarder Jerry Hsu's part in , the critically acclaimed skateboarding video by which won Transworld awards for both best video and best video part (Hsu's).
*English trance singer in the early 2000s.
*Dogstar, a rock band best known for their bass guitarist, actor , covered the song on their 2000 album "Happy Ending".
*On the soundrack of the movie , a band called Superfan is covering Superstar. Superfan is a collective including (from ) on vocals and the musicians from .
*Punk cover specialists , on 2004's ""; the original lyrics were set to the main riff from ' "Kids of the Black Hole".
*Usher's homage to the now-late Vandross' version, on the 2005 "" album, for which he received a Grammy nomination for Best Male R&B Vocal Performance.
*various other contestants on "American Idol" and other 2000s singing contest shows such as "", "", and "The X Factor"; the song's licensing is clearly favorable, and the chance for singers to emote on the chorus seems irresistible.
* performed the song with (as ) on the , broadcast of "".

Because the song's title does not appear in its lyric, people sometimes do not associate the two, and get confused. The song's first line, "Long ago and oh so far away", lends itself to a mixup with two other songs of the same era, 's "Long Ago and Far Away" (from his 1971 album "") and 's "So Far Away" (from her 1971 album "Tapestry"). In the opposite direction, the title is sometimes confused with "Superstar", an unrelated song from the late 1970 rock opera "Jesus Christ Superstar".