The Port of Bridgetown (officially the Deep Water Harbour),[3] (AMS Seaport Code: 27201,[4][5] UN/LOCODE: BB BGI, Port Callsign: 8PB) is a seaport in Bridgetown on the southwest coast of Barbados. Situated along Carlisle Bay, the harbour handles all of the country's international bulk ship-based trade and commerce.[6] In addition to international-shipping the Deep Water Harbour is the port of entry for southern-Caribbean cruise ships.[7] The port is one of three (3) designated ports of entry in Barbados; it along with the privately owned Port Saint Charles marina are the two designated ports of entry for persons arriving by sea. While the Sir Grantley Adams International Airport is the designated port of entry for persons arriving and departing by air. The port's timezone is GMT –4, and it handles roughly 700,000[8] cruise passengers and 900,000 tonnes of containerised cargo per year.

Construction of the Deep Water Harbour began in 1956 by Costain Group of Britain,[9] and cost EC$28,000,000 through completion in 1961. The port was formed by creating a man-made isthmus across the shallow strait that existed off the coast of Fontabelle, St. Michael. The isthmus formed 90 acres of new land stretching from the original west coast of Barbados, out to a small uninhabited island nearby named Pelican Island. After the initial completion, the harbour later underwent a $22 million expansion seventeen years later.[3]

In 2002 Barbados Port Inc. contracted with Jan De Nul Group of Companies of Belgium to carry out dredging at the port facility. The dredging was deemed necessary to allow some of the world's largest cruise ships to berth in Barbados rather than anchoring offshore. The project followed a rigorous environmental monitoring programme by the Barbados Port Inc. along with key regulatory agencies, namely the Town Planning Department, the Coastal Zone Management Unit, the Environmental Engineering Division and the University of the West Indies' Natural Resources Management Programme to ensure that the oceanographic and sediment processes, the water quality, and the marine communities were not compromised in any way.[10] During this operation, the port's depth was increased to 11.6 metres (from 9.6 metres). Reclaimed material from the dredging was added to increase the port's cargo area by 9 acres.[11]

In December 2008, Minister of International Transport George Hutson announced that due to congestion between cargo and passenger ships at the Deep Water Harbour, the country needed to look at expansion at the facility following the last upgrade undertaken in 2002.[12] Due to the importance of Tourism to Barbados' economy, the government is presently reviewing a further $70 million dollar upgrade.[13]

In September 2010, the Barbados government stated it was reviewing a list of joint-venture partners to construct the new cruise ship facilities at the port with expected construction to begin in 2011.[14]

Due to increased activity at the port, officials say it poised to become a "super-hub of the southern Caribbean", rivalling Puerto Rico.[15][16][17] 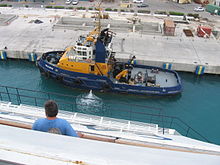 The Deep-Water Harbour now acts as a home port for many of the British-based Cruise ship lines operating in the Caribbean region. Some of the Cruise Lines which visit or are home ported at the Deep Water Harbour include:[28]