Department 56 is a manufacturer of holiday collectibles, ornaments and giftware, known for their lit Christmas village collections and their Snowbabies collection. It is owned by Enesco.

Department 56 was founded in 1976. In 1993, the company was listed on the New York Stock Exchange under the symbol of "DFS". In 2005, after purchasing Lenox from Brown-Forman, the company changed their name to Lenox Group Inc and their ticker symbol to "LNX". After failing to meet the exchange's requirements, trading was moved to the OTC Bulletin Board under the ticker "LENX". Lenox filed for bankruptcy in 2009, and was acquired by the private equity firm Clarion Capital Partners. Enesco acquired Department 56 from Lenox that year.

Department 56 is a company that manufactures gift items, notably lit porcelain houses stocked in many stores, especially during the Christmas season. These items are collectible.

The brand began with the "Snow Village" collection of six houses in 1976. Each house is named and dated on the bottom. The date is the date of copyright, not the date of issue. The Original Snow Village began with the Mountain Lodge, Gabled Cottage and the Inn and are made of ceramic. The collection consists of over 225 pieces, including accessories. 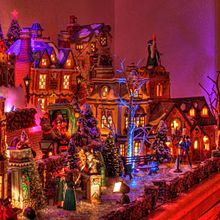 The "Heritage Village" Collection actually consists of several different villages and then some sub-collections within each village. It all started with the porcelain Dickens Village in 1984 of quaint houses depicting the time of Charles Dickens and relates to the stories that he wrote. It has such pieces as The Cottage of Bob Cratchit & Tiny Tim, The Old Curiosity Shop, Nicholas Nickleby, David Copperfield and Oliver Twist.

The "New England Village" started in 1986 and depicts the buildings and people of the New England area with its many churches, such as the Old North Church in Boston, lighthouses and the farm areas.

The "Alpine Village" also started in 1986 and is still pretty small with few buildings in the collection. Only two are now retired. It consists of buildings such as Josef Engel Farmhouse, Bessor Bierkeller, Grist Mill and the St. Nicholas Kirche Church.

The "Christmas in the City" collection started in 1987 and is set in the 30's and 40's and consists of such pieces as the Palace Theatre, Toy Shop & Pet Store, Ritz Hotel, Dorothy's Dress Shop, Wongs, and a rare limited edition - St. Mark's Church.

The "North Pole Series" was started in 1990 with the introduction of three houses, Santa's Workshop, Elf Bunkhouse, and Reindeer Barn. The collection celebrated its 15th Anniversary in 2005 with the release of five special edition buildings which put together spelled SANTA.

The "Little Town of Bethlehem" was issued in 1987 and is a set of twelve pieces.

Each Village consists of numerous houses and shops along with a number of accessory pieces for each of the villages. Each year new buildings and accessories are introduced. Retirement of different pieces as well as the breaking of their molds each year may increase their value to collectors.

All products are imported, and are not one of a kind.