Do You Believe? Tour

The Do You Believe? Tour, sometimes also known as The Believe Tour, was Cher’s third solo concert tour. The tour which took place in 1999 and 2000, was used to promote her album Believe.

The August 28, 1999 performance at the MGM Grand Garden Arena was made into the Emmy Awards-nominated HBO television special Live in Concert, which aired the following day, and by year's end was released on VHS and DVD.

Cyndi Lauper, Michael McDonald, and Julio Iglesias Jr. were the opening acts at different times during the tour.

The tour was very successful commercially, and in early December 1999 an announcement was made that 20 extra dates were being added in North America.[1]

At the time it was her highest-grossing tour ever, although it would later be eclipsed by her marathon 2002-2005 Living Proof: The Farewell Tour.[citation needed]

As might be expected, Cher appeared in a variety of costumes during the performance. Her opening outfit, a spectacularly hideous affair involving a stringed skirt, meshed top over a cross, and a huge red wig, was dubbed self-depricatingly by her as the "Bozo the Clown-meets-Braveheart look" or the 'Super Groundforce Girl' referring to Charlie Dimmock from the popular-at-the-time Groundforce Gardening show.[2] All in all there were 7 to 9 different ensembles, depending upon how one does the counting, with none lasting more than a handful of songs.

Reviews of the show were often favorable, given Cher's return to popularity and over-the-top appeal. The New York Times said Cher had "a quintessential rock voice ... spectacularly styled with a rough and tumble vaudevillian edge." The Washington Post viewed it as "a dynamic, over-the-top extravaganza." The Dallas Morning News said "her concert was entertaining and gleefully glitzy." [1] 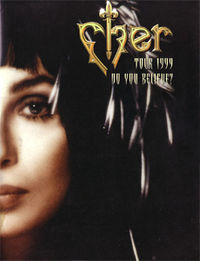