The Other Side (Aerosmith song)

The Other Side (Aerosmith song)

Infobox Single
Name = The Other Side 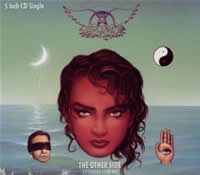 Peaking at #22 on the , the song marked a first for Aerosmith, as it became the fourth song from a single album of theirs to chart in the of the . Only "" has equaled this feat.

Additionally, the song reached #1 on the chart, the third single from "" to do so.

On the album, a 0:49 second instrumental called "Dulcimer Stomp" acts as an interlude before the song begins. This is often cut out on radio, but not always.

The song features a notable horn section, as well as a memorable chorus line repeated several times throughout the song ("Lovin' you has got to be like the devil in the deep blue sea" and the background refrain of "Take me to the other side"). A very bluesy guitar and piano solo also highlights the middle of the song.

Motown songwriting team claimed the main riff in the song highly resembled one of their works, the ' 1966 hit "". and threatened legal action. Aerosmith's management worked out a deal in which their names would be added to the songwriting credit to avert a lawsuit.