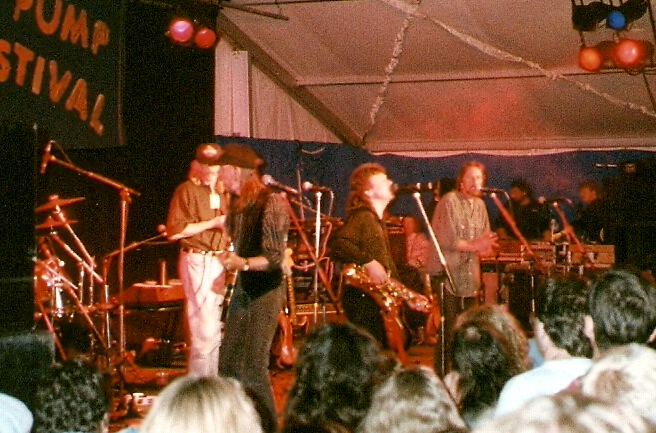 Lindisfarne were a British folk/rock group of the 1970s, fronted by singer/songwriter . Their music combined a strong sense of yearning, often for home, with an even stronger sense of fun. Hit singles included "Meet Me On The Corner", "Lady Eleanor", "Run For Home", and the anthemic "We Can Swing Together", though perhaps their best-remembered song is "Fog On The Tyne" from the LP of the same name.

The group began as the Downtown Faction, but soon changed their name to Brethren. In 1968, after hearing of an American group of the same name, they were rechristened Lindisfarne after the island of that name off the n coast.

In 1970 signed them to and their debut album "" (so named because the group claimed they were 'nicely out of tune' with other prevailing musical trends at the time) was released, defining their mixture of bright harmony and rollicking folk rock. Both singles released from the album, "Clear White Light" and "Lady Eleanor", failed to chart, as did the album itself at first. Nonetheless, the band obtained a strong following from its popular live concerts.

Their second album, the -produced "", followed in 1971 and began their commercial success, charting late in 1971 and reaching No. 1 the following year. Their profile was also raised when Jackson played mandolin on 's breakthrough hit single "", even though Stewart only credited him on the sleeve of the parent album "Every Picture Tells a Story" as "the mandolin player in Lindisfarne... the name slips my memory". For years the legend persisted that disc jockey had played the mandolin part, solely as he was invited to mime it on .

Top 10 singles "Meet me on the Corner", written by Clements, and a re-release of "Lady Eleanor", followed in 1972, and "Nicely Out Of Tune" belatedly made the Top 10. The band obtained a huge media following, with some calling Hull the greatest songwriter since , and the band was even referred to as the "1970s ". By the summer of 1972 they were one of the biggest names in British rock music, stealing the show at festivals and selling out live dates wherever they played.

At the pinnacle of their success, they recorded their third album, "Dingly Dell", which featured strings arranged by Laidlaw's brother Paul on several tracks. They were unhappy with the initial production, and remixed it themselves. It was released in September 1972 in a plain beige cardboard sleeve, to demonstrate to fans that it was the music which mattered. Some overseas markets insisted on redesigning it with a photo of the band instead, the design which has since been used for the CD reissue. Though it entered the Top 10 in the first week of release, it received lukewarm reviews; the ecologically-themed single "All Fall Down" was a Top 40 hit, but the second single, '"Court in the Act", failed completely.

Internal tensions came to the fore during a disappointing tour of in early 1973. Hull initially considered leaving the band, but was persuaded to reconsider. It was agreed that he and Jackson, the two joint lead vocalists, would keep the group name while Cowe, Clements, and Laidlaw left to form their own outfit, . They were replaced by Tommy Duffy (bass guitar), Kenny Craddock (born Kenneth Craddock, , in , ) (keyboards), Charlie Harcourt (guitar), and Paul Nicholl (drums). As an interesting aside, Jackson almost persuaded of Genesis to join the Mark II line-up after Laidlaw reversed his decision to continue.

The new lineup lacked the appeal of the original, and with Hull also pursuing a solo career, the band's next two albums, "Roll On Ruby" and "Happy Daze", plus the tracks released as singles, failed to chart. They disbanded in 1975, but the old line-up continued to play annual Christmas shows at Newcastle.

In 1977 they reformed, and with a new record deal with Records via their label, they were back in the charts in 1978 with the top 10 hit "Run For Home", an autobiographical song about the rigours of touring and relief at returning home. It gave them a Top 40 hit in the US at last, and the album "Back and Fourth" made the British Top 30. Subsequent singles "Juke Box Gypsy" and "Warm Feeling" failed to sustain their newfound success, and after the failure of "The News", their second Mercury album in 1979, they were dropped by the label.

In the 80s, throughout various lineup changes, they continued to release albums, with only their nostalgic live recordings achieving any real attention, recording singles like "I Must Stop Going To Parties" on their own Lindisfarne Musical Productions label in the mid 80s, with the catalogue numbers FOG1 to FOG4, as well as one album, "Sleepless Nights". In 1984 they supported and Santana at , home of their beloved . Saxophone player and vocalist Marty Craggs joined the group shortly afterwards. Throughout the 80s and early 90s they played annual Christmas tours. "C'mon Everybody" was a double vinyl LP consisting largely of old rock'n'roll standards, such as the title track, "Party Doll", and "Twist and Shout". Some diehard fans were horrified that their heroes should be seen to be "selling out" by recording a party album, though others thought the bad press was thoroughly undeserved.

In 1990 they introduced themselves to a new generation when a duet of "Fog on the Tyne Revisited" with footballer rose to No. 2 in the UK singles chart (again accompanied by cries of "sell out"). Soon afterwards Jackson left the band after a dispute with Hull, chiefly related to Hull's view that Jackson was not sufficiently interested in being a member any more. Cowe left amicably in 1993, to run a brewery in Canada.

After Hull's death on , , the band continued to play in many incarnations, until they felt they had run their course. They sensed that interest was diminishing, and each member wanted to pursue separate projects. Their last show was played on , to the packed Newcastle Opera House. Playing together for the last time as Lindisfarne were Dave Hull-Denholm, Billy Mitchell, Rod Clements, Ian Thomson and Ray Laidlaw. The final concert was recorded for posterity and released under the appropriately named "Time Gentlemen Please". Clements, who had taken over as the band's principal songwriter after Hull's death, has continued to release solo albums and play gigs in England, accompanied by his new outfit The Ghosts of Electricity.

On , , the friends and colleagues of Alan Hull played a memorial concert to a packed house at to perform his words and music, pay tribute to his talent, and celebrate his life. These artists included Alan Clark, , , Steve Cunningham, , , , , , , , Ray Jackson, , , , Billy Mitchell, , , , , , , , and . Proceeds from the concert were donated to The North East Young Musicians Fund.