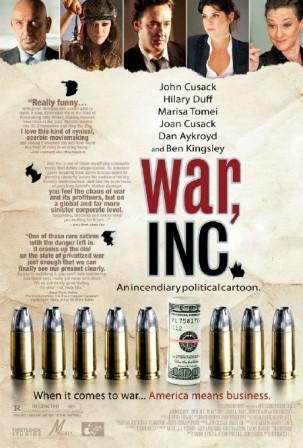 "War, Inc." is thought to be a or to the 1997 film "". Both films are black comedies with similar styles and themes, and both films star John Cusack as an assassin and Joan Cusack as his assistant, with in a supporting role. In an interview, Joan Cusack said, "I think, in a way, ["War, Inc."] was a "Grosse Point Blank 2"." [Jen Yamato, [http://www.rottentomatoes.com/m/war_inc/news/1730094/rt_interview_joan_cusack_on_war_inc_the_unofficial_sequel_to_grosse_point_blank "RT Interview: Joan Cusack on War, Inc., the Unofficial Sequel to Grosse Point Blank"] , Rotten Tomatoes, May 22, 2008.]

"War Inc." is set in the future, when the fictional desert country of Turaqistan is torn by a riot after a private corporation, Tamerlane (based on ), owned by the former (, based on ), has taken over the whole country. Brand Hauser (), a hit man who suppresses his emotions by gobbling down hot sauce, is hired by the corporation's head to kill the CEO of their competitors. To do this, he has to have a cover-up which is in the form of a gala wedding by the outrageous Central Asian Superstar Yonica Babyyeah (). Everything changes when the ruthless killer finds himself head-over-heels in love with a sexy reporter Natalie Hegalhuzen ().

"War, Inc." received generally negative reviews from critics. As of , 2008, the review aggregator reported that 30% of critics gave the film positive reviews, based on 34 reviews &mdash; with the consensus that the film "attempts to satirize the , but more often than not it misses its target." [cite web|url=http://www.rottentomatoes.com/m/war_inc/ |title=War, Inc. Movie Reviews, Pictures - Rotten Tomatoes |accessdate=2008-05-24 |publisher=] reported the film had an average score of 37 out of 100, based on 21 reviews. [cite web|url=http://www.metacritic.com/film/titles/warinc |title=War, Inc. (2008): Reviews |accessdate=2008-05-24 |publisher=]

"War, Inc." opened on an extremely in only two theatres across the on , . It grossed an estimated $36,600 in those two theaters during its opening weekend. [cite web|url=http://www.boxofficemojo.com/movies/?page=weekend&id=warinc.htm |title=War, Inc. (2008) - Weekend Box Office Results |accessdate=2008-05-26 |publisher=] It was second in largest per theater gross behind "". The film closed on , after not seeing a wide release, grossing only $580,862 domestically in less than thirty theatres across the and . It was then released in theatres on , in , , in , , in Portugal.

(Yonica Babyyeah) was the only cast member to do promotion for the film. This included interviews on "", "", "Today", "" and "" through-out . All of the cast attended the premiere at the bar .