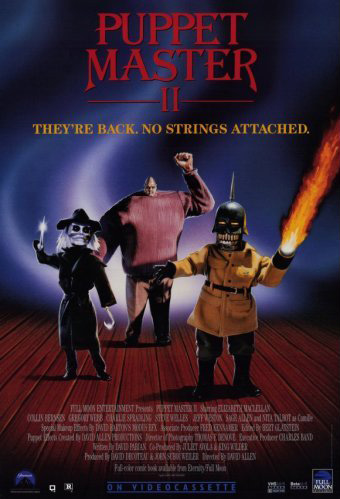 A group of s, led by Carolyn Bramwell, are sent to the hotel to investigate the strange murder of Megan Gallagher and the lunatic ravings of a now insane Prof. Alex Whitaker At the graveyard behind the hotel, the five puppets bring their original master back to life. While investigating, Patrick finds the opened grave and takes pictures of it. Camille is brought to the hotel but decides to leave due to an encounter with "two little demons."

At night, when Camille is packing up, her light dies out and a statue of a head in the room lights up. As she steps towards the head, Pinhead trips her, breaking her ankles. It is interesting that when Jester uses the formula in Camille you can see the hand of the puppeteer guiding the puppet. Jester walks up and ties a sock around her mouth and then Pinhead drags her away by the hand. Due to Camille's vanishing, the researchers become worried.

The next night, Patrick gets drunk and decides to go to bed. Lance and Wanda are up late watching monitors when they see Tunneler look around, then run into Patrick's room. Tunneler stands on Patrick's bed and gets a running start into his face. Lance runs in, but is too late to save Patrick. He throws Tunneler against the wall and hits him with a lamp. Later, Tunneler has been dissected in a pan. Up in the puppet master's room, Andre is building a mechanical arm and a metal helmet. In the day, the puppet master makes his existence noticed by revealing himself to the researchers cloaked in a strange looking masked outfit.

At night, in the redneck neighbor's cabin, the wife cannot sleep due to her husband's tossing and turning. When she finally looks at him Leech Woman is knifing out part of the husband's brain. She jumps to her feet and Leech Woman jumps off the bed. The wife grabs a rifle and looks for her. As she walks Blade jumps out and cuts her leg. The rifle slides under the couch. Leech Woman pushes an old doll off the mantle and it breaks. The wife grabs a frying pan, but puts it down to pick up the broken doll. When she looks up, Leech Woman jumps out at her but the wife smacks her down and throws her in the fireplace. Leech Woman dies and the wife grins. She sees Blade and walks toward him. She picks up the rifle, but her attention is turned to a new puppet walking in. The new puppet is Torch, who makes his debut in this movie. She points the gun at him but he reacts quickly and lights her on fire with his flame thrower.

In the puppet master's room, Pinhead is sitting on the wooden table, while Jester is sad, and slouched in his little throne. Andre remembers his time in Egypt, how he got the formula from a strange man with a little green goblin puppet chained to a cage. Blade and Torch return, but Andre is not pleased with the fried brains from the wife. He throws it out remarking that "we need fresh brains for the formula." The four remaining puppets walk back into the cabinet.

The next day, Carolyn talks with Andre and thinks he's creepy. Camille's son, Michael comes to the hotel and grows fond of Carolyn. In Andre's room he tells Torch to kill outsiders, and tells the rest of the puppets to get more brains. Not too far from the hotel, an RV is parked with a little boy running around outside. The kid whips an action figure but on the third hit, the whip wraps around it and flings it into a bush. The figure gets flung back at the boy by something. When the kid begins to yell, Torch steps out of the bush. The boy kicks his action figure to the side and runs toward him. He picks Torch up and examines him. The boy yells at Torch saying, "Do something!" The kid whips Torch and scolds him. Torch lifts up his flame thrower and lights the boy on fire.

At the hotel, Lance and Wanda are in their room. Wanda leaves to check the monitors but hears gagging in her room. She enters, and turns on the light to see Blade slitting Lance's throat and carving up his brains. Blade jumps off the bed and attacks Wanda. We cut to Andre's room to see brains being poured into a tin dish. Jester walks in with a cup of more brains. The puppets mix in the new brains and are all more active than ever. Andre tells the puppets to kill Michael but not Carolyn. When Michael gets out of bed Torch is waiting at the door. He jumps behind the bed as it lights up in flames. Michael spies on Torch from behind a wall and sprays him with a fire extinguisher and then throws it at him. As he's running, Pinhead swings down from a light and punches him. Pinhead begins strangling him but Michael throws him against a wall. Blade jumps out, but Michael drops him down a dumbwaiter shaft. In the same dumbwaiter, Camille's dead body can be seen with Jester walking in her.

Carolyn is kidnapped by Andre and he shows her life size puppets for him and her to live in. He puts himself into one of them and the puppets get angry realizing that he is not using the formula for them, but for him and Carolyn. Michael runs in and Andre threatens to kill her if he comes close. Now only one cup of formula remains. Andre looks over to see Jester grab the last cup and run away with it. Andre walks towards him but Pinhead trips him and pulls him back. Blade hooks his leg and rips a hole in his new fragile body. Michael and Carolyn run away and leave the hotel. Torch, covered in foam walks in on Andre's torture. Pinhead picks up a metal cane and smashes Andre's hand with it. Torch lights him on fire and Andre crashes out the window. Jester takes the formula to Camille's body. Later we can see a red van driving around. In the van is the life-size woman puppet. She talks in Camille's voice. Next to her is Torch, and in the back seats are cages which the puppets are in. The woman recommends going to the children's mental institute, and drives off.

This film as well as sequels three through five were only available on through a box set that is now discontinued but still available at their website as well as from them at Amazon.com. It included all the first seven chapters of the franchise and a bonus disc with 45 movie trailers. Other than the first three films which have been released separately as a Spanish region free DVD, the films have not yet been released individually.