The names Alice and Bob are commonly used placeholder names for archetypal characters in fields such as cryptography and physics. The names are used for convenience; for example, "Alice sends a message to Bob encrypted with his public key" is easier to follow than "Party A sends a message to Party B encrypted by Party B's public key." Following the alphabet, the specific names have evolved into common parlance within these fields—helping technical topics to be explained in a more understandable fashion.

In cryptography and computer security, there are a number of widely used names for the participants in discussions and presentations about various protocols. The names are conventional, somewhat self-suggestive, sometimes humorous, and effectively act as metasyntactic variables.

In typical implementations of these protocols, it is understood that the actions attributed to characters such as Alice or Bob need not always be carried out by human parties directly, but also by a trusted automated agent (such as a computer program) on their behalf. Despite the advantage of Alice and Bob's distinct genders in reducing ambiguity, there has been little tendency to introduce inanimate parties so they could be referred by neuter pronouns. 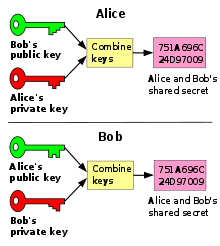 An example of an "Alice and Bob" analogy used in cryptography.

This list is drawn mostly from the book Applied Cryptography by Bruce Schneier. Alice and Bob are archetypes in cryptography; Eve is also common. Names further down the alphabet are less common.

Although an interactive proof system is not quite a cryptographic protocol, it is sufficiently related to mention the cast of characters its literature features:

A similar pair of characters is Paul and Carole. The characters were introduced in the solution of the Twenty Questions problem,[2] where "Paul", who asked questions, stood for Paul Erdős and "Carole", who answered them, was an anagram of "oracle". They were further used in certain combinatorial games in the roles of Pusher and Chooser respectively, and have since been used in various roles.[3]