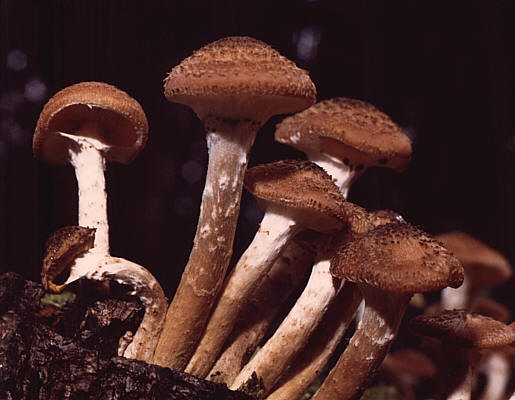 "Armillaria ostoyae" is a commonly known as a , and sometimes called Shoestring Rot.

This is the most common variant in the western U.S., of the group of that all used to share the name "Armillaria mellea". "Armillaria ostoyae" is quite common on both hardwood and wood in forests west of the Cascade crest. The attacks the sapwood and is able to travel great distances under the bark or between trees in the form of black rhizomorphs ("shoestrings").

The disease is of particular interest to forest managers, as the species is highly pathogenic to a number of commercial softwoods, notably ("Pseudotsuga menziesii"), true s ("Abies spp.") and ("Tsuga heterophylla"). A commonly prescribed treatment is the clearcutting of an infected stand followed by planting with more resistant species such as ("thuja plicata") or deciduous seedlings. The removal of stumps (stumping) has been used to prevent contact between infected stumps and newer growth resulting in lower infection rates. However, it is unknown if the lower infection rates will persist as roots of young trees extend closer to the original inoculum from the preceding stand. The use of another fungus, "" has been shown in early experiments to competitively exclude "Armillaria ostoyae" in both field and laboratory conditions, but further experimentation is required to establish the efficacy of this treatment.

A mushroom of this type in the in the of eastern , U.S. was found to be the largest fungal colony in the world, spanning 8.9 km² (2,200 acres) of area. This organism is estimated to be 2,400 years old. The fungus was written about in the April 2003 issue of the "Canadian Journal of Forest Research". While an accurate estimate has not been made, the total of the colony may be as much as 605 s. If this colony is considered a single , then it is the largest known organism in the world by area, and rivals the aspen grove "Pando" as the known organism with the highest living biomass.

In 1992, a relative of the Strawberry Mountains clone was discovered in southwest state. It covers about 6 km² (1500 acres).

Another "humongous fungus" is a specimen of "" found at a site near Crystal Falls, covers 0.15 km² (37 acres), and was published in "Nature".