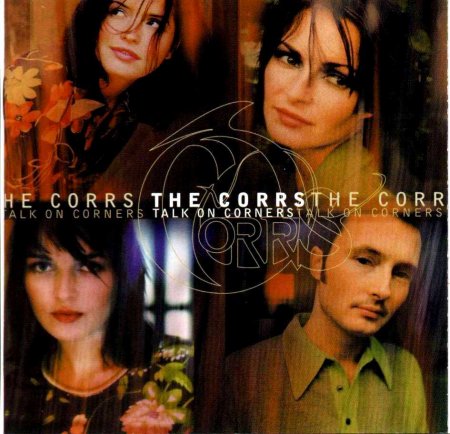 "Talk on Corners" is the second album by Irish band , released in 1997. The name of the album is derived from a line from the albums' song "Queen of Hollywood".

:"And her friends they" "talk on corners", "they could never comprehend"

After its release, songs from this album were to dominate their live set for a long time to come and through the biggest growth period of the band's career. During this album's long reign, they worked solidly with very little time off and gained a lot of exposure with TV appearances and tours. Their next studio album took nearly 3 years to materialise. In between was a live 'unplugged' album which introduced only a handful of new songs. Hence their continuing reliance on existing material, some of which became subject to rearranging or remixing along the way.

"Talk on Corners" was The Corrs' breakthrough album in the , but not initially. The first 3 single releases from the album ('', '' and 'What Can I Do') all failed to reach the top 40. Meanwhile they had contributed to the album "Legacy: A Tribute To Fleetwood Mac's Rumours" with their version of the song 'Dreams'. They had incorporated the song into their live set and eventually decided to release it as a single. Its release followed a live concert at the Albert Hall on 17 March 1998 (St Patrick's Day), televised by the , coupled with a day-long TV special devoted to The Corrs on VH-1 as a preamble to the event. In concert, they were joined by drummer (who was also producer of the "Legacy" album) on 3 songs, including 'Dreams'. The event did much to raise the band's profile. The single 'Dreams' was released a few weeks later and the "Talk on Corners" album was reissued with the track 'Dreams' added. A remixed version of the single became their first UK top 10 hit, partly helped by Radio One's decision to include a Corrs single on their for the first time (they had previously regarded them as a folk band).

The album took off and more hit singles followed. The next was a new version of their previous single 'What Can I Do', remixed by and radically transformed by the addition of a prominent guitar riff running through the whole of each verse. This gave them their next top 10 hit. In November, they put out a further ed track from the album as another single - 'So Young' - which also made the top 10. A 'Special Edition' version of the album was released, with a modified running order and featuring these remixes. The album also included an additional track, a remix (courtesy of again) of 'Runaway', a popular song from their first album, which was to become their next single and giving them a number 2 hit.

"Talk on Corners" became the UK's #1 selling album in 1998Fact|date=February 2007 and eventually went on to sell 2.7 million, making it one of the best selling albums of all time (in the UK). It also tops charts in at least another 17 countries. Coincidentally it is only marginally behind 's , the album that provided their breakthrough hit song in the UK.

In January 1997 they moved to California to begin working on this album, largely under the supervision of . On the face of it, this was almost a repeat of what they had done 2 years earlier when they began recording their debut album "". However, this time they were under far more pressure to deliver. Andrea has described the making of this album as being 'a struggle'. In the video documentary "Home" manager John Hughes cited '' as common source of pressure for all artists. Unlike their previous recording experience, the aim of which had been to capture the band's sound and vibe on record using already existing and established material, the new goal was to create and record new songs, as yet mostly unwritten, and to try to equal or surpass their earlier efforts.

Further demands came from the record company, who were concerned that none of the songs they were being presented with seemed like potential hit singles. They disliked the songs 'What Can I Do' and 'So Young', particularly the latter, and the band had to fight hard for their inclusion on the album. With hindsight, the company's attitude seems incongruous, as these 2 tracks eventually did very well as single releases, but it needs to be remembered that they were recorded at a time when ' brand of pop music had not yet caught on with the public.

Various co-writers and additional producers were brought in to help improve the hit potential, eg , , and Oliver Leiber. The use of different producers on different tracks introduced further difficulties. They found that this made it hard to achieve consistency throughout the whole album. In the end, however, the band were reasonably pleased with the finished product. However the record company were rather less happy with it and wanted the band to continue recording more new tracks. When refused, Atlantic threatened not to release the album at all and manager John Hughes was forced to make guarantees about future album sales in order to gain their cooperation.

These bonus tracks also appeared as b-sides of the singles "Only When I Sleep" and "" respectively.

*With the addition of the track "Dreams", this release became established as the 'main' version.

Released after the huge success of Talk On Corners in Europe and Australasia, this album was also one of The Corrs' attempts to break into the US charts. This revised album contained remixes of a few tracks including their first single "Runaway". Other songs featured included "Dreams", "What Can I Do" and "So Young".

The songs on this album were remixed by:
* - "What Can I Do" and "Runaway"
*K-Klass - "So Young"
*Bob Chiarelli - Dreams"The song "I Never Loved You Anyway" was also remixed but the name of the remix was never mentioned (although it was believed to be Tin Tin Out).

"Make You Mine" was supposed to replace "Intimacy" on this album but the idea was snubbed. It was later featured on "", released in 2001.