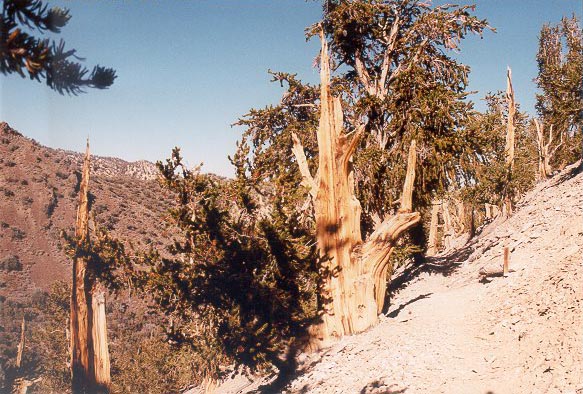 The Great Basin Bristlecone Pine ("Pinus longaeva") is one of the s, a group of three species of found in the higher s of the southwest . Great Basin Bristlecone Pine occurs in , and eastern . In California, it is restricted to the White Mountains, the , and the , in Mono and Inyo counties. In Nevada, it is found in most of the higher ranges of the from the near Las Vegas north to the , and in Utah, northeast to South Tent in the .

It is a medium-size , reaching 5-15 m tall and with a trunk diameter of up to 2.5 m, exceptionally 3.6 m in diameter. The bark is bright orange-yellow, thin and scaly at the base of the trunk. The leaves ('needles') are in fascicles of five, stout, 2.5-4 cm long, deep green to blue-green on the outer face, with confined to a bright white band on the inner surfaces. The leaves show the longest persistence of any plant, with some remaining green for 45 years (Ewers & Schmid 1981).

The cones are ovoid-cylindrical, 5-10 cm long and 3-4 cm broad when closed, green or purple at first, ripening orange-buff when 16 months old, with numerous thin, fragile scales, each scale with a bristle-like spine 2-5 mm long. The cones open to 4-6 cm broad when mature, releasing the s immediately after opening. The seeds are 5 mm long, with a 12-22 mm wing; they are mostly dispersed by the wind, but some are also dispersed by s, which pluck the seeds out of the opening cones. The nutcrackers use the seeds as a food resource, storing many for later use, and some of these stored seeds are not used and are able to grow into new plants. However, in many stands current reproduction is not adequate to replace old and dying trees.

It differs from the in that the needles always have two resin canals, and these are not interrupted and broken, so it lacks the characteristic small white resin flecks appearing on the needles in that species. From the , it differs in the cone bristles being over 2 mm long, and the cones having a more rounded (not conic) base.

A specimen of this species nicknamed "Methuselah" located in the of the White Mountains near is 4,700 years old, as measured by annual ring count on a small core taken with an increment borer. Its exact location is kept secret, since an older specimen, nicknamed "Prometheus", was cut down in . [ [http://afp.google.com/article/ALeqM5jbqPkeCraj9vmMDWjweCt0A6fKow Afp.google.com, Age shall not wither them: the oldest trees on Earth] ] It is the oldest known tree in North America, and the oldest known individual tree in the world, although a clonal individual, nicknamed "", a in has roots that have been carbon-dated to over 9500 years old, although the trunk itself is only 600 years old. [ [http://www.info.umu.se/NYHETER/PressmeddelandeEng.aspx?id=3061 World’s oldest living tree discovered in Sweden] (Umeå University Press Release, 16 April 2008)]

Among the White Mountain specimens, the oldest trees are found on north-facing slopes, with an average of 2,000 years, as compared to the 1,000 year average on the southern slopes (Lewington and Parker, 37). The climate and the durability of their wood can preserve them long after death, with dead trees as old as 7,000 years persisting next to live ones (Lewington and Parker, 37).