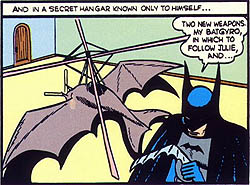 imagesize =
caption = The Bat-gyro. ("Detective Comics" No. 31)
publisher =
debut = "" No. 31
creators =
type =
plane=y
supports =
subcat=BatmanThe Batplane, later known as the Batwing, is the fictional for the . The vehicle was introduced in "Batman Versus The Vampire, I", published in "" #31 in 1939, a story which saw Batman travel to . [Fox, Gardner & Kane, Bob (w); Moldoff, Sheldon & Kane, Bob (a). "Batman Versus The Vampire, I", "Detective Comics" #31, , September 1939.] In this issue it was referred to as the Batgyro, and according to was "apparently inspired by 's first successful helicopter flight" of the same year. Initially based upon a either an or , with a rotor, the Batgyro featured a bat motif at the front. The writers gave the Batgyro the ability to be "parked" in the air by Batman, hovering in such a way as to maintain its position and allow Batman to return. [Daneils, Les, "Sixty Years of the World's Favorite Comic Book Heroes"., 1995. p78.]

The Batgyro was soon replaced by the Batplane, which debuted in "Batman" #1, and initially featured a machine gun. [Finger, Bill (w), Kane, Bob & Robinson, Jerry (a). "The Giants of Hugo Strange", " #1, , Spring 1940.] The vehicle was now based on a aeroplane rather than a helicopter, with a propeller at the front, although a bat motif was still attached to the nose-cone. The Batplane has undergone constant revision since its first appearance, and has even been depicted as having the capability to traverse underwater. [Daniels, Les, "Sixty Years of the World's Favorite Comic Book Heroes"., 1995. p78.] With the launch of the directed "Batman" film of 1989, the Batplane became known as the Batwing, a name which was carried over into the comics.

Batman once maintained aircraft in his original . However, launching these planes so close to 's neighboring estates threatened to compromise Batman's secret identity. The Caped Crusader now "borrows" specially-modified jets and helicopters from Wayne Aerospace's business and military contracts.

Batplane I [ [http://ourworld.cs.com/argentprime/batman.htm BATMAN 1 ( Spr 40): This story was the first appearance of a fixed-wing Batplane, replacing the previous autogyro (and the only time in the comics the Batplane was armed with a machine gun!).] ] and the Bat-Rocket favored Batman's signature look over sleek .

Batplane III is a modified Wayne Aerospace "SlipStream" ($46 million sans "extras"). It's detailed to resemble a standard mid-size corporate jet during take-offs and landings. Some of its features and capabilities are as follows:

* include ergonomic "at-a-glance" viewing levels for all electronics and multifunction displays. The breakaway allows for pilot/co-pilot emergency ejection. The reinforced canopy windows polarize at stealth altitude.

The Batwing appears in the "Batman" and "" movies, used to combat the Joker and the Riddler, respectively.

The Batwing also appears in "," and a revamped version of it is used by in "."

's line includes one set which features an incarnation of the Batplane, though it goes by the name of "The Batwing" (7782-The Batwing: The Joker's Aerial Assault). The set is featured alongside the Joker's helicopter.

In the Batman-themed ride in , riders seemingly follow the Batplane in pursuit of the Joker, , and .