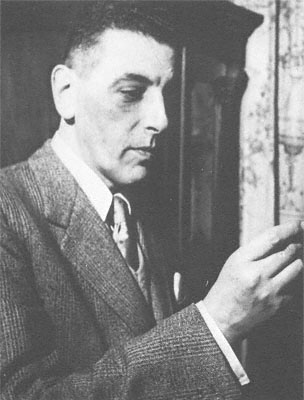 Warburg was born on , , to John Cimon Warburg (a photographer) and Violet Amalia (née Sichel), both of Jewish descent. At the age of 9 Warburg was sent to Wilkinson's boys prep school and then later won a scholarship to attend the prestigious . He was to describe his first two years as 'among the most hateful of my life'. ["An Occupation for Gentlemen", Fredric Warburg, Hutchinson, London, 1959, p. 30.] Whilst he excelled academically, as a Jew he often felt an outsider and he was to find refuge and solace in his love of books.In summer 1917 Warburg was commissioned to serve as an officer in the and was stationed in the area until the end of the war. After demobilization, Warburg was to read chemistry at , but later switched to classics and philosophy, proceeding to become an MA in 1922. That same year he was to start his publishing life as an apprentice at the publishing firm of & Sons Ltd.Warburg's first marriage ( ), to May Nellie Holt, was to produce three sons but ended in divorce in 1932. A year later, on , Warburg married the painter and designer Pamela Bryer (née de Bayou, widowed) and they were to have a son that died of a brain haemorrhage within twenty-four hours of birth.During Warburg served as a corporal in the Home Guard, in the same section where Orwell held the rank of sergeant.Fredric Warburg died of heart failure at , , on at the age of 82.

Upon his appointment as an apprentice at the firm of & Sons Ltd, Warburg found himself under the tutelage of William Swan Stallybrass, a man he regarded as 'the greatest scholar-publisher of his day'. [ibid., p. 121.] Stallybrass died in 1931 and Warburg was to become increasingly dissatisfied with his post at , leading to his eventual dismissal from the company in 1935. Later that same year, he and were to purchase the publishing firm of (that was in receivership) and renamed it as . The firm became renowned for its political stance, being both anti- and anti- (at least communism in its incarnation), a position that put them at logerheads with the ethos of many intellectuals of the time. When parted company with over "", it was to Secker and Warburg that he took his next book "". Thereafter they were to publish all of Orwell's work, with author and publisher becoming intimate friends. With its financial position devastated by paper shortages during and after the war, Secker and Warburg were forced to join the group of publishers in 1951. During the 1950s and 1960s Secker and Warburg were to publish the works of, amongst others, , , , , , and Julian Gloag. In 1961 Warburg was made a director of the Heinemann group, a post he retained until his retirement in 1971. He also published two volumes of autobiography: "An Occupation for Gentlemen" (1959) and "All Authors are Equal" (1973).

In 1952 Warburg became a member of the committee of the Society for Cultural Freedom (S.C.F.), an organisation established to 'promote Western culture and defend it against the communist culture of the East' ["All Authors are Equal", Fredric Warburg, Hutchinson, London, 1973, p. 154.] .The S.C.F. were to produce a cultural magazine known as , which was later to receive sustained criticism when it emerged that much of the money used to produce the magazine came directly from the .More controversy was to follow in 1954 when Warburg was prosecuted for publishing the supposedly obscene book "The Philanderer" by . Although offered the chance to plead guilty and escape with a minimal fine, Warburg opted for the much riskier option of a public trial by jury at the . This decision was vindicated when he was unanimously acquitted by the jury. The presiding judge's summing up was added as an appendix in later editions of "" and also published separately by .