William Morgan Clark is a fictional character and a major antagonist from the universe of the science fiction television series Babylon 5, portrayed by Gary McGurk. His character rarely appeared on-screen, but is a major off-screen presence in the show.

Clark became president when EarthForce One, carrying President Luis Santiago, was destroyed in 2258. He was complicit with the assassination, in order to take office. He believed Earth to be in danger of being overrun by extraterrestrial races, and so the Nightwatch, a fascist, paramilitary organization, was created to find out people suspected to be alien infiltrators or sympathizers.

EarthForce's Chairman of the Joint Chiefs of Staff, General William Hague, suspected that Clark was involved in the assassination, and began a low-level counter-conspiracy that included Captain John Sheridan. In 2260, John Sheridan and General Hague found evidence that Clark had arranged the assassination of Santiago. Hague managed to get the evidence introduced in the Senate, which caused an uproar.

At about the same time, it was revealed that Clark's forces had found a Shadow vessel buried on Ganymede. Clark was having the ship studied in order to learn its secrets. John Sheridan took the White Star back to Ganymede, and destroyed the vessel. Clark soon issued a decree of martial law using the Ganymede incident as an excuse.

When martial law was declared, Hague began armed resistance against Clark's government. Hague was soon killed in a firefight between his ship, the EAS Alexander and the heavy-cruiser EAS Clarkstown. Meanwhile, Mars rejected martial law, and Clark responded by bombing Mars.

Clark dissolved the Senate, and nationalized the media outlets. In response, Proxima III and Orion VII broke away from the Earth Alliance, setting themselves up as independent states. Babylon 5 soon followed these two colonies by breaking away ("Severed Dreams"), after Clark attempted and failed to seize the station and put it under command of the Nightwatch. Clark quickly turned the Earth Alliance into a dictatorship, making ISN into a propaganda machine. Considering Sheridan to be a threat, Clark targeted Babylon 5 and Sheridan specifically with a blockade and a propaganda war ("The Illusion of Truth").

In the fall of 2261, Clark put a policy in place of killing refugees trying to leave the colonies that he was taking military action against. When Sheridan learned that in one case 10,000 innocent civilians were killed by an Earth Alliance vessel, he realized that the time had come to remove Clark. Sheridan after the Shadow War had built a powerful alliance of races and held command of the Whitestar Fleet, giving him the military muscle to fight Earth directly. Sheridan's forces began a systematic campaign against Clark's forces, including a televised message of their own dubbed the "Voice of the Resistance". Large numbers of Earth Force personnel defected, and Sheridan scored his first major victory against Clark by defeating his forces blockading Proxima III. Sheridan himself was eventually captured by his former chief of security Michael Garibaldi (who had been brainwashed by Alfred Bester) and tortured, but was rescued and returned to the fleet soon afterward, which by this time had grown to include a large number of Earth Force ships fighting alongside him.

Clark decided to trap Sheridan's forces with advanced model destroyers which had been fitted with Shadow technology. When Sheridan's second in command, Commander Susan Ivanova, learned of this, she engaged the destroyers with the White Star ships, leaving the rest of the Earthforce vessels behind. Captain James of the EAS Agamemnon opposed Ivanova's decision, but soon realized that Clark would have his destroyers target the Earth ships rather than the White Stars. While Ivanova managed to destroy all the vessels, her White Star was severely damaged by a collision with debris from one of the destroyed vessels and she was injured and left in a near-death state.

Eventually, Sheridan took the fleet directly to Earth, and sent a message saying that they had come home to fight against Clark's tyranny. Realizing that he would soon be captured, Clark committed suicide with a PPG. In one last vindictive act, he turned the planetary defense grid back on the Earth under a "scorched earth" policy - the parallels with Adolf Hitler's end and final policies at the end of World War II are notable. Sheridan and his forces, however, were able to destroy the defense platforms before they fired; Sheridan was prepared to ram the final platform (targeting North America's eastern seaboard) with his badly damaged ship, but the EAS Apollo (previously fighting against Sheridan) appeared, then destroyed the platform and save Sheridan's life ("Endgame").

After Clark's suicide, Senator Susanna Luchenko of the Russian Consortium was named President. President Luchenko announced that the justice department would prosecute those who had committed crimes during Clark's reign of terror and offered amnesty to those who had followed Sheridan. Sheridan would resign in the aftermath of the civil war, but to the chagrin to his former superiors who considered him politically inconvenient, he was immediately appointed President of the Interstellar Alliance. 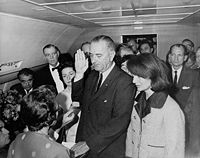 Vice President Lyndon B. Johnson being sworn in as President after the Kennedy assassination