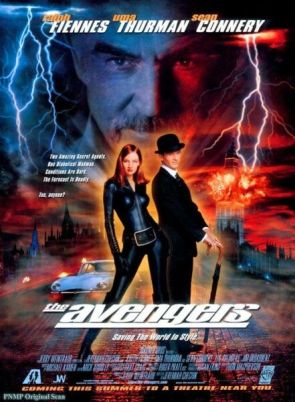 "The Avengers" is a 1998 film based on the British series of the same name from the 1960s.The film was directed by . It starred and as secret agents and , and as Sir August de Wynter, a bent on controlling the world's weather and blackmailing various governments for sun or rain. , the John Steed of the original series, makes a pseudo-cameo as the voice of Invisible Jones.

The film opens with John Steed, agent of The Ministry, in a training course, which he finishes successfully. Next, we see Mrs Emma Peel at home, where she receives a phone call telling her to go to a gentlemen's club - no women allowed - where she meets Steed for the first time. The two head off to the Ministry to meet Mother, who informs them that the Prospero project - an attempt to influence the weather - was sabotaged by... Emma Peel. Mrs Peel claims she is innocent, but she is sent to work alongside Steed to find the real culprit. Mother's off-sider, Father, claims Mrs Peel suffers from a mental disease. They go off to visit Sir August De Wynter, an old ally of The Ministry. He takes an instant liking to Mrs Peel, as they both share a love of weather. Steed and Emma follow a lead to Winter Wonderland - a business that artificially creates heat where there is cold and rain where it is hot with a special machine - where they discover a dead man in a teddy bear suit. The members of a secret organisation - lead by De Wynter - all wear teddy bear suits to disguise their identities. One of them, however, is a double of Emma Peel. Steed arrives in time to save Mrs Peel, as the double jumps off a roof, but disappears. Steed and Emma go off to visit De Wynter at his mansion - but are attacked by mechanical bees. They manage to flee, helped out by Alice, a Ministry agent. Emma is captured by De Wynter, and tries to escape, but finds herself perplexed by the mansion's ever-changing floor plan. She smashes her way through a window, and Steed rescues her. Back at Steed's apartment, however, Mrs Peel is arrested by Father, as Steed visits Invisible Jones, a man inside The Ministry, to investigate the meaning of a map Steed found at Winter Wonderland. Steed determines Father is working with De Wynter after viewing some photos of failed genetic experiments. Father and the Mrs Peel double (from here called Evil Peel) capture Mrs Peel, but are confronted by Mother, who is incapacitated. De Wynter - controlling Prospero and the weather - confronts the world's leaders, boasting that 'weather is not in God's hands, but in mine' and they will buy the weather from him, they will pay a lot for it, and they have got until midnight to pay up. Father and Evil Peel take Emma to a hot air balloon, where Emma escapes during a snowstorm. Father and Evil Peel perish in an explosion. Invisible Jones determines De Wynter is using the Prospero instruments on a secret island. Emma and Steed arrive at the island. Emma defuses the Prospero device just as a hurricane forms over London. Steed duels De Wynter, and impales him, just before he is struck by lightning. Emma and Steed escape just as the base self-destructs, and share champagne on the roof of a building with Mother.

The original script, written by Don MacPherson, was written several years before the film was finally made. There are, quite obviously, several differences, including names, situations, and locations. The original script is not the original SHOOTING script, which is different again.

In the opening, Mrs Emma Peel is a scientist working on the Prospero Project with her husband, Dr. Peter Peel, and his brother, Valentine. The Prospero Project was an attempt to stop global warming through climate engineering. It involved injecting a chemical cocktail into the atmosphere by laser and satellite. Peter Peel gives Emma a diamond ring, shortly before they test the project, which results in Peter being killed. Fast forward several years, as Mrs Peel is contacted and told to visit a gentlemen's club to meet a man named John Steed.

John Steed contacts her in the sauna room, and the two go off to the Ministry to visit Mother. Mother informs them that three agents have been killed while investigating bizarre weather reports. Apparently, at all three sites, a stranger has been identified - Mrs Peel. Emma claims she is innocent. Father, Mother's off-sider, informs Mother that Emma Peel may suffer from delusions. The duo go off to meet Sir August Merryweather - a former Ministry agent, now an eccentric recluse. While Emma meets Merryweather, Steed is caught out in a bizarre storm - where Mrs Peel shoots him! Steed, wearing a bullet-proof coat, survives. His assassin left him with an invitation to a formal picnic at Winter Wonderland. At Winter Wonderland - minutes before Steed and Emma arrive - several men dressed up as teddy bears convene, and soon flee upon the agents' arrival.

Emma finds another invitation to another location. Arriving there, they find a dead man, another invitation... and a leopard cub! Steed takes care of the cub as Emma breaks into the office, where she meets her exact double! They have a fight on the rooftop, but the double - Evil Peel - escapes. Steed hands her a phone - it's Merryweather. Shortly after the warning phone call, Merryweather is struck by lightning and melts. Father informs Steed and Emma that a cyclone has struck. It appears someone has hijacked the Prospero Project and is using it for their evil purposes. Steed breaks into Winter Wonderland, to be confronted by a secretary - in fact, a man who has been tailing Steed! Steed recognises him, and bluffs his way out of trouble. Steed and Emma drive away, but are pursued. They are rescued by Alice - an elderly woman and Ministry agent. She takes them to a mansion seen in a Winter Wonderland postcard. Entering the hedgemaze, Alice has her neck broken, and Mrs Peel is captured by an unknown person. Emma wakes up, inside the mansion, confronted by her husband, Peter Peel! He claims he needs the ring he gave Emma earier. Emma jumps through a window, where Steed catches her and carries her away. Emma is taken for psychological treatment, where Mother reveals that Peter Peel was an agent of the Ministry, and the Prospero Project was a Ministry project.

The explosion that destroyed the Prospero Project was sabotage, and Mother claims that Peter Peel was going to prove his wife was not the traitor by giving her something. Emma realises it is her ring, but claims he gave her nothing. Emma drives to the cemetery to visit her husband's grave, where Steed confronts her. Emma thinks he's there to kill her, but Steed confesses he believes she is innocent. They share a kiss, but Steed receives a phone call - Dr Darling has disappeared. Emma (in disguise) and Steed arrive at the Ministry to talk to Jones, an agent working in Concealment. An incident has made him invisible. Jones talks to Emma about Valentine Peel - Peter's brother - and how he was under surveillance. Father removed the surveillance due to an 'all-clear' from Dr Darling. Jones believes Valentine and Darling were working together, but Steed insists they hurry - the World Council of Ministers will convene soon. As the meeting begins, the weather picks up, and Steed and Emma fend off attackers in a hot air balloon. Emma finds a pair of shoes, with the name DARLING engraved. Jones traces an order of engraved shoes to an ex-Ministry island in Hyde Park. Steed follows Peel to the island, where Emma is confronted by a voice. The voice claims Emma is about to confront her worst enemy... when it's revealed she is in a hall of mirrors! Father attacks Emma and subdues her, as Steed arrives at the island.

Dr Darling removes his face mask, revealing the face of Peter Peel underneath. But even that is a mask - a mask concealing the face of Valentine Peel, the true villain. Valentine planned the explosion at Prospero, and created a robot replica of Emma. Steed subdues Father as Valentine reveals he needs one final component to create the weather equivalent of Chernobyl - a diamond 'cyclone' chip, which Peter Peel inserted into the diamond on Emma's ring (the ring Peter Peel gave Emma on the day he died). Valentine traps Emma in a stasis chamber when she refuses to marry him. A hurricane begins to form over London as Valentine begins to boast to Emma in the stasus chamber... which is actually the robot! Emma has escaped. Steed duels Valentine in a sword fight, but Steed ends up shooting Valentine. Evil Emma, reprogrammed, locks Valentine in an embrace and pulls him to his death. Emma disables Prospero and stops the hurricane, and the two barely manage to escape the base as it explodes. Several days later, Steed and Emma bath at an artificial beach in the Siberian ice fields (created by Prospero), sun-baking in an artificial sun, sharing glasses of champagne.

The film was given almost universally bad reviews. The review aggregator reported that 15% of critics gave the film positive reviews, based on 40 reviews. [cite web|url=http://www.rottentomatoes.com/m/1083461-avengers/ |title=The Avengers Movie Reviews, Pictures - Rotten Tomatoes |accessdate=2008-05-17 |publisher=] reported the film had an average score of 12 out of 100, based on 19 reviews. [cite web|url=http://www.metacritic.com/film/titles/avengers |title=Avengers, The (1998): Reviews |accessdate=2008-05-17 |publisher=] The purists disliked it for its disrespect to the original series (particularly the introduction of a romance between Steed and Peel; a carefully ambiguous subject in the series), and the newcomers were lost by all of the attempts to capture the mood of the original. in the called the film "a big fat gob of maximum crapulosity, the kind of shallow, stupid, big-budget cowpile that smells of ".

Further adding to the confusion, after s, the 150-minute film was cut to 89 minutes, sacrificing much coherence and continuity in the process.

From the "" film review section when the film has been shown on terrestrial British television: "The cult 1960s TV series gets royally shafted by in this stunningly designed blockbuster that's stunningly awful in every other department. Ralph Fiennes and Uma Thurman couldn't be more miscast as John Steed and Emma Peel, here trying to stop villainous Sir August De Wynter (Sean Connery playing himself again) holding the world's weather to ransom and freezing London to an Arctic standstill. Ruthlessly edited before release and packed with arch one-liners, bad puns and vulgar double entendres, this is misguided and misbegotten to a simply staggering degree, while Jeremiah Chechik's mannered direction screeches the action to an unexciting halt at every flat turn. Terrible special effects and zero chemistry between Fiennes and Thurman make this notorious disaster a total waste of everyone's time and energy." ("RT" reviewer Alan Jones.)

* Much of the footage seen in the official trailer for the film comes from scenes cut from the final film. Most of the cut scenes remain in the official novelization of the film, and in copies of the shooting script which continue to circulate on the .
* Many of the scenes and ideas in the movie also featured in episodes of the original series or "The New Avengers", although it is unclear to what extent this was deliberate and how much was simple coincidence. A segment in which Emma is trapped inside a house with an ever-changing floor plan was, however, clearly based upon the original series episode "The House That Jack Built". Also, the "villain who wants to control the weather" plot was borrowed from an episode featuring Diana Rigg's Mrs Peel called "A Surfeit of H20".
* Mel Gibson was considered for the role of John Steed.
* Ralph Fiennes believes "The Avengers" stays true to the original TV series. He admits to not having the same chemistry as and , but says the film delves in the same kind of absurdity as the TV show.