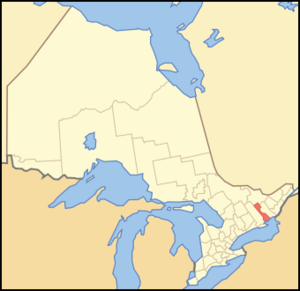 Lennox and Addington County, Ontario is a and of the of . The county seat is Greater Napanee.

The two original counties of Lennox and Addington, joined together in 1860, had been named after and , respectively. Unlike most county mergers in the 19th century, Lennox and Addington was a full amalgamation of the two counties into a single government. Other mergers still retained separate records for each of the joined counties, and were therefore known as "United Counties".

Around the middle of the 19th century, the was built by the province to encourage settlement in the northern sections of the county.

According to the 2006 Census