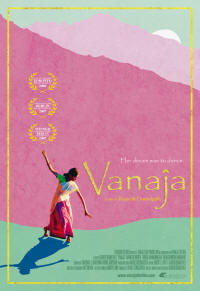 "Vanaja" ( _te. వనజ) is a 2006 Indian written and directed by on a story that constituted his thesis at . The film, made in the , was filmed on a meagre budget of 20000 using a cast of non-professional first-timers for two and a half months.

The film stars as the ; a 15 year-old daughter of a poor fisherman set in the backdrop of a rustic state of in . She plays a girl who learns , a form, while being employed at a local landlady's house. All seems to be going well for her until sexual chemistry evolves between her and the landlady's son, and this eventually leads her being raped by him. The ensuing pregnancy disrupts her simple life, and she must choose how to deal with the child.

The film was screened at several international film festivals such as the and the , among others. While it was nominated for the Diesel Discovery Award at the former, it won the Best First Feature award at the latter. Besides this, it won several jury prizes at other film festivals, and was nominated for the Best First Feature and Best Cinematography awards at the . The film found favour with many international critics as well. ranked the film among the five best foreign language films of 2007. The film, which runs for 111 minutes in its vernacular along with subtitles in , failed to find any distributors for screening in India.

Vanaja () is the 15 year-old daughter of a poor, low caste fisherman from rural . Her father, Somayya (Ramachandriah Marikanti) struggles to support his family despite dwindling catches at sea and mounting debts. One day, Vanaja and her teenage friend, Lacchi (Bhavani Renukunta), watch a theatrical performance by a former (a native form) great, Rama Devi (Urmila Dammannagari). The sequence of events lead to a predicting to Vanaja that she will be a great dancer one day. With permission from her father, she goes to work in the house of the local landlady Rama Devi with the hope of learning . While she is employed as a farmhand, she is entrusted with tending the chickens. When she gets caught while playfully chasing them, she lies to conceal her pranks. Her vivaciousness and spunk soon catch the landlady’s eye. To keep her out of trouble, Rama Devi soon promotes her to a kitchen underhand where she meets Rama Devi’s cook, the old, crusty and extremely loyal Radhamma (Krishnamma Gundimalla).

After settling down at the landlady's house, Vanaja gets invited to play a game of "ashta chamma" (a leisurely played game in rural towns of Andhra Pradesh) against the landlady herself. Knowing that losing isn’t the mistress’s forte, she deliberately gives up her game. This gesture, in turn, eventually secures her the landlady’s mentorship, first in music and then in dance. Vanaja excels at these art forms and seems to be on a steadily ascending path until the arrival of Shekhar (Karan Singh), the landlady's 23 year-old son, from the United States. Shekhar is a handsome, muscular young man who is running for an office in the local government. Sexual chemistry is ignited between Shekhar and Vanaja (still a minor at 15) when flirtation and sexual innuendo bloom.

In the meanwhile, her father's fishing boat is taken away by creditors. He sinks into a state of sadness and begins to drink away her savings. On one occasion, Vanaja’s superior intellect pits her against Shekhar in a public incident which ultimately humiliates him in front of his mother. Matters escalate and on one day when a mischievous Vanaja spies on Shekhar while he is in the shower, he rapes her. She loses her job when she becomes pregnant and gives birth to a boy, much against Rama Devi’s wishes who would have liked her to abort the foetus. Vanaja hopes that the physical evidence of the child will be proof of the rape, and that somehow Shekhar will be brought to justice. However, Shekhar has no desire to marry Vanaja because she is from a lower caste. In the end Rama Devi and Shekhar gain possession of the child, who will grow up to be an upper caste boy.

Director Rajnesh Domalpalli graduated with Bachelors and Masters degrees in in 1984 and 1986 respectively.

While he was working as a in , , he decided to pursue , and graduated with a degree from .

A short synopsis, including a character and a conflict study of "Vanaja", was Domalpalli's project submission in his first semester at the in Fall of 2001. The story was inspired by a child's scream upon being separated from her mother in the film Sophie's Choice (1982). Over the next three semesters, however, the story veered away from its original focus of mother-child separation to what Domalpalli later described as a study of "elements of class distinction and conflict that continue to infuse our society and culture even today." Referring to its emphasis, he said the film was also about "fading institutions of folk art, old buildings that are collapsing, things which we should be protecting - which are a part of our heritage."

With the early version of the script being ready at the end of his fourth semester, Domalpalli's initial intent was to find financing for the film in India and then in the United States. However, he could not find financing. Domalpalli decided to select non-professionals and train them in a year's time. In the United States, producers voiced similar concerns over the marketability of the film and what they referred to as "its lack of cohesion". Besides this, Domalpalli's inexperience in filmmaking added to their concerns.

He imbibed socio-cultural from his upbringing in several rural areas of , and this prompted him to make the movie in . In 2004, he began filming with a meagre sum of 20000 provided by his mother Latha Domalpalli, the eventual producer of the film.

The producers faced a stiff challenge in securing a rural bungalow to serve as the landlady's mansion. Even after obtaining a building as the best possible fit in the coastal town of , infestation of snakes and bats posed a problem for the crew. In addition, the building was not strong enough to support the filming equipment. Under these circumstances, the make-shift s refurbished the building along with space for chicken coops and goat pens as required by the script. To make the space look inhabited, local help was sought for trampling the ground with their livestock. The local people wanted to act as extras in exchange for providing farming tools, and other material for filming purposes. As a result, the crew had to ensure that these extras didn't look into the camera during film making.

"Given the rural nature of the story, and the tendency of most local acting to lean towards the theatrical, it was clear that non-actors drawn from hutments, labor camps and the vast Indian middle class were the right choice," said Domalpalli, referring to his choice of casting. In addition, the inclusion of Radhamma's character was to bring a natural feel for the film. Her behavioristics such as the way she "sits, stands, moves, grunts and groans - that is the way people from a village talk and behave... You would immediately recognize a person who served you breakfast... That makes a point."

Referring to the challenges faced in casting, he said that while they were canvassing local people for auditions, they were warding off rumors that they were after the people's kidneys. When placing an newspaper advertisement for the landlady's character did not seem a viable option, they advertised for household help instead. Upon seeing this, Urmila Dammannagari turned up for the interview with Domalpalli. Inadvertently their conversation veered towards the film and the real motive behind the advertisement became evident. Though initially shocked and despite the fact that she had to commute convert|25|km|mi from her house to the filming location, she took up the role. Professionally Krishnamma Gundimalla, who played the role of Radhamma, carried bricks on her head as a construction worker. On the other hand, Ramachandriah Marikanti, who plays Vanaja's fisherman father, was a sweeper and also worked as a security guard.

For casting Vanaja and Lacchi, he said that they met approximately 2500 children, interviewed about 260 and finally selected two from a shortlist of five to play the roles of Vanaja and Lacchi. Parents of these children were distrustful of them because their wards would have to frequently commute to Domalpalli's house for acting lessons for at least a year. Domalpalli felt that "... to convince people to devote so much of their children's time and energy was hard enough, but to find the right combination of intelligence, commitment and talent as well was probably the steepest cliff they had to climb. While visiting schools for identifying the child cast, , at first was not selected because her hair was short. But after she sang a song on , she was selected for the role. Srinivas Devarakonda, a disciple of well-known Kuchipudi Vempati Chinna Satyam, [cite news|date=|accessdate=2008-08-03|url=http://www.hindu.com/mp/2004/10/11/stories/2004101102030300.htm|title=A performing artiste|work=] taught Mamatha the classical dance form for a year in the basement of Domalpalli's house.

-born Milton Kam, who had shot 10 s and more than 50 , was chosen as the . Since Domalpalli's experience was limited to short video films with a different aspect ratio, he was shocked to look through the film lens the day they commenced the shoot. However Kam helped him to stay composed during the production.

Domalpalli used for the background score. This featured the violin-playing of B. S. Narayanan, a student of renowned Carnatic violinist T N Krishnan. [cite news|date=|accessdate=2008-08-03|url=http://www.hinduonnet.com/2001/08/10/stories/09100708.htm|title=Vintage music from Krishnan's violin|work=] Narayanan played the popular Jayadeva Ashtapadi "Sa virahe", having retuned it in the mode or known as "Behag".

Domalpalli also used "janapada geetalu" in the film; folk songs that are rarely heard. To record these songs for the film, Domalpalli and his crew travelled to towns and villages in rural Andhra.

Though, it was released in the United States on August 31, 2007, the film has not found distributors in India.

After the film's screening at the 2007 , it won a standing ovation from the audience, bringing to tears and emotionally affecting .

The film received an overall positive response from critics, and was particularly noted for the theme and for 's performance. described Bhukya as "a natural star, her eyes and smile illuminating a face of freshness and delight."

It's a touching, believable, often funny but ultimately sad tale of how one class can take advantage of another, even in the guise of patronizing benevolence. Though sometimes shifting abruptly in time, "Vanaja" is an arresting story of modern-day hardship and class exploitation, recalling Charles Dickens as well as Western fairy-tale lore. Domalpalli's settings are ultra-real in detail and color, from the crude, almost feudal deprivations of Vanaja's dirt-floor background to the stately rituals and autocratic entitlement of the well-to-do.

Speaking of Bhukya's performance, the "" writes - "Bhukya delivers an entrancing and natural performance, deftly balancing both the wide-eyed childishness of a young girl with the dawning awareness of life's darker possibilities. She's also an accomplished dancer, which she proves at several points in the film." It adds - "can this wonder-filled film truly be not only Domalpalli's first feature, but originally part of a thesis submission at Columbia University? Both in the film's writing and direction, Domalpalli displays maturity, wisdom and a loving sense of visual and character detail."

Despite the generally positive reception, some critics differed in their opinion of the film, its content and depiction. The "" criticised the film saying that "there's enough mush in the Indian melodrama "Vanaja" to fill an entire season of a TV soap opera,"