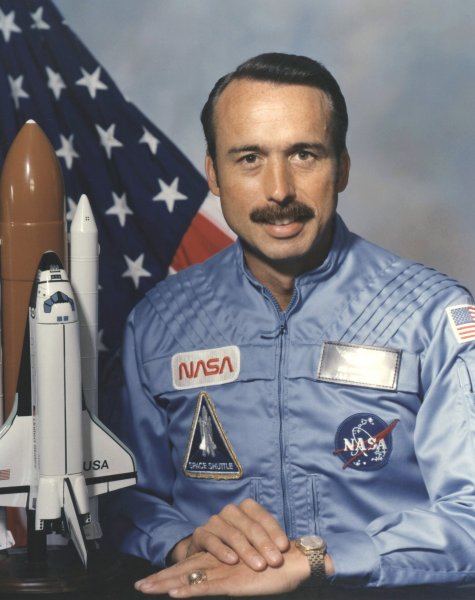 James Craig Adamson (Born , ) is a former astronaut and retired of the .

Adamson was born in . He currently resides in with his wife Ellen and two of his three children

Adamson completed his Bachelor of Science in Engineering and was commissioned a Second Lieutenant in the Army at West Point in 1969. In 1977, he completed a Master of Science degree in at . Additionally he has completed undergraduate and graduate pilot training, paratrooper training, Arctic water and mountain survival training, Nuclear weapons training, basic and advanced officer training, Command and General Staff School, and the Test Pilot School.

As a military test pilot, Adamson has flown research aircraft at , Princeton University, West Point, , and NASA Houston. He has logged over 3,000 hours of flight time in over 30 types of helicopters, piston props, turbo props, and turbo jet aircraft. During the , he flew in the IV Corps area and in with the Air Cavalry as Scout Pilot, Team Lead, and Air Mission Commander. He has also flown with several peacetime flight units at , , West Point, New York, and . Following completion of his Masters Degree in Aerospace Engineering at Princeton University, he became Assistant Professor of Aerodynamics at the United States Military Academy at West Point. While at West Point, he developed and taught courses in Fluid Mechanics, Aerodynamics, Aircraft Performance, and Stability and Control. He also developed flight laboratories in aircraft flight testing and completed a text on aircraft performance. In addition to being an Experimental Test Pilot and Master Aviator, Adamson is also a Certified Professional Engineer and licensed Commercial Pilot. In ground assignments with the Army, Adamson has commanded nuclear capable missile units in Europe and in the United States.

Adamson was employed at the Lyndon B. Johnson Space Center from 1981 to 1992. During the Operational Flight Test phase of the Shuttle Program, he served as a research test pilot and aerodynamics officer in Mission Control. Following completion of the operational test flights he became Guidance Navigation and Control Officer for Shuttle Missions 5 through 11. As research test pilot he also conducted airborne remote sensing studies in Biospheric Research.

Selected by NASA as an Astronaut in 1984, Adamson became qualified for mission assignment on Space Shuttle flights. In November 1985, he was selected to the crew of a Department of Defense mission, which was subsequently delayed due to the Challenger Accident. During the Shuttle Program reconstruction period Adamson was one of eleven astronauts selected to hold management positions within NASA. He served as Shuttle Program Office Assistant Manager for Engineering Integration. In this position he was responsible for the initial development of a reliability based maintenance program for the Space Shuttle program. He also initiated an enhancements program for Shuttle ground processing.

In February 1988 Adamson was assigned to the flight crew of , the first flight of Columbia following the reconstruction period. Columbia launched from the Kennedy Space Center, Florida, on August 8, 1989. The mission carried a classified Department of Defense payload and a number of secondary payloads. After 80 earth orbits in 121 hours, this five day mission concluded with a dry lakebed landing on runway 17 at Edwards Air Force Base, California, on August 13, 1989.

Following STS-28 Adamson once again returned to management. This time he was assigned to the Kennedy Space Center as Director of Shuttle Processing Analysis. He served in this post from September 1989 until October 1990 when he was assigned to the flight crew of STS-43. During this period Adamson developed risk based processing and scheduling programs which resulted in reduction of processing times from 80 days to 50 days.

The nine day mission aboard Atlantis launched from the Kennedy Space Center on August 2, 1991 setting a new world record for payload weight lifted to orbit. The five member crew deployed a Tracking and Data Relay Satellite (TDRS-E), and conducted 32 physical and life sciences experiments. During this flight Adamson performed the first flight test of the Orbital Digital Autopilot following Shuttle retrofit with new General Purpose Computers and new software. After 142 earth orbits in 213 hours, the STS-43 mission concluded with a landing on runway 15 at the Kennedy Space Center on August 11, 1991.

Following Adamson’s retirement from government service in June 1992 he continued as a management consultant to NASA and the aerospace industry. Until September 1994 he served as management consultant and strategic planner for Lockheed Corporation in the area of Human Space Flight Operations. He was also selected by the NASA Administrator to serve on the .

In September 1994 Adamson joined Lockheed Corporation as Executive Vice President of Lockheed Engineering and Science company (LESC) where he was shortly promoted to President and CEO. In late 1995 he was selected by Lockeed Martin to start up and become the first COO of the (USA), a joint venture with Rockwell International Corp. USA subsequently won the Space Flight Operations Contract with NASA to operated the Space Shuttle Program and grew to $1.5 billion annual revenue in the first year.

In 1999 Adamson was recruited by Corporation to be the President of Allied Signal Technical Services Corporation. He remained in that post through Allied Signal’s merger with Honeywell until his retirement in March 2001. Adamson is still active as a consultant and board member for the aerospace industry and still serves on the NASA Advisory Council for the NASA Administrator. A veteran of two space flight missions, Adamson has logged over 334 hours in space.

Adamson has recently been accepted into the Aviators Hall of Fame. Adamson was a two time All-American in pistol competition. Adamson was also a winner of the Army's Excellency In Competition Award, and a recipient of the award. Named an Outstanding College Athlete of America, Adamson captained West Point's pistol team to the national championship in 1969. He was distinguished graduate of his pilot training class as well as distinguished graduate of both his graduate fixed wing and multi-engine pilot training classes. During aerial combat in he earned two Distinguished Flying Crosses, eighteen s, and three Vietnamese Crosses of Gallantry for valor. He has also earned the , , the Meritorious Service Medal, two s, the Bronze Star, NASA's Exceptional Service Medal, two NASA Space Flight Medals, and is a world record holder for space flight lifting the most weight to orbit. Charter Honoree Geneseo Central School Alumni Hall of Fame Class of 1964. Adamson is an Eagle Scout.