Rider on the Rain

Rider on the Rain 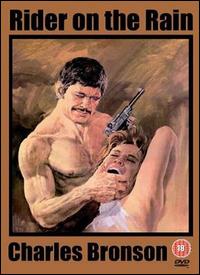 "Rider on the Rain" (Fr. "Le Passager de la Pluie") is a 1969 French thriller starring , directed by , produced by , with film music composed by .

In a god-forsaken, off-season French seaside town we meet Marlène Jobert starring as the diffident, nail-biting, beautiful and lonely Mélancholie "Mellie" Mau, who watches a mysterious stranger step down from the bus into the pouring rain. He follows and eventually rapes her, while her husband (an airline navigator) is away from home. However, when coming to her senses again, she manages to kill her attacker and dispose of the corpse. She decides to keep quiet about the whole incident to avoid complications with her jealous husband. &mdash; Enter as the tough US Army Harry Dobbs, who is out on undercover work trying to track down a serial rapist who has escaped from a military stockade in Germany. He confronts her and she is shocked that he seems to know exactly what has happened, but she sticks to her story of knowing nothing. Since the Colonel is less than forthcoming about his own mission, she also starts to worry about her absent husband possibly being implicated in something shady. Then a dead body is discovered on the beach where she dumped the rapist's body, and further complications ensue...

* as Melancolie "Mellie" Mau
* as Dobbs
* as Juliette
* as Woman
* as Nicole
* as M. Armand
* as Station Master
* as Tony
* as Madeline Legauff
* as Toussaint
* as The Stranger (Mac Guffin)
* as Hostess at Tania's

"Rider on the Rain" is also the main theme of the original movie soundtrack (with lyrics by and sung by French chansonette Severine). The American singer-songwriter wrote English lyrics for the song, and recorded it on her album "Make It With You as "Passenger in the Rain."