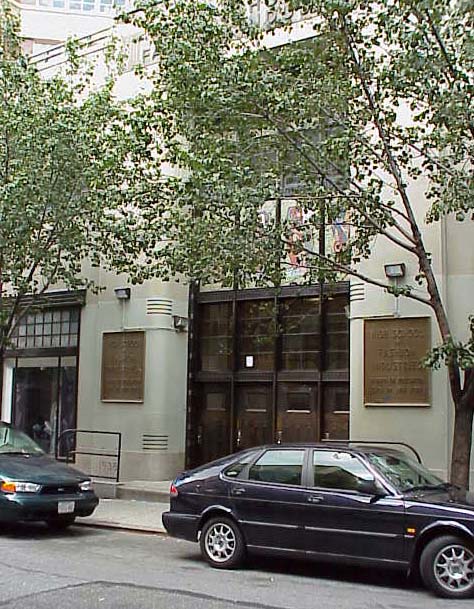 High School of Fashion Industries is a secondary school located in , , . HSFI, which serves grades 9 through 12, is a part of the . HSFI has magnet programs related to fashion design, fashion art, textile design, interior design, and marketing and visual merchandising.

The mission of the High School of Fashion Industries is to provide challenging, creative, and effective occupational, technical and academic training for New York City students. The faculty and administration of our school, working with the cooperation of the parents and student body and with the support of the apparel industry, seek to provide a unique learning experience and a specially tailored program for all students who have an interest in a fashion related field. The school has devised programs which merge academic and occupational knowledge and skills, helping students to meet all graduation requirements and to see the unity within the diversity of learning. [http://schools.nyc.gov/OurSchools/Region9/M600/AboutUs/Overview/Our+Mission.htm]

Admission to the High School of Fashion Industries is highly selective. Students must complete an application to the Board of Education, take the school’s exam that includes an art aptitude test, and submit a portfolio. Students are not expected to have formal training in the arts and many students apply who have little drawing abilities. For prospective students, the school offers pamphlets in most junior high schools and several open house events during the year that include a mock school day with 15-minute classes. [http://www.educationupdate.com/archives/2003/sept03/issue/spot_fashion.html]

Founded as the Central High School of Needle Trades [http://www.catrais.org/FieneCatalogue/Pages%20Misc/Chronology.html]

These murals were painted between 1939 and 1940 by [http://americanart.si.edu/search/artist_bio.cfm?ID=1537] [http://www.time.com/time/magazine/article/0,9171,764150,00.html] and have landmark status. Below is a description of these murals, adapted and condensed from a student handbook written in the late 1950’s. [http://schools.nycenet.edu/region9/fashindhs/schoolinformation/schoolhistory/auditoriummurals.html] Illuminating the walls of the auditorium at the High School of Fashion Industries, the stirring and unusual murals painted by Ernest Fiene attract the eye and mind of all who behold them. Besides being a fine work of art, these pictures serve the function of portraying in dramatic and moving fashion the long generation of hope and despair, and the high standard of social and industrial accomplishment in the needle trades.

The first panel is entitled "Victory of Light Over Darkness." It symbolizes disorganized society being channeled by enlightenment. The background shows old Castle Garden, and immigrants entering from there, fleeing the racial animosities and oppressions of Europe. These immigrants, of many races and creeds, pass to the left to a typical East Side street. The Central background shows the old New York skyline where now the Custom House stands, and in the farther distance appears a rosy light of a future skyline.

In the foreground from right to left are seen sweat shop, home work, and child labor conditions. Sinisterly hovering over this group is a great green figure symbolizing Greed. In his right hand he holds on to the cut cloth, typifying what was known in the needle trades as "the struggle for the bundle." The bundles, as pictured, were auctioned off by the lower class manufacturers to the lowest bidders. This practice created a real menace to the public at large because of the unsanitary conditions under which such clothes were made. There seems no need to emphasize the heartbreaking poverty and brutal struggle for work which it entailed for the worker themselves. To the decent manufacturers and craftsmen in the industry it was a great danger and constant threat of insecurity.

The central group illustrates men, women, and children carrying off bundles for homework, of the kind which is seen pictured right under the figure of Greed. The line of people carrying bundles was a familiar sight on the lower East Side.

The large figure to the left, representing Enlightenment, points with his right hand to a group symbolizing the 1911 of the Triangle fire, a terrible event in the history of the needle trades, which seemed the culmination and summing up of all the injustices and bad conditions under which workers of that time suffered. When a fire broke in the Triangle Waist Company factory, panic followed; workers rushed to the doors, which could only open inward, and in the press, no one could get the doors opened at all. Girls were crushed; some jumped from windows; others were burned to death.

For some time prior to the fire, pressure grew to make sweeping changes in the industry, culminating in a general strike of the cloakmakers in 1910; as a result, forward-looking leaders combined their efforts to create agreements between labor and management which resulted in the dramatic achievement of the Protocol of Peace, the beginning of a new and constructive ear in the needle trades.

It should be noted that in the section illustrating the drafting of immigrants into the sweatshops of the past, two numbered figures appear. These numbe3rs have special meaning: No. 42 was Max Meyer, and No.43 was his father. They had left Alsace because they could not endure the indignity of Prussian invasion and occupation. (Max Meyer became a leader of the garment industry and one of the founders of the High School of Fashion Industries.)

In the second panel (on the opposite wall), the five needle trades are shown working together harmoniously. At the top center are the Ladies’ Garment Workers; to the left are the Shoemakers; to the right are the Furriers; the inserted panel to the right shows Milliners, and the one to the left shows Men’s Clothing Workers. Each of the five sections illustrates the various processes and tools used in the industry. (When this school opened, as the High School of Central Needle Trades, all five of the trades were taught, using the tools illustrated in the panel.)

To the left is shown the Union Health Center, and the way it functions. The insert at the right of the panel shows workers a play, the scene on the stage being "Sunday in the Park" from the ILGWU revue, "Pins and Needles."

The two end sections illustrate present activities and future accomplishment. These include the semi-anatomical figure with the Knickerbocker Housing Project at the right, and the left section with the woman and child symbolizing education and recreation. The buildings immediately in the background commemorate the housing projects of the Amalgamated Clothing Workers’ Union.

And stretching across the entire panel are words taken from "The Song of the Broad Axe," by Walt Whitman, poet of democracy, of American, of all humanity: The main shapes arise! Shapes of democracy, ever projecting