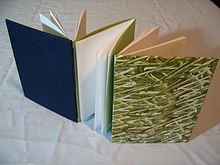 The dos-à-dos format dates back at least to the 16th century, though they were most common in England was in the first half of the 17th century.[4] Two books frequently bound in this form were the New Testament and Psalter, presumably because both were needed during church services. Regardless of content, the outer boards of dos-à-dos bindings were usually embroidered, or covered with leather and then finished with gold.[5]

One example is Irvin S. Cobb's Oh! Well! You Know How Women Are! bound dos-à-dos with Mary Roberts Rinehart's Isn't That Just Like a Man!, as published by George Doran in 1920.[6]

The term dos-à-dos is also used often, though incorrectly, to refer to a single volume in which two texts are bound together, with one text rotated 180° relative to the other, such that when one text runs head-to-tail, the other runs tail-to-head. This type of binding is properly termed tête-bêche (from the French meaning "head-to-toe").[7] Books bound in this way have no back cover, but instead have two front covers and a single spine with two titles. When a reader reaches the end of the text of one of the works, the next page is the (upside-down) final page of the other work. These volumes are also referred to as "upside-down books" or "reversible books."[8]

The tête-bêche format has been used for devotional books since the nineteenth century, and possibly earlier.

It has also been used, for example, to bind two-way language dictionaries, and even for novels.

An example is The Loving Couple: His (and Her) Story, a 1956 bestselling novel by Patrick Dennis. Here, the books are first-person accounts of a rocky marriage, one narrated by the husband, the other by the wife.

The format became much more widely known in the 1950s, when Ace Books began to publish its Ace Doubles. This was a line of tête-bêche genre paperbacks that ran from 1952 until the early 1970s. The Ace Doubles binding was considered innovative, if somewhat gimmicky, at the time; the 18 October 1952 issue of Publishers Weekly describes it as a "trick format."[9]