The Dome Zero (童夢-零, dohmu zero?) was a prototype sportscar from DOME Co. Ltd that was exhibited at the 48th Geneva Auto Show. The 'Dome Project', started by Minoru Hayashi in 1975, had the goal of producing small volume sports cars using knowledge gained from his racing exploits. The Dome Zero was the first of such low volume sportscars, and after failed attempts at getting Japanese domestic homologation their efforts were concentrated on overseas homologation. The project would never be completed.

Genesis of the Dome Zero

The initial design of the Zero started in 1976 with most of the work done on the prototype done by the end of the following year. It was at this time that Hayashi first had the idea to be able to compete at 24 hours of Le Mans, a prospect that had full support from his employees. Getting funds to be able to compete at Le Mans became a top priority, and being able to sell some low volume sportscars would help, too.

The Dome Zero prototype was completed in time for the 48th Geneva Auto Show in 1978 where it was the hit of the show and had received a lot of attention from various investors and interested buyers, but as mentioned earlier, Japanese homologation was discouraged. This led to more energy being committed to a second prototype road car and the Le Mans endeavour, which began the following year from 1979 until 1986.

It is not entirely clear exactly why the Dome Zero (structurally) failed to achieve Japanese homologation for such a successful concept car, but what is clear is that homologation rules were very strict at that time in Japan, and DOME did not have the funds to go through with the costly homologation procedure - which Japanese mainstream auto makers with their giant budgets had no trouble doing. 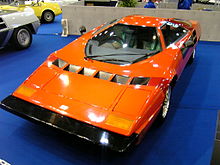 Failure to achieve Japanese homologation led to the development of the Dome Zero P2, a car made specifically for the international market.

The P2 had unsightly large front and rear bumpers added (for the US market) and various other structural strengthening. Even so, the car was shown at the Chicago and Los Angeles motor shows in 1979 and had rave reviews from the US Road and Track magazine. It was at this point, Hayashi realized a high profile could be had by making a Dome Zero racing car dubbed the 'RL'. The RL was raced at the 24 hours of Le Mans motor race in 1979 but failed to finish, and only managed a last place finish in 1980. It was at this time that DOME dropped the Zero road and race car projects altogether and continued contesting the 24 hours of Le Mans motor race with other cars until 1986.

The Dome Zero was not really a supercar by today's standards, but for Japanese privateer carmakers at the time, it was an incredible step forward. It was by no means powerful with its 2.8L L28 SOHC inline six cylinder engine producing 145 PS (105 kW), but it only had to propel a 920 kg (2,028 lb) chassis. With this engine, the Dome Zero offered a power-to-weight ratio that closely matched Porsches of the day. [1]

The Dome Zero was the inspiration behind the Transformers Classics series figure of Transformers Generation 1 character Hot Rod. It was made into a toy in 2006, labeled with the character's alternate name Rodimus due to trademark issues with "Hot Rod". A silver Zero also features as a special prize car in the Xbox game SEGA GT 2002 and drivable from the start of SEGA GT Online. It also makes an appearance in Gran Turismo 4 as a prize for getting all gold in the International A license. The DOME-ZERO CONCEPT ’78 (Standard) is also won as a prize for completing the Supercar Nostalgia Cup in Gran Turismo 5 for PlayStation 3. The car has also appeared in an episode of Yatterman, an anime.