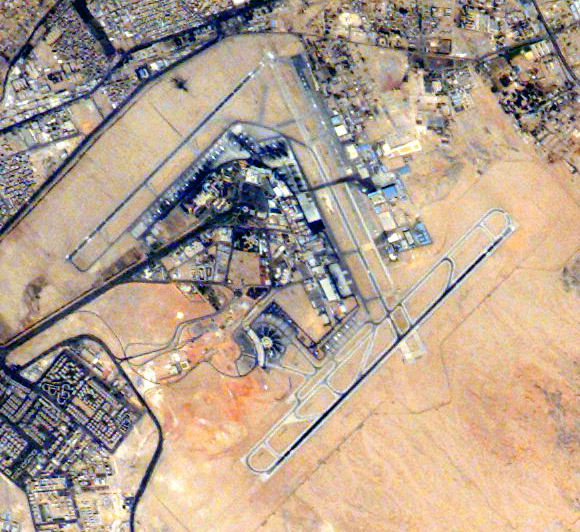 Cairo International Airport Airport codes|CAI|HECA (Arabic: مطار القاهرة الدولي) is the busiest airport in and the primary hub for member . The airport is located to the north-east of the city around 15km from the business area of the city. The airport is administered by the Egyptian Holding Co. for Airports and Air Navigation (EHCAAN), which controls four companies including: Cairo Airport Co., Egyptian Airports Co., National Air Navigation Services and Aviation Information Technology and the Cairo Airport Authority (CAA), which is the regulatory body. In 2004, won the management contract to run the airport for 8 years. [cite web|url=http://www.fraport.com/cms/press_center/dok/31/31283.fraport_ag_wins_management_contract_for.htm|title=Fraport AG Wins Management Contract for Cairo Airport in Egypt|date=2004-12-20|accessdate=2008-10-10]

Cairo International is the second busiest airport in after in . Cairo International Airport handles about 125,000 aircraft departures a year. Fact|date=September 2008With the assimilation of into in July 2008 the airport has the potential to be a major hub with its positioning between Africa, the Middle East and Europe (especially with facilities for the A380).In 2007, the airport served 12,577,524 passengers (+16.7% vs. 2006).The airport has two terminals with a third under construction (due to be completed by November 2008). There are also four runways and a single cargo terminal (the fourth runway was opened in early 2008). Runway 05R/23L is 3,300m long, 05L/23R has a length of 4,000m and 16/34 is 3,180m (all of the runways are 60m wide). The fourth runway, south of the existing airfield is 4,000m by 65m and suitable for the Airbus A380.

Terminal 1 was built in . During , the US built Payne Field Air Force Base to serve the , rather than take over the existing Almaza Airport, located 5 km away. When American forces left the base at the end of the war, the Civil Aviation Authority took over the facility and began using it for international civil aviation. In 1963, Cairo International Airport replaced the old , which had been located at the Hike-Step area in the east of Cairo.The terminal facilities include Departure Hall 1, International Hall 3, and Hall 4 for Private & Non-commercial Aircraft Services. As part of the recent upgrading and facility improvement scheme, the CAA demolished the old hall 3, previously used for domestic arrivals and departures, to reconstruct a new hall to be used for international arrivals. Terminal 1 is commonly known as the "Old Airport," although its facilities were recently given a complete overhaul and are newer than those of Terminal 2, which is still known as the "New Airport."

Terminal 1 is used by for its domestic and international flights. It is also used by , several airlines from the Arab world, and an increasing number of other foreign carriers, such as , which transferred operations from Terminal 2 in . Terminal 1 has 12 gates

The CAA has also inaugurated the "Airport City Concept," to provide an array of services and entertainment facilities to travelers, airport visitors, as well as the general public. The first phase of this, a new shopping mall called the AirMall has been built near Terminal 1's New International Arrival Hall 3.

Terminal 2 was inaugurated in 1986. [cite web|url=http://www.cairo-airport.com/airport_history2.asp|title=Airport History|publisher=Cairo International Airport|accessdate=2008-10-10] It serves primarily European and Far Eastern airlines, airlines from the Gulf region, and sub-Saharan Africa. After the , all flights to the US and Canada, including those operated by EgyptAir, were transferred to Terminal 2. EgyptAir has since returned its North American services to Terminal 1 following the completion of renovations.

The architecture of the terminal building limits the possibility of expansion. There is significant congestion when more than 3 flights check in simultaneously, or more than 2 planes arrive at the same time.The terminal itself has 7 boarding gates. Capacity rarely reaches that maximum.

In July 2008 the Cairo Airport Company (CAC) said it would allocate $400 million to develop the airport's Terminal 2. The move is meant to increase the terminal capacity from 3 million passengers to 7.5 million annually. Fathi Fathallah, the CAC chairman, said renovation works would start in mid 2009. The project will double the terminal's capacity, but also to upgrade services offered to passengers, “in line with the high quality of services offered by Terminal 3, which will be inaugurated in October,” he said.

Given projected growth, and the limited ability to expand Terminal 2, the CAA has begun construction of Terminal 3, which is currently scheduled to open in fall 2008. It will be located adjacent to Terminal 2, and the two terminals will be connected by a bridge. Access roads will be redesigned, and the parking lots will be relocated. The terminal was originally projected to open by the end of 2007 but this was delayed to late 2008. Fact|date=September 2008

With its hub at the airport EgyptAir's operations will be overhauled with the opening of the state of the art Terminal 3. The airline will transfer all its operations (international and domestic) to the terminal. To implement the “Move Under One Roof” concept all alliance members serving the airport will relocate to the terminal.

The official opening ceremony will take place in October to coincide with several Egyptian national holidays. Operations at the terminal will take place in several phases with the first phase beginning 17th November 2008 when (EgyptAir's domestic subsidiary) move all operations to the new building. This will be followed by EgyptAir's own domestic flights, then its international operations and finally those of Star Alliance members.

*Two piers of extendible capacity and gates facilities serving domestic and international traffic, handled through contact and remote. The main building and the piers are connected by concourses. There will be 23 gates. Two of the gates will be equipped to handle the aircraft.

*Land side works including bridges and fly-over serving the traffic to and from the terminal building, surface car park areas, a new access road connecting the airport with the Autostrad road|Autostrad (Cairo ring road) and upgrading the access road.

*A luxury 350-room five-star hotel, to open as Le Méridien Cairo Airport will open at the beginning of 2010 as part of the terminal (with a direct connection to the building).

Upon completion of this terminal, Cairo International Airport will double its airport capacity. Fact|date=September 2008

The airport is connected to the city by two roads, the main access road is the Salah Salem Road that goes through Heliopolis from downtown and another secondary road, the Autostrad road.

The Airport Bus Service (both air-conditioned and non air-conditioned) operates from Terminal 1. There are several bus stop at Tahrir Square, downtown Cairo, Mohandesin, and along Pyramids Road in Giza.

There are plans to expand the to serve the airport. The new line, which is in an advanced stage of planning, will link the airport at one end, and Mohandessin (in Giza), at the other. It is expected to be operational by .

Cairo International Airport has been the origination or termination for several flights that did not reach their final destination properly:
*On , Flight PK 705 the inaugural flight on the - - - route crashed during a scheduled night approach to Runway 34 at Cairo International Airport, after the crew failed to monitor and correct the descent rate. 119 of the 125 on board the Boeing 720 - 040 B (AP - AMH) were killed.
*On , EgyptAir Flight 763 crashed in killing all 30 passengers on board.
*On , EgyptAir Flight 864 crashed into an industrial complex in , after crew failed to correct the descent rate. 20 of the 52 on board were killed. Another 72 on the ground were killed in the crash.
*On , was hijacked in , . were set off on board and 60 of the 96 passengers and crew members perished.
*On , , heading from , crashed off , . All 217 passengers and crew members were killed. The cause of the crash remains disputed.