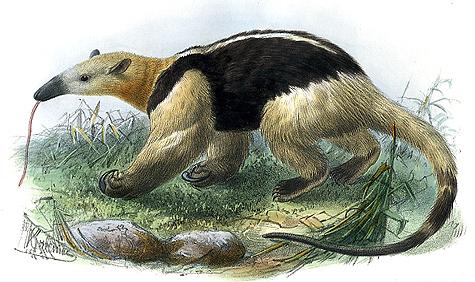 Tamandua is a of s. It has two members: the ("Tamandua tetradactyla") and the ("Tamandua mexicana"). They live in s and s, are semi-, and possess partially s. They mainly eat s and s, but they occasionally eat s. In captivity, they will eat s and . They have no teeth and depend on their powerful to break down their food.

Besides the Tamanduas, there are two other s, the and the . Tamanduas are much smaller than the Giant Anteater, which lives on the ground and is found in a wide range of s, including grasslands, s and s. The Giant Anteater eats mostly ants and termites. Tamanduas are larger than the Silky Anteater, which ranges from extreme southern to , and possibly , and is completely arboreal. It eats mostly ants.

The word "tamanduá" is for "anteater", and in Tupi and Portuguese refers to anteaters in general. The tamandua is called in those languages "tamanduá-mirim" ("mirim" means "small").