West Falkland is the second largest of the in the , with an area of approximately 4,532 km² (5,413 km² including the adjacent small islands). It is a hilly , separated from by the .

The island has a population of fewer than 200 people, scattered around the coastline. The largest settlement is on the east coast, which has an . Other settlements include Albemarle, Chartres, , , , , Port Stephens, and , most of which are linked by road and also have airstrips and s. In 1986, the population was 265, in 2001, it had atrophied to 144 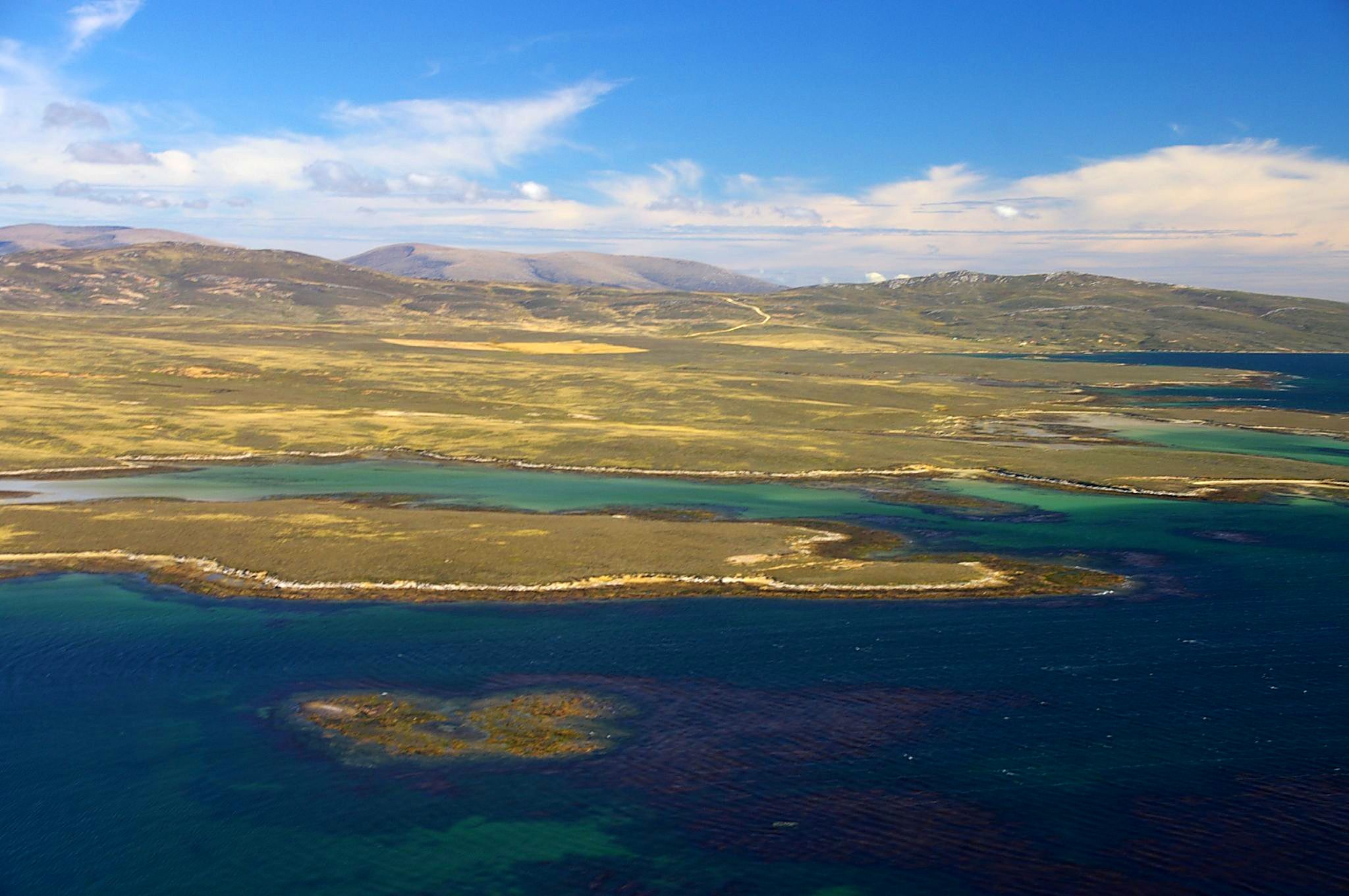 right|thumb|300px|">West Falkland from near Keppel IslandWest Falkland is more hilly near the east island; the principal mountain range, the , runs north and south parallel with . Mount Adam, the highest hill in the islands, is 2315 ft. high.

The major industry on the island is , while it is also known for its and colonies. Fishing is also popular in the two main rivers, the Warrah and the Chartres.

In the 19th century as today, indigenous land fauna was very scanty. A small wolf, the , the "loup-renard" of , is extinct, the last having been seen about 1875 on the West Falkland. It is commemorated in the name of one of the island's rivers, the "Warrah". Some herds of cattle and horses ran wild; but these were, of course, introduced, as were also the wild hogs, the numerous rabbits and the less common hares. All these have greatly declined in numbers, being profitably replaced by sheep.

The southernmost point of West Falkland is , and the most south-westerly . On the southerly side lie high cliffs with an abundance of seabirds and to the west are some white sandy beaches with beautiful clean water and rolling sand dunes with tall grass. Set just back from the top of the cliffs is a single wooden hut locally referred to as Uncle Tom's Cabin. The beaches are a favourite haunt for s and are unpolluted save for the occasional piece of wreckage and the odd washed-up tree trunk.

Most of the layers of West Falkland and its surrounding islands are slightly inclined from the horizontal. This inclination shows different types from rocks in different places. The quartzites of Port Stephens and Stanley are more resistant than the arenaceous sediments of the formation at . The , near have experienced tectonic forces of uplift and folding by which the quartzite beds of Stanley are inclined to the vertical.

In West Falkland there are several dykes that cut the rocks of the western islands, but these dykes, unlike the previous ones, are chemically more unstable and have been eroded and the only indication of their existence is the aligned linear depressions. In the margins of these depressions there is evidence of contact baking or formation adjacent to the once molten basalt dyke.

Despite the first recorded landing on the (main islands) of the Falklands taking place on West Falkland, it was settled remarkably late.

Early explorers reported the remains of canoes on West Falkland, and while the provides compelling evidence of a native American discovery it is unclear whether it was a one way trip, or indeed if the canoes were not swept in from .

Captain of the "Welfare" made the first recorded landing on either of the main islands (West and East Falkland) on 29th January, 1690, at on the other side of the headland from . He said:

:"Wednesday this morning we weighed and stood unto an harbour on ye west side and there came to ane anchor and sent our boat on shoar for fresh water and did kill abundance of geese and ducks but as far as wood there is none."

The lack of wood is somewhat surprising, since while there were no trees growing there, driftwood frequently washes up on Falkland beaches, although this may be accounted for by the sheltered nature of Bold Cove. Strong ended up giving his name to the islands, by naming which gave its name to all the islands.

In 1867 there were no settlers on West Falkland, and the government issued a proclamation offering leases of grazing stations on very moderate terms. In 1868 all the available land was occupied.

These days it is also home to two RAF Reporting Posts: , which is near in the south of the island, and in the north. These military units are openly listed in the RAF document "RAF Today" (see below).

In early 2007 the Falkland Islands Government awarded a contract to supply an East-West ferry to Workboat Services Ltd. This is due to start in late 2007 and will run between and New Haven.

West Falkland saw some activity during the in 1982; , and were all occupied by Argentine troops during the hosilities and where subjected to occasional British Naval bombardment and air attacks.

The most significant skirmish on West Falkland was perhaps the , near Port Howard.

saw several Argentine helicopters downed after British Harrier jump jets attacked them. took place to the west of the island and the has gone down in British Special Forces history.