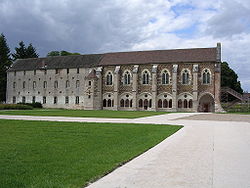 Cîteaux Abbey (French: Abbaye de Cîteaux) is a Roman Catholic abbey located in Saint-Nicolas-lès-Cîteaux, south of Dijon, France. Today it belongs to the Trappists, or Cistercians of the Strict Observance (OCSO). The Cistercian order takes its name from this mother house of Cîteaux, earlier Cisteaux, near Nuits-Saint-Georges. The abbey has about 35 members.

Cîteaux Abbey was founded in 1098 by a group of monks from Molesme Abbey, seeking to follow more closely the Rule of St. Benedict, under the leadership of Saint Robert of Molesme, who became the first abbot, Saint Alberic, the second abbot, and Saint Stephen Harding the third abbot, who wrote the Carta Caritatis, that described the organisation of the order. 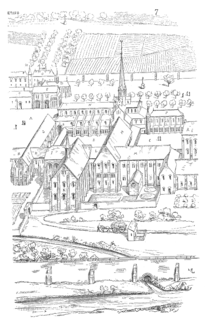 Saint Bernard of Clairvaux, a monk of Cîteaux Abbey, left it to found Clairvaux Abbey in 1115, of which he was the first abbot. His influence in the Cistercian order and beyond is of prime importance. He reaffirmed the importance of strict observance to the Rule of St. Benedict.

The great church of Cîteaux Abbey, begun in around 1140, was completed in 1193. The Dukes of Burgundy subsequently used as their dynastic place of burial.

The influence of the Cistercian order grew very rapidly, owing much to Saint Bernard, and at the beginning of the 13th century the order had more than 500 houses. Cîteaux was then an important center of Christianity. In 1244, King Louis IX of France (Saint Louis) and his mother Blanche of Castile visited the abbey.

In the beginning of the 16th century, the abbey was a strong community of about 200 members. The abbey was badly hit by the French Wars of Religion.

The abbey then slowly declined for the next century. In 1698, the abbey only had 72 professed monks.

In 1791, during the French Revolution, the abbey was seized and sold by the government.

In 1898, the remains of the abbey were bought back and repopulated by monks of other abbeys.

The monks, faithful to a tradition of manual work, sell their products to the public: the well reputed Cîteaux cheese, but also honey sweets and caramels.