Marginal propensity to save

Marginal propensity to save

The MPS plays a central role in Keynesian economics as it quantifies the saving-income relation, which is the flip side of the consumption-income relation, and thus it reflects the fundamental psychological law. Marginal Propensity to Save is also a key variable in determining the value of the multiplier.

Or mathematically, the marginal propensity to save (MPS) function is expressed as the derivative of the savings (S) function with respect to disposable income (Y).

Now, MPS can be calculated as follows:

This implies that for each additional one unit of income, the savings increase by 0.4.

There are different implications of this above-mentioned formula.

Mathematically, In a closed economy, MPS + MPC = 1 [5] [6]since an increase in one unit of income will be either consumed or saved.

In this diagram, the savings function is an increasing function of disposable income i.e. savings increase as income increases. [10] 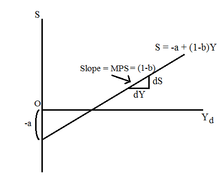 An important implication of Marginal Propensity to Save is measurement of the multiplier. A multiplier measures the magnified change in aggregate product i.e. the gross domestic product, resulting from a change in an autonomous variable (for example, government expenditure,investment expenditures,etc.).

And thus,as it goes on and on, it results in a magnified, multiplied change in aggregate production initially triggered by a change in autonomous variable, but amplified by the creation of more income and increase in consumption.

Mathematically, the above effect can be stated as:

And it goes on and on. We can express this as:

Thus, total magnified change in production due to change in an autonomous variable by $1

The effect of a multiplier effect can be measured as:

If the MPS is smaller, then the multiplier process is also greater as less saving is induced, and more consumption is induced with each round of activity.[11]