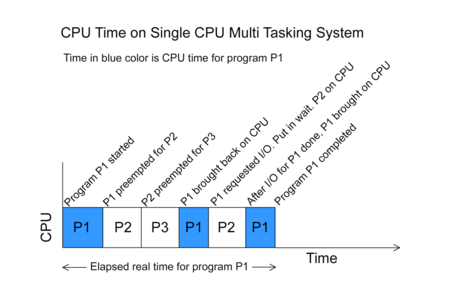 CPU time (or CPU usage, process time) is the amount of time for which a central processing unit (CPU) was used for processing instructions of a computer program, as opposed to, for example, waiting for input/output (I/O) operations. The CPU time is often measured in clock ticks or as a percentage of the CPU's capacity. It is used as a point of comparison for CPU workload of a program.

In contrast, elapsed real time (or simply real time, or wall clock time) is the time taken from the start of a computer program until the end as measured by an ordinary clock. Elapsed real time includes I/O time and all other types of waits incurred by the program. 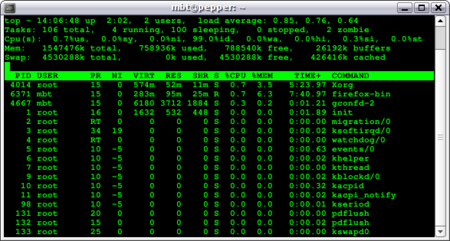 The Unix command top provides CPU time, priority, elapsed real time, and other information for all processes and updates it in real time.

This process took a total of 0.337 seconds of CPU time, out of which 0.327 seconds was spent in user space, and the final 0.010 seconds in kernel mode on behalf of the process. Elapsed real time was 1.15 seconds.

The following is the source code of the application nextPrimeNumber which was used in the above example.

On multi-processor machines, a computer program can use two or more CPUs for processing using parallel processing scheduling. In such situations, the notion of total CPU time is used, which is the sum of CPU time consumed by all of the CPUs utilized by the computer program.

Elapsed real time is always the same or more than CPU time for computer program which use only one CPU for processing. If no wait is involved for I/O or other resources, elapsed real time and CPU time are very similar.

If a program uses parallel processing, total CPU time for that program would be more than its elapsed real time. (Total CPU time)/(Number of CPUs) is used to calculate elapsed real time if work load is evenly distributed on each CPU and no wait is involved for I/O or other such external resources.

Example: A software application executed on a Hexa-core processor creates three Unix processes for fulfilling the user requirement. Each of these three processes creates two threads, enumerating a total of 6 working threads. Computation is distributed evenly on the 6 independent threads. If no wait for resources is involved, total CPU time is expected to be six times the elapsed real time.