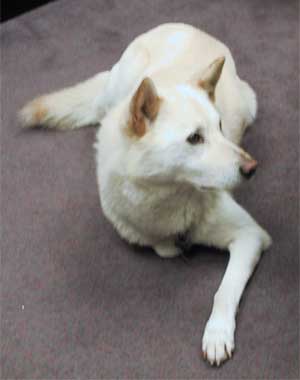 image_caption = A white Jindo
name = Korean Jindo Dog The Korean Jindo Dog (: 진돗개; : 珍島개) is a breed of a known to have originated on in . Although relatively unknown outside Korea, it is celebrated in its native land for its fierce loyalty and brave nature.

The Jindo is a medium-sized, double-coated -type dog that gives the initial impression of agility, strength, alertness, and dignity.

Within the Jindo breed, the head carries a great deal of type. Identifying and separating the Jindo from mixes and other breeds is often done by close examination of this feature.

*The topskull of an adult dog should be broad and rounded between the ears and free from wrinkles.

*The underjaw is well-developed and helps give a round or octagonal shape to the head when viewed from the front. Abundant, stiff hairs stand away from the cheeks.

*The ears are triangular in shape, ranging in size from small to medium. From a side view, the upright ears lean forward past vertical. When the dog is relaxed, the ears lean slightly off to the sides of the head instead of on top of the head. When the dog is alert, the mobile ears move higher on the head. The inside of the ears should be well-furred. Ears in puppies are normally down up until 5-6 months of age.

*The eyes are almond/round. They should be always be a shade of brown, with dark red-brown being preferred. Some dogs have light brown eyes but this color is not desired. No Jindo should have blue eyes. The outside corners of the eyes are angled upwards and gives the dog an alert, cheerful expression.

*The nose color should be black on non-white dogs. White dogs may have flesh or pink in the center of the nose. (Looks like black was rubbed off rather than having solid edges.)

*The muzzle is round and in proportion to the head, never giving a bulky impression. The lips should be tight and black-pigmented. The tongue is strongly desired to be solid pink. No Jindo should have a solid blue-black tongue such as found in Chows and Sharpeis.

The Jindo naturally comes in a range of body styles and/or proportions. Several organizations have attempted to categorize the different body styles while others have simply posted a single ideal standard for the body. In common speech, there are two body styles that are used most often. The Gyupgae and the Heutgae. The former is very muscular and shorter in body, with a depth of chest equal to one-half the height at the withers and a shorter loin, while the latter is more slender with somewhat less depth of chest and a slightly longer loin, resulting in a height to length ratio of 10:11.

Because of the different body styles, there will be a range of what organizations consider desirable height/weight in dogs. It would be fair, though, to consider the average height for male dogs to be 19 1/2 to 21 inches and for female dogs to be 18 1/2 to 20 inches. On average, males weigh in at 35-45 lb. while females weigh in at 30-40 lb. Many dogs reach full height by 5 months of age, but it may take 2 years to physically mature.

In Jindos, front and rear leg angulation should be moderate. Dogs should be built for ease in traveling long distances over various hilly terrain but also for strength and speed in hunting game animals. Feet are tight and compact.

Tails are thick and strong. Tail shapes are straight up, sickled, or curled.

The Korean Jindo Dog is well known for its unwavering and gentlemanly nature. Because of this there is a misconception that a Jindo will be loyal only to its first owner or the owner when young. However, there are many examples of older Jindos being adopted out of shelters in the United States and becoming very loyal friends to their new owners. They are highly active and are certainly not indoor-only dogs. Jindo dogs need reasonable space to roam and run. Jindos require a lot of care and attention. If kept in a yard, the fencing must be at least 6 feet high.

Because the Jindo is an active and intelligent dog, it requires frequent interaction with people or another dog in the family. For some the Jindo may even be too intelligent, for it will commonly think for itself. The same intelligence that allows the dog to pick up commands and tricks very fast can be a bit too much to handle. If left alone for a long stretch, it finds its own entertainment. A young Jindo may attempt to climb over a fence or wall, even by way of a tree or digging under, or tear up the house if confined indoors. Because of this many Jindo dogs are found in animal shelters, abandoned by owners who often did not know what they were getting into when accepting the responsibility of a Jindo. Also because the breed is not well known, there are many good Jindo dogs available for adoption.

With Jindos, establishing the hierarchy (humans above dogs) with care and affection is essential. It is important to socialize Jindos at a very early age. As with humans, Jindos will test boundaries to establish themselves at the top of dog hierarchies--a true alpha dog--due to the way in which the breed evolved.

Jindos serve as excellent watchdogs, able to distinguish family from foe, friends from strangers. The Korean army is known to use Jindos as guard dogs at major bases, where it is said they can learn to recognize 30,000 individual scents. They are conscious of their owners' reactions towards others and act accordingly. Because Jindos so rarely bark aggressively, especially in familiar environments, an owner may lend special credence to the warning of his/her pet. Many are also finicky eaters and will not take food from strangers.

Some Jindos display a curious aversion from running water and avoid situations that might get them wet. They let themselves be washed, although with great reluctance.

People adopt Jindo dogs because of their beautiful appearance, high intelligence, loyalty, and sometimes for their fighting spirit, then quickly realize that raising a Jindo dog to be a well-behaved member of the family takes a lot of effort and time. Many Jindo dogs are abandoned in the U.S. because of the difficulty of training them. Potential owners who are prepared and determined to have an intelligent, loyal, but independent companion can adopt a Jindo dog from shelters.

There is no written record of the origin of the Korean Jindo Dog but many authorities agree that the Jindos originated and existed on for a long time.

It is now protected under the Cultural Properties Protection Act.

In 1962, the Korean government designated the Jindo as the 53rd Natural Monument [http://www.cha.go.kr/english/search_plaza/ECulresult_Db_View.jsp?VdkVgwKey=16,00530000,36&queryText=(V_ECULNAME%3Ccontains%3EJindo)] ; and passed the "Jindo Preservation Ordinance". Jindos marched in the opening ceremonies of the 1988 Olympic Games in Seoul, Korea. The United Kennel Club recognized the Jindo on January 1, 1998.

The Jindo is renown for their outstanding hunting ability, due to their courage, cunning, and pack sensibility. Besides the usual prey consisting of medium to large game, they have been known to hunt extremely dangerous animals such as Siberian Tigers (one of the three dogs that are able to, the others being the Siberian Laika dog and the Pungsan/Poongsan Dog) in the wild. Also, they have mainly been utilized as deer and boar hunters. There have been anecdotal reports of Korean owners being awakened by their Jindo one morning to be led deep into the forest to a deer the Jindo had taken down alone. There have also been reported cases in America of intruding coyotes being killed by Jindos defending its territory.

In traditional Korean hunting without guns, a pack of well trained Jindos was extremely valuable. A master with a loyal pack could hunt without much trouble at all, for when the pack brings down a deer, boar or other target, one of them returns to the master to lead him to the prey while the others stand guard against scavengers.

In 1993, a 7 year old female Jindo dog named "Baekgu" , born and raised in , was sold to a new owner in the city of which is located about 300 kilometers (186.4 miles) away from the island. The dog escaped her new home and returned to her original owner after 7 months, haggard and in skin and bones. Baekgu lived with her old owner, who decided to keep the loyal dog, until the dog died of natural causes 7 years later.The story was a national sensation in Korea and was made into cartoons, a TV documentary, and a children's storybook [ Song, J. (1997). "돌아온 진돗개 백구" [Return of Baekgu the Jindo dog] . Seoul, Korea: Daegyo. ISBN: 8939514130 ] . In 2004, erected a statue of Baekgu in her hometown to honor the dog.

Jindo dogs amazingly will themselves as puppies. Even off lead or without direction, they will often relieve themselves in the farthest corner of the yard. They are also renowned for their almost uncanny homing instinct.

It's stated that pure Jindo dogs are rare outside of Jindo Island even in Korea, however this very much depends on the definition of what a pure Jindo dog is. The situation is complex and not easy for an outsider to navigate.

*A dog with pedigree papers has no guarantee of purity. Even if there is no issue of impropriety in registering dogs, closer examination of pedigree papers can reveal unknown dogs, often referred to as "Jindo-sans", in a 7- or even 3-generation pedigrees. Conversely, a dog without pedigree papers could have a known history for 7 generations but the breeder simply chooses not to participate in politics and does not register the dog with any organization.