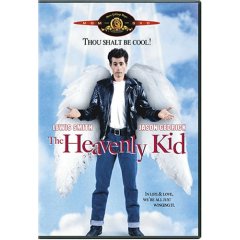 The story starts out showing a young greaser-type , Bobby (Lewis Smith) racing a rival toward the edge of a cliff in a game of chicken. Bobby apparently wins as his rival "chickens" out by diving out of the car before Bobby does. Bobby is unable to get out of the car in time and dies in a fiery accident as his car falls over the cliff. Following a strange trip, Bobby learns from his new Rafferty (Richard Mulligan) that he needs to earn his ticket "Uptown" by acting as a Guardian angel for Lenny Barnes. Bobby tries to help Lenny by giving him a makeover and attempting to help him win the affection of the hottest girl in school, Sharon. However, Bobby eventually realizes that the new lifestyle Lenny is leading is not noble, as it causes him to rebel against everyone including his parents. In doing so, Bobby eventually realizes that Lenny's mother (Jane Kaczmarek) is his former girlfriend and is married to the man he died racing against. Bobby breaks one of the Uptown rules and reveals himself to Lenny's mother. Bobby then learns that he is actually Lenny's father. In a scene reminiscent of the opening sequence Lenny has a car race against Sharon's former boyfriend. Much like Bobby's car race, the race ends with Lenny and Bobby flying over the edge off cliff and the car exploding in a fiery wreck. However, Bobby helps prevent Lenny from dying and they climb up the cliff together. Bobby helps Lenny realize the error of his ways as he reunites with his former girlfriend who was by his side even during his "nerdy years". They then watch Bobby and Rafferty fly into the sky on a motorbike, and Bobby eventually does go on the escalator to Uptown.

The soundtrack consists of 10 songs featured in the movie. It was taken out-of-print almost as quickly as it became available due to manufacturing defects on the LP: during the tracks Animal Attraction and Crusin' Tonight there are several mis-aligned grooves that transferred to all copies of the LP which caused major skips and poor quality sound.

In 2007 a digital copy of the soundtrack became available online on certain blogs for soundtracks. The soundtrack had been completely remastered by a fan and everyone who had commented on the quality was blown away by the perfection of it.Fact|date=July 2008

*The high school scenes were filmed at , in .
*The subway used in the film is the MARTA system in .
*The working title of the film was "Teen Angel."
*This is the second and last film from director Cary Medoway.