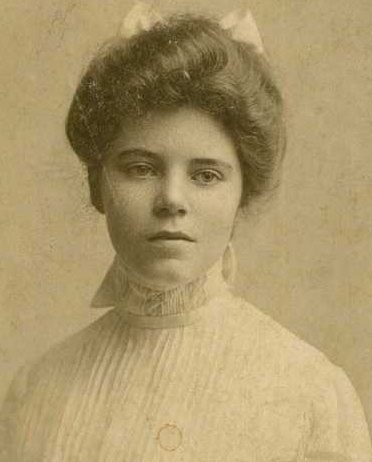 Alice Stokes Paul (January 11, 1885 &ndash; July 9, 1977) was an American suffragist leader. Along with (a close friend) and others, she led a successful campaign for that resulted in the passage of the Nineteenth Amendment to the U.S. Constitution in 1920.

While she was in England in 1908, Paul heard speak at the University of Birmingham. Inspired, Paul joined the (WSPU), where she met fellow American Lucy Burns. Her activities with the WSPU led to her arrest and imprisonment three times. Along with other suffragists she went on a and was force-fed.

In 1912, Alice Paul joined the (NAWSA) and was appointed Chairman of their Congressional Committee in . After months of fundraising and raising awareness for the cause, membership numbers went up and, in 1913, Alice Paul and Lucy Burns formed the Congressional Union for Women Suffrage. Their focus was lobbying for a to secure the right to vote for women. Such an amendment had originally been sought by suffragists and in 1878. However, by the early 20th century, attempts to secure a federal amendment had ceased. The focus of the suffrage movement had turned to securing the vote on a state-by-state basis.

When their lobbying efforts proved fruitless, Paul and her colleagues formed the (NWP) in 1916 and began introducing some of the methods used by the suffrage movement in Britain. Tactics included demonstrations, parades, mass meetings, picketing, suffrage watch, fires, and hunger strikes. These actions were accompanied by press coverage and the publication of the weekly "Suffragist."

In the election of 1916, Paul and the NWP campaigned against the continuing refusal of President and other incumbent Democrats to support the Suffrage Amendment actively. In January 1917, the NWP staged the first political protest to picket the . The picketers, known as "Silent Sentinels," held banners demanding the right to vote. This was an example of a campaign. In July 1917, picketers were arrested on charges of "obstructing traffic." Many, including Paul, were convicted, incarcerated and tortured at the in Virginia (later the Lorton Correctional Complex) and the Jail.

In protest of the conditions in Occoquan, Paul commenced a hunger strike. This led to her being moved to the prison’s psychiatric ward and force-fed raw eggs through a plastic tube. Other women joined the strike, which combined with the continuing demonstrations and attendant press coverage, kept the pressure on the Wilson administration. In January, 1918, the president announced that women's suffrage was urgently needed as a "war measure." Wilson strongly urged Congress to pass the legislation. In 1920, after coming down to one vote in the state of Tennessee, the secured the vote for women.

Paul was the original author of a proposed to the Constitution in 1923. She opposed linking the ERA to rights, as did most early feminists. It has been widely reported that Paul called abortion "the ultimate exploitation of women." There has been a suggestion that although she did not want the ERA to be linked with abortion, it was for political, rather than ideological or moral, reasons. An article in publication "The Touchstone" (2000) provides the following commentary on the relationship between the ERA and her views on abortion:

Alice Paul did oppose the linkage between the ERA and abortion, but that was because of her political astuteness rather than any disagreement with abortion. Paul felt that by linking the ERA with abortion, the ERA would not pass through Congress. Willis wrote, "She did not address issues of birth control, i.e., abortion, or even women's sexuality, and was concerned that the radical women of the 1960s might alienate support by emphasizing these issues... [S] he said that even if women did want to do many things that she wished they would not do with their freedom, it was not her business to tell them what to do with it, but to see that they had it." This demonstrates that Alice Paul supported equal rights for women, including the right to choose abortion... [Finlay, B., C. Walther, and A. Hinze " [http://www.rtis.com/touchstone/summer00/04abort.htm What the Founders of Feminism Really Thought About Abortion] " "The Touchstone," Vol. X, No. 3, Summer 2000.]

This article however directly conflicts with a statement published by activist Mary Meehan, from an interview with a colleague of Paul's:

When I worked with Alice Paul I asked her about the abortion question — point blank. She said directly, "Abortion is just another way of exploiting women." Then she went on to explain that the National Woman's Party was organized for the benefit of women. Killing female babies was no way to benefit or protect women. [Evelyn K. Samras-Judge in an interview with Mary Meehan on March 21, 1986. [http://www.meehanreports.com "Life Quotes."] Meehan Reports. Retrieved on: July 22, 2007]

The ERA would not find its way to the Senate until 1972, when it was approved by the Senate and submitted to the state legislatures for ratification. Approval by 38 states was required to ensure adoption of the amendment. Not enough states — only 35 — voted in favor.

In 1929, she became the primary resident for 40 years of a house bought by , located in the Capitol Hill neighborhood of , for the NWP headquarters. The house is now known as the and is a historic house and museum of the U.S. women's suffrage and equal-rights movements.

Alice Paul died on July 9, 1977 at the in , near her family home of Paulsdale, at the age of 92. [cite news |first= |last= |authorlink= |coauthors= |title=Alice Paul, a Leader for Suffrage And Women's Rights, Dies at 92; 'Silent Sentinels' |url= |quote=Alice Paul, a pioneer of the women's movement who helped lead the fight for women's suffrage and who, more than 50 years ago, helped draft the forerunner to today's proposed equal rights amendment to the Constitution, died yesterday at the Quaker Greenleaf Extension Home in Moorestown, N.J. She was 92 years old. |publisher= |date= July 10, 1977 |accessdate=2008-07-04 ]

Alice Paul has created a long legacy of woman’s rights. Her portrait was placed on an English postage stamp in 1981.She was portrayed by in the 2004 movie .

There is a dormitory at Swarthmore College named in her honor.