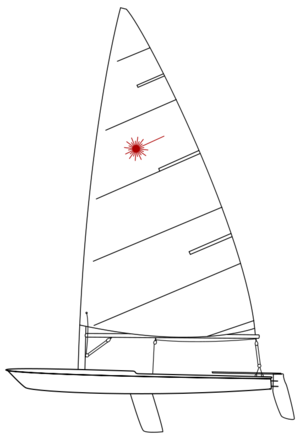 The International Laser Class sailboat, also called Laser Standard and the Laser One is a popular class of small sailing dinghy. According the Laser Class Rules the boat may be sailed by either one or two people, though it is rarely sailed by two. The design, by Bruce Kirby, emphasizes simplicity and performance. The dinghy is now manufactured by several boat manufacturers worldwide (see External Links).

The Laser is one of the most popular single-handed dinghies in the world. By 2007, the number of boats produced exceeded 190,000. A commonly cited reason for its popularity is that it is robust and simple to rig and sail.

"Laser" is mainly used to refer to the Laser Standard (the largest of the sail plan rigs available for the Laser hull), but this can be very confusing as there are a series of other "Laser"-branded boats using different hulls. Examples include the Laser II and Laser Pico, but these may be called Laser 2, and a Pico.

The boat's history began with a phone call between Canadians Bruce Kirby and Ian Bruce. While discussing the possibility of a car-topped dinghy (a boat small enough to be carried on a roof rack of a typical car) for a line of camping equipment, Bruce Kirby sketched what would be known as "the million dollar doodle". The plans stayed with Kirby until 1970 when "One Design and Offshore Yachtsman" magazine held a regatta for boats under $1000, called "America's Teacup". After a few sail modifications, the Laser easily won its class.

The prototype was originally named the "Weekender"; the sail held the letters TGIF, a common American abbreviation for "Thank God It's Friday". It was renamed Laser and officially unveiled at the in . The Laser became a men's Olympic-class boat in , and a special Olympic edition of the boat was released that year in commemoration. A version with a smaller sail, the (see below), will be a women's Olympic-class boat beginning in .

The first world championship was held in 1974 in . Entrants came from 24 countries, and first place was won by Peter Commette from the United States. It then became an Olympic venue at the in Atlanta. The greatest champion of Laser Class is (nickname "El Demolidor") from Brazil; he won the world championship eight times and won two gold and one silver Olympic medals.

The various sizes of Laser are all ; they have only a main sail. The Laser Standard sail has sail area of 7.06 m² (76 ft²) and, especially in higher winds, is most competitive when sailed by a muscular person weighing more than 80 kg (175 lb).

Laser sailing and racing presents a unique set of physical and skill based challenges. Fast Laser sailing requires an advanced level of fitness in order to endure the straight legged hiking and body-torque techniques required to get upwind and reach quickly. Downwind sailing is unique in that Lasers can sail by the lee and reach. Fast Laser sailors switch back and forth between these two points of sail to surf and sail around waves.

A Laser's date and place of manufacture can be determined by looking at the serial number stamped into the transom or under the fairlead on the bow on older hulls. This serial number is unique to the boat and is also the same number that must be displayed on the sail if used for racing. The Laser is unusual in this aspect, since almost every other sailing craft has the numbers assigned by the national organization. This means that the same Laser can be moved between countries without having to change numbers.

It also means that the Laser Standard has a six-figure number which reflects the large number of boats manufactured worldwide.

In Europe the smaller Radial has surpassed the original Laser Standard in popularity, and even has supplanted the Europe Dinghy as the Women's Singlehanded Dinghy for the 2008 Olympics. The radial uses the same hull and fittings as the Laser Standard, but has a smaller sail, shorter lower mast section and has a different cut of sail to that of the standard or 4.7. Optimal weight for this rig is 121-159 lbs.

A smaller sail plan for the Laser was developed about a decade later. The sail area was reduced by 35% from the Standard, allowing even lighter sailors to sail. The same formula as the Radial is kept. Optimal weight for this rig is 110-120 lbs.

A company called Rooster Sailing has designed and created a larger rig called the Rooster 8.1 which is specifically made for heavier sailors. The inaugural 2007 British Nationals were won by Steve Cockerill (of Rooster Sailing), to date (6 March 2008) sail number 242 has been sold and they started at number 81. There are two variants - one with a 3.6m lower mast and one with an extender for a standard laser lower mast - made of fiber-glass.

A fourth and lesser-known variant is the "Laser M Rig". This sail was the first attempt at making a smaller rig for smaller sailors. It employed the same lower mast section, but a shorter top section. This variant flopped when compared to the other rigs. This is primarily because the shorter top section didn't allow enough bend to be induced in the mast (as the bottom section is very stiff), this made the boat difficult to sail and de-power especially in heavier winds.

In recent years and to move the boat with the changing times, the basic sail controls have been upgraded by means of the XD performance kit. Fitting this kit allows the outhaul and cunningham to be adjusted more easily when under sail via cleats fitted to the deck so that the lines are always available to the sailor.