Oneonta is a city in southern Otsego County, New York, USA. As of the 2010 U.S. Census, had a population of 13,901.[1] Its nickname is "City of the Hills." While the word "oneonta" is of undetermined origin, it is popularly believed to mean "place of open rocks" in the Iroquois language. This refers to a prominent geological formation known as "Tablerocks" at the western end of the city.

The city is surrounded by the town of Oneonta, a separate municipal and political jurisdiction. Oneonta is home to the State University Of New York at Oneonta and Hartwick College.

Oneonta Municipal Airport (N66) is north of the city. 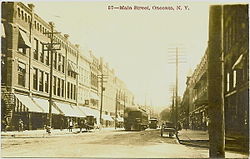 Prehistorically, Algonquin and Iroquois Indians inhabited the land around what is today the city of Oneonta. The Iroquois gained exclusive control during the early historic period.

The area's early pioneers arrived around 1775 and consisted mainly of Palatine Germans and Dutch settlers moving out of the Hudson Valley. The army led by General James Clinton passed through the area in order to join the Sullivan Expedition in 1779.

The first hamlet appeared around 1800 and was later known as "Milfordville." In 1830, the town of Oneonta was formed from parts of two other towns in the county. Milfordville changed its name to Oneonta in 1832, and, in 1848, incorporated as a village within the town.

When the Delaware and Hudson Railroad reached Oneonta, the village began a growth spurt due to its role as a railroad center and its growing industries. Oneonta was once home to the largest locomotive roundhouse in the world.[2]

The village incorporated as a city in 1908.

The city is in the northern foothills of the Catskill Mountains, lying between Binghamton and Albany.

The Susquehanna River flows westward past the south part of the city.

The architecture of Oneonta is mostly plain townhouses, and low-rise commercial buildings. Oneonta has very few industrial complexes. Because of its location, Oneonta does not serve as a prime industrial city.

There are several historic buildings that were originally homes of prominent people. The Fairchild Mansion was placed on the National Register of Historic Places in 1974 and was formerly the home of George Winthrop Fairchild, one of the original partners with Thomas Watson. Fairchild and Watson were the founders of what eventually became IBM.[4] Also, George I. Wilber House is a historic home located in the City. It was built in two phases, 1875 and about 1890. It is a three story wood frame structure on a stone foundation in the Late Victorian style. It features a three story, round corner tower, cross gabled roof, and a large, very decorative wrap-around porch with a porte-cochere. In 1997 it became home to the Upper Catskill Community Council of the Arts. It was listed on the National Register of Historic Places in 2000.[5]

The tallest building in Oneonta is Nader Towers. Standing 14-stories high, the building is owned by the City of Oneonta Housing Authority and is operated as a senior citizen's housing dwelling. 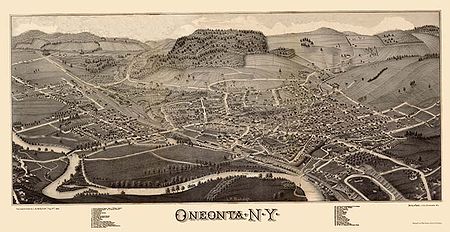 Oneonta, New York, as depicted on an 1884 panoramic map.

The City is overseen by Mayor Dick Miller, and a Common Council; Aldermen are Maureen Hennessy, Paul Robinson, Erik Miller, Michael Lynch, Jr., Rodger Moran, Veronica Diver, Lizabeth Shannon and Kevin Hodne. [1] The City's website[6] includes a broad range of information about the City and City government, including a calendar of all governmental meetings, copies of all Common Council minutes and the complete text of the City Code.

The city also has four elementary schools; Valleyview, Riverside, Greater Plains, and Center St. Each has about 200 students.

The city of Oneonta operates two major municipal parks, Neahwa Park and Wilber Park. Information regarding recreational opportunities within the city's parks can be obtained from the Department of Recreation.

In 2008 the city of Oneonta celebrated its Centennial with monthly events throughout the year beginning with the New Year's Eve parade. For other events see [2]

The Arts in Oneonta