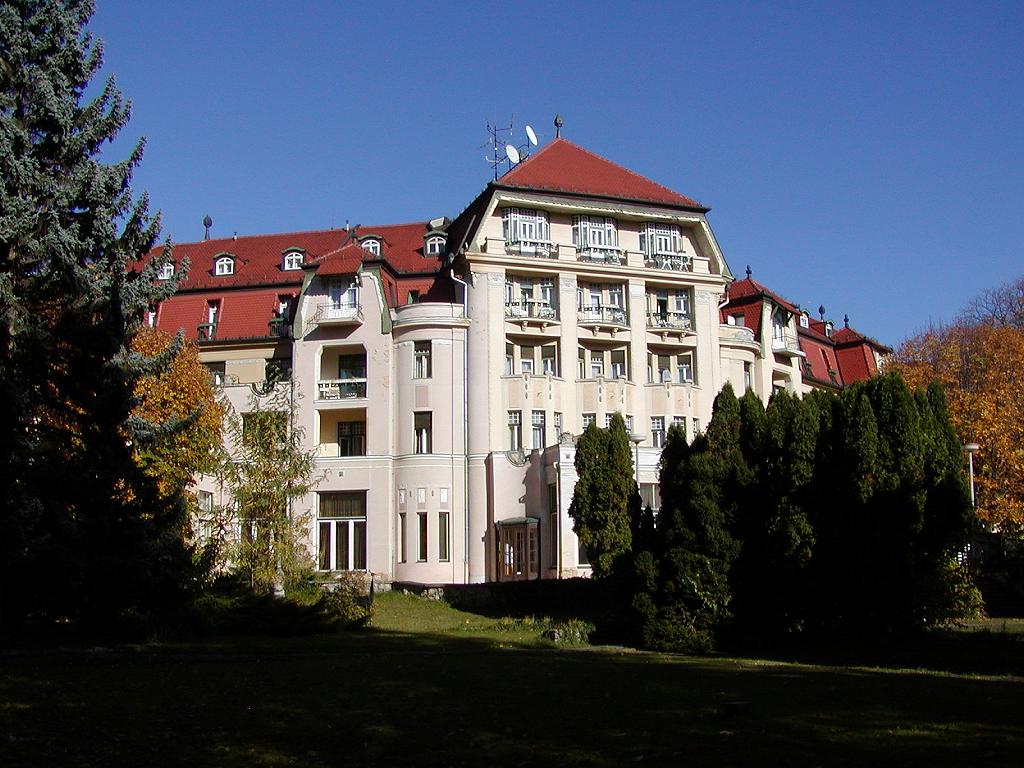 
symbol = Coat of arms of Piešťany.png

Piešťany (Audio|Sk-Piestany.ogg|pronunciation; _de. Pistyan; _hu. Pöstyén, _pl. Pieszczany) is a town in . It is located in the western part of the country within the and is the seat of its own district. It is the biggest and best known in Slovakia and has around 30,000 inhabitants.

The first human settlement in the area is dated to the prehistoric times, about 80,000 years ago. People were attracted to the site by abundance of game in the vicinity of the thermal springs that did not freeze in winter.

A small female statue called was found in the nearby village . It is made of ivory and is dated to 22,800 BC. It currently resides in the museum. In another nearby village, Krakovany-Stráže, a treasure consisting of luxury items made of glass, bronze, silver, and gold was discovered in three graves from 200 - 300 AD. The surroundings of Piešťany also include the n castle of .

Piešťany was first mentioned in written records in 1113 (under the name Pescan). At that time it consisted of several smaller settlements. The medicinal springs were already popular in the . They were visited by the Hungarian king Matthias Corvinus. The first book mentioning the Piešťany springs was "De admirandis Hungariae aquis hypomnemation" (About the Miraculous Waters of the Hungarian Monarchy) by Georgius Wernher, published in 1549 in . In the 16th century, the Piešťany spa was also mentioned by two prominent physicians, Johann Crato de Crafheim (who served to several Holy Roman Emperors) and Andrea Baccius Elpidianus (a personal surgeon of the Pope). The first monography ("Schediasma de Thermis Postheinsibus" by Ján Justus Torkoš) was published in 1745. But in the 16th and 17th centuries, Piešťany also suffered from Turkish raids and anti-Habsburg uprisings.

Throughout the centuries Piešťany was owned by several noble families; the last of them, the Erdődys, owned the area from 1720 to 1848, and the spa until 1940. The Erdődy family built the first spa buildings in 1778. They were damaged by a destructive flood in 1813. In 1820 the spa buildings were expanded and remodeled in neo-classical style and named Napoleon spa. The Erdődy family also established the Spa park in this period. In the years 1889 to 1940 the Winter family rented the spa from the Erdődys and brought it to international fame. The Winters improved spa treatment as well as accommodation and entertainment for visitors. They built several spa buildings and hotels.

The spa attracted many aristocratic visitors, including . In 1917, three monarchs (Wilhelm II of Germany, Karl I of , and ) orchestrated their war strategy during the negotiations in the "Thermia Palace" hotel.

In 1945 Piešťany received the official status of a town. In 1959, Sĺňava water reservoir was built south of the town. In the late 1960s and 1970s more spa buildings were built. In 1973 the village of , located on the left bank of the Váh river, was amalgamated with Piešťany, but it regained independence after a referendum in 1995. In 1996 the town became the seat of a district.

On , , at the final match in the World Junior Championships of between Canada and the Soviet Union there was a , now famously known as the . Both teams were disqualified from competition as a result.

On , three members of the were arrested in Piešťany. They were lured into a trap by agents of the British Security Service who were posing as arms dealers from Iraq.

Piešťany is situated in the western part of Slovakia, in the valley of the river, at an elevation of 162 m (531 ft). The mountains form the eastern boundary of this part of the Váh valley. The highest hill of these mountains, Inovec (1,042 m or 3,419 ft), is about 25 km north of the town. The hills immediately east of the town (about 10 km away) reach a height of about 700 m (2,300 ft). On the western side, the valley boundary is formed by the , which are somewhat lower and further away from the town. The valley is open to the south, and thus has a warm and sunny temperate climate.

Most of the town is located on the right bank of the river. South of the town is the water reservoir created by a dam on the Váh river. The artificial canal Biskupický kanál and the main river branch join in the town. Another short branch of the river (Obtokové rameno) creates the Spa Island.

The hills of Považský Inovec are mostly covered with forests. These consist of and in the lower elevations, and in the higher elevations. The Váh valley is used for agriculture. The main products are cereals, sugar beet, animal feed, and pork.

Piešťany is located on the route of the D1 motorway from to with connections to and . The main railway route from Bratislava to Žilina and also goes through the town. The town has an airport, mostly used for international s for spa clients (10,000 passengers in 2007). The municipality operates a local public transport system with 11 bus routes (as of 2008).

Because of frequent floods in the past, most buildings are dated to the 19th and 20th century. The most notable exception are the ruins of a medieval monastery from the 13th century. The Napoleon Spa is a complex of Neoclassicist spa buildings built between 1822 and 1862. The Kolonádový most bridge, constructed by in 1930-33, is a preeminent functionalist construction with many precious art objects.

The Piešťany spa has a capacity of two thousand beds (as of 2004) and treats over forty thousand patients a year. More than 60% of the clients are foreigners (mostly from Germany, the Czech Republic, Israel, Arab countries, and Austria). The spa specializes in treatment of chronic rheumatic and arthritic diseases and post-accident lesions of joints and bones.

The spa is located on the Spa Island between two branches of the Váh river, at the site of several s with temperatures of 67–69 °C. The water originates in a tectonic break at 2,000 meters depth. The - water from the springs is used in pools and tubs. Sulfurous mud extracted from the bed of a side channel of the river is also used for treatment in the form of thermal mud pools with temperature 39 °C and for partial and full body packs. Spring water and is complemented by , exercise, massage, medication, and diet.

In the summer tourist season, the town hosts several cultural events. An annual summer music festival, established in 1955, takes place in the Piešťany arts centre. This venue, with a of 622, also offers other concerts and theatre shows. Country Lodenica is a festival of folk and established in 1999. It takes place south of the town, on the shores of Sĺňava water reservoir.

In 2005, a tradition of sculpture exhibition in the Spa Park was renewed [http://www.sochapiestany.sk] , displaying works of more than 20 artists. Such exhibitions took place annually between 1967 and 1993.

Piešťany also has several museums. The Balneological Museum [http://www.balneomuzeum.sk/eversion.htm] focuses on archeology, history and ethnography of the region, as well as the history of Slovakia's spas in general. It was established in 1933 by the Winter family. Another small museum commemorates the life of the Slovak poet , who lived in Piešťany from 1945 to 1958. Finally, a new museum at the airport exhibits a collection related to the Slovak military history.