/daɪˈmɛtrədɒn/; meaning "two measures of teeth") was a predatory synapsid genus that flourished during the Permian period, living between 280–265 million years ago (during the Artinskian to Capitanian stages).

As a synapsid it was more closely related to mammals than to true reptiles such as lizards and snakes. It is classified as a pelycosaur. Fossils of Dimetrodon have been found in North America and Europe. Dimetrodon had a sail on its back, which is thought to have been used for regulating body temperature, or for display.

Dimetrodon was one of the largest land animals and the apex predator of its time. Dimetrodon’s diet could have included freshwater sharks, amphibians, reptiles and other amniotes. The amphibian Eryops and freshwater shark Xenacanthus were prey. Humeruses of Eryops and skulls of Xenacanthus were found to have teeth marks matching the shape of the teeth of Dimetrodon.[1] Dimetrodon probably hunted based on sight and smell. Different types ranged in length from 90 to 400 centimetres (35 to 160 in) and weighing 14 to 300 kilograms (31 to 660 lb).

The structure of the bones indicate that it was cold-blooded and had low metabolism . There are few channels in the bones, which indicates limited circulation. For proper metabolism, Dimetrodon needed external heat.[2] The growth pattern of Dimetrodon is unclear. Analysis based on the length and ossification of the thigh, the ulna and the humerus, shows a poor correlation between the size and relative age of individuals.[3] There was a difference in habitat between juveniles and adults in Dimetrodon. Younger animals lived mainly in habitats with plenty of shelter, such as swamps and reed-lined banks. The adults preferred the open areas of flood plains.[4] This is the finding of fossils from the Wichita Group of Texas. The length of the upper arm and thigh, the main measure that was used to distinguish between young and adult specimens, were examined and it was determined what type of sediment the fossils occurred. A similar difference in distribution between young and adult specimens, was also found for Ophiacodon and Eryops and is also known from modern crocodiles and water turtles.[4] 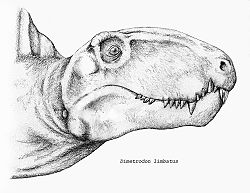 A head of Dimetrodon limbatis, drawing based on the skull from the book Review of the Pelycosauria (by Cope)

Dimetrodon has two types of teeth, shearing teeth and sharp canine teeth. Its name, in fact, means "two-measures of teeth". Dimetrodon was one of the first animals with differentiated teeth and the teeth were suitable for killing animals then tearing them to pieces. Dimetrodon has a large skull with a temporal fenestra behind each eye orbit on the lateral surface, a distinguishing feature of synapsid skull. This made possible new attachment sites for jaw muscles, which could run faster and create mastication. Based on the osteology of the temporal region, the posterior part of the palate and mandible, powerful jaw muscles of Dimetrodon was found to have differentiated. Two groups of muscles have been reconstructed: the adductors and the pterygoideus. The adductors were from temporal to the inside of the lower jaw and caused the closing of the jaws. The pterygoideus ran from the Pterygoid processes of the sphenoid and the sphenoid bone to the articular, one of the bones in the lower jaw, and caused a backward movement of the mandible. The development of the coronoid process in Dimetrodon compared with other quadrupeds , led to an increase in the length of the moment of external muscular and thus greater bite force.[5][6] The construction of the inner ear and vestibular system of Dimetrodon were described by Case, but he drew no conclusions about the possible function of these organs.[7]

In a 2001 study on the biomechanics of the dinosaur Albertosaurus's teeth, William L. Abler observed that examined Dimetrodon teeth possessed serrations so fine they resembled a crack in the tooth.[8] Though Albertosaurus had similar serrations, the base of each serration included a round void which would have functioned to distribute force over a larger surface area.[8] These voids, termed an ampulla, would hinder the ability of the "crack" formed by the serration to propagate through the tooth.[8] Dimetrodon was found to lack adaptations for preventing "crack" propagation.[8][citation needed]

The sturdy legs of Dimetrodon were spread beside the body. Judging from the construction of the legs Dimetrodon was a relatively fast and smoothly moving animal, especially compared to its solid build herbivorous relatives. The shape of the hip bones, the hind legs and the joints between the vertebrae can be seen.[9] 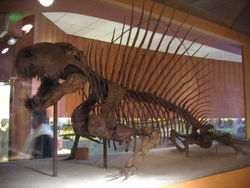 The most striking feature of Dimetrodon has been the one meter long protrusions at the back of the spine, the spinous processes also referred to as spines. These spines have a wide base and then his long and slender with a pointed tip. It is believed that the spines were connected by a solid skin and thus formed a sail on the back.

Many suggestions have been made about the function of the sail; as camouflage among reeds while it waited for prey, for sexual display, or literally as a sail while swimming.[10] Romer and Price[10] first suggested that it served a mechanical function and strengthened the backbone, but Romer[11] later realized that the sail had evolved with features strongly suggesting an early attempt at temperature regulation. The fact that these spines are present in both Dimetrodon and Edaphosaurus, two animals in similar geological periods, would suggest that the spines had a significant value in the survival as result of environmental factors. In a study of the relationship between body temperature and blood pressure, Rodbard analyzed the evolution of thermoregulation, which he thought was a one possible function of the sails of Dimetrodon and Edaphosaurus.[12] The spines of Dimetrodon have grooves on the base that were presumably ingested by blood vessels and thus ensured good bloodflow through the skin of the sail. The theory is that Dimetrodon was active in the early morning when the sun rose. The sail would be pointed towards the sun and would absorb heat allowing rapid warming. This allowed Dimetrodon to hunt at a time when other animals were not sufficiently warmed up and were slow. The sail increased body surface area by 50%. According to calculations by Bramwell Fellgett, it took a 200 kg (440 lb) Dimetrodon approximately one and a half hours for its body temperature to go from 26 to 32 °C (79 to 90 °F) [13] A study by Haack concluded that warming was slower than previously thought and that the process probably took four hours.[14] In order to cool its body in the hot midday sun, Dimetrodon turned its sail away from the sun, causing the heat to drain. The rapid warming using the sail give Dimetrodon an edge over larger animals, weighing over 55 kg. Smaller animals had higher body surface-to-mass ratio, making them hotter than Dimetrodon. The prey of Dimetrodon would therefore have been mostly large animals like Diadectes, Eryops and Ophiacodon. The changing climate during the Permian period, when the temperature increased, is a possible reason for the extinction of Dimetrodon since the sail meant no benefit over other animals and was rather a disadvantage due to its fragility.

The genus Dimetrodon was created in 1878 by the American scientist Edward Drinker Cope and described during the infamous Bone Wars between him and Othniel Charles Marsh. The type species is Dimetrodon incisivus. The genus name is derived from the Greek di ("two"), metron ("measure") and odon ("tooth"), a reference to the fact that the animal had teeth in two sizes. The species designation means "pertaining to the cutting tooth (incisor)," a reference to the size of the incisors. The holotype, bearing the name fossil is AMNH 4116. 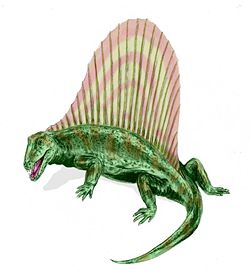 Cope had actually previously described other species of Dimetrodon. In 1877 he named a species Clepsydrops limbatus but in 1940, Romer and Price assign this species to Dimetrodon. Cope believed in a close relationship between Clepsydrops and Dimetrodon. Nowadays it has become clear that both genera are not very closely related: Clepsydrops is now considered a member of the Ophiacodontidae. Dimetrodon was giving special place: in 1925 by Franz Nopcsa, as member of the specailly created Dimetrodontinae, but was added to the family Sphenacodontidae by Eleanor Daly in 1973.

The significance of this classification of Dimetrodon depends on the system used. In the classical Linnaeïsche system, it belongs to the genus order Pelycosauria. Since this classification, the Therapsida and mammals traditionally been placed in the order Pelycosauria, this order is in fact paraphyletic as not all descendants belong to it. Not only the order as a whole is paraphyletic but the family within that order which contains the ancestor of the later therapsiden and mammals. Now it is the family Sphenacodontidae to which Dimetrodon belongs. 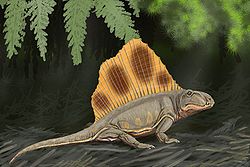 Many species have been described by Edward Drinker Cope during his expeditions in 1880. Romer Alfred Sherman described a few species in the 1930s and 1940s.[16] Most of the type specimens from the collection of which Cope based his descriptions were not released from the matrix. Reassessment after his death led to different conclusions on these specimens, including on the construction of the skull.[17] The status of some of the species described by Cope is questionable, namely D. fritillus, D. gigas, D. incisivus, D. rectiformis and D. semiradicatus. There is a broad subdivision into species with a long skull from the Early Permian and species with a short head from the later parts of the Permian.

As a synapsid, Dimetrodon was distantly related to modern mammals. Synapsids were the first tetrapods to evolve differentiated, or heterodont, teeth. While reptiles barely chew their food, essentially gulping it down, synapsids like Dimetrodon developed teeth to help shear meat into smaller pieces for easier digestion. These "two-measure teeth" eventually gave rise to the various kinds of teeth present in modern mammals.[18]

Fossils are known from the United States ( Texas, Oklahoma, New Mexico , Arizona , Utah and Ohio ) and Germany, areas that the first parts of the Permian were part of the supercontinent Euramerica. Most fossil finds are part of lowland ecosystems, during the Permian would have been vast wetlands. In particular, the Red Beds of Texas is an area of great diversity of fossils of Dimetrodon species and other species from the Early Permian.[19] The fossils date from 290 to 270 million years ago, which means it lived from the Cisuralian to the Guadalupian period. Dimetrodon probably developed from a Sphenacodon-like ancestor. The climate of the Late Carboniferous (Pennsylvanien) and Early Permian (Asse Lien, Sakmarien, Arti Skiing) resulted in warm, humid ecosystems in subtropical and tropical zones, consisting of vast wetland areas. In addition there were large ice sheets on the Southern Hemisphere that stretched to about 30° south. The fauna was concentrated in this period therefore in tropical and subtropical zones. Aquatic and semi-aquatic tetrapods dominated, while land predators as Dimetrodon were largely water-fed animals. The Early Permian had a drier and hotter climate where deserts began to develop. This led a climate change causing major extinction of the tetrapods, thus clearing the way for the development of therapsids. Dimetrodon was replaced as an apex predator by carnivorous therapsidens like Biarmosuchia and Dinocephalia.[20]

Naosaurus painting by Charles R. Knight, which was based on a composite of Dimetrodon and Edaphosaurus